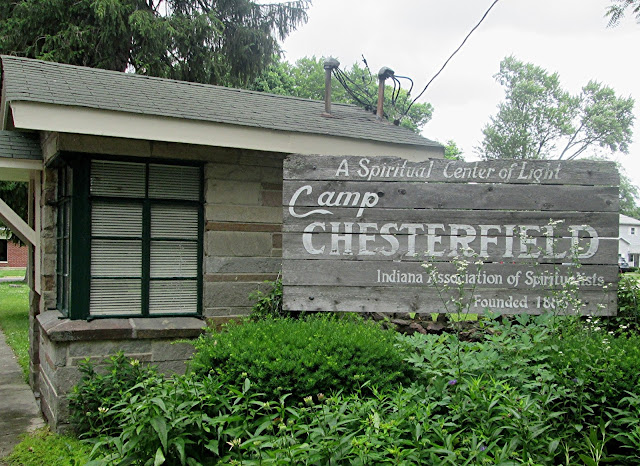 I have been a blue salmon,
I have been a dog, a stag,
a roebuck on the mountain,
A stock, a spade, an axe in the hand,
A stallion, a bull, a buck,
I was reaped and placed in an oven;
I fell to the ground when I was being roasted
And a hen swallowed me.
For nine nights was I in her crop.
I have been dead,
I have been alive.

....from "The Song of Taliesin", an ancient Celtic Bard 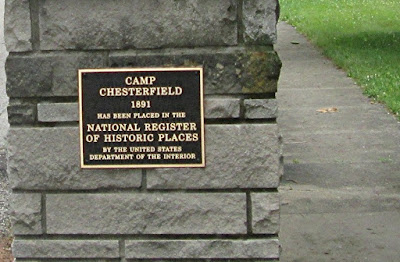 Well..........synchronicities and grace abounds on this journey!


Enroute to a brief visit to Lilydale and Brushwood, with an exhausting drive ahead, I thought to stop at Camp Chesterfield, about 35 miles above Indianapolis.  I vaguely was heading to Lilydale to get a reading, and longed to just walk in the old growth woods of a highly energized place.  I had heard of Camp Chesterfield, another Spiritualist center established about 130 years ago, not long after Lilydale was formed.  I managed to find it, and the little town of Chesterfield, just about dusk, and realized I would barely have time to find a motel somewhere, as the old hotel was not open.

I stood there somewhat dismayed in the gathering twilight.  But when I asked directions of three friendly people where were walking the grounds, they invited me to walk with them.  In the course of the walk, one of them, a resident medium, invited me to stay at her house,  and I ended up spending the week at the home of Normandi Ellis, who, it turned out, desperately needed someone  to help with the photos for her book - which needed to go to her publisher right away.   I mentioned that I was an artist and had Photo Shop in my laptop - and in the course of the next two days we illustrated the book and off it went on time. Her publisher is Inner Traditions, and the book is about Egyptian spirituality.  Normandi got her illustrations, and I got to experience Camp Chesterfield!

Normandi Ellis has led many trips to Egypt, and is a Priestess of Isis, as well as a medium and clairvoyant, poet, teacher and author.  She knew many people I know, from the Fellowship of Isis, including my good friend Mana, and had just attended an event my ex husband was at! 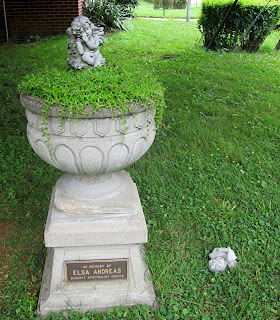 I guess I was where I was meant to be, and still am, as I will remain until Monday in order to attend the opening of their season and to celebrate the Summer Solstice.    Camp Chesterfield must have had a huge following in its heyday - there are two hotels (one is not used), meeting halls,  temples, and beautiful grounds with old growth trees.  It's population has decreased, and it is not as prosperous or populous as Lilydale in New York - sadly, a number of the old summer houses are empty.  Perhaps new blood will come to revive and fill some of those old houses, because it is full of light, and the mediums I met here are impressive.

I had a reading with Patricia Kennedy, who is a long time medium and resident of Camp Chesterfield.   She's a lovely, funny, energetic woman in her 80's.  She was amazingly right on - without knowing anything about me, she told me she saw Florence (my mother's name) with Glenn (my brother), both deceased this year, and that they were happy.  She saw my mother with flowers,  in particular roses, which was very true of her.  She was always a prize gardener, and grew up in Pasadena, California, home of the Rose Parade.

Patricia cleared up some important questions for me, emphasizing that this year was about the end of my old life, and beginning a new life.  With the death of my mother I  am no longer a caretaker, and new opportunities open for me.  Patricia said that I had been "paying off Karmic debts", and now that time  was over.  She brought up my focus on the Earth, elementals, herbs, and my need to find balance and new commitment - which was true also.  As I drove a few days ago, I thought about my long fascination with earth mysteries, my disappointment that I will not be visiting Avebury this year, and my desire to do a series of "Earth Shrines and Reliquaries".

Something surprising.......she said that in a past life I had been a Rabbi.  I thought immediately of how, when my daughter was born (I was 17, and like many young women of my time, had to give her up for adoption) I requested that she be adopted by a Jewish family, even though I am not Jewish.  And she was.  Strange, now that I think of it, that I would make that request..............

Patricia also mentioned, in her trance state, my need for Balance.  This is surely true for me personally, and I  also think of my long dedication to the arising of the Divine Feminine within  today's world  - "restoring the Balance" to the sanctity of the Earth and the human imagination.   So, I got what I came for..........a reading  that truly made me feel I was visited by my mother and brother, which gave me comfort and helps to release them and move on.  And affirmation of a new direction in my life as well. 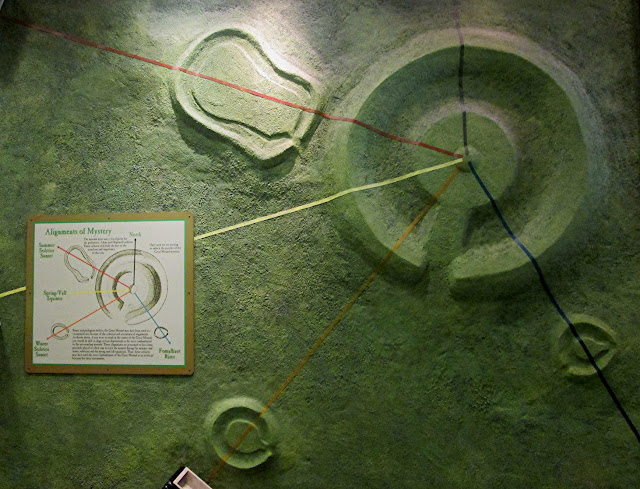 Mounds State Park  is  a very lovely Native American sacred site.  Camp  Chesterfield is  not far from the Park, and it seems to me as a dowser (and the residents of Camp Chesterfield say as much as well)  that both sites are related, perhaps part of the same sacred or ceremonial landscape.

Remembering  Avebury and most stone circles to be found in the UK and Europe, the Great Mound here in Indiana at Mounds Park is a Henge.  It's not on the scale of Avebury, of course, but a Henge it is, with alignments apparently to the Solstices and other celestial phenomena.  It is fascinating to contemplate that this similar structure occured in America, far away indeed from the ancient ceremonial landscapes of Avebury and Stonehenge - and that the henge structure was significant to ancient Native Americans.    The land feels indeed highly energized.  Some areas, as I walked through the park, took my breath away with the sense of geomantic energy.    It's not easy to see the shapes of the Mounds as the area is fenced and also has many ancient trees growing in the site, but circling it allows one to get an idea. 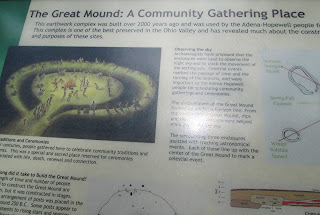 The site is about 2,000 years old, created by the pre-historic Hopewell peoples, and was apparently not a site they lived at, but rather a place they visited probably, as in many other sacred sites for ceremony and gatherings.   Like the many European and United Kingdom sites, there is no evidence that the Mounds were used as burial sites either, at least, not until over 1,000 years later in their history.  A sacred place, employing geomantic potency, revered by the unknown Native American peoples who built it so long ago.

It makes sense that Camp Chesterfield was built nearby.  In fact, synchronistically, I received an email from Geomancer Sig Lonegren a day ago, and reading, thought of an article he wrote in his Blog in which he brought forth the idea that the original function of the sacred sites was to amplify the effect of geomantic potency so that, in essence, the ancients could "speak with the earth and the spirit world".

Perhaps the builders of the Great Mound were pleased to see the Spiritualist community Camp Chesterfield arise in their sacred landscape.  And I feel blessed by all of this. 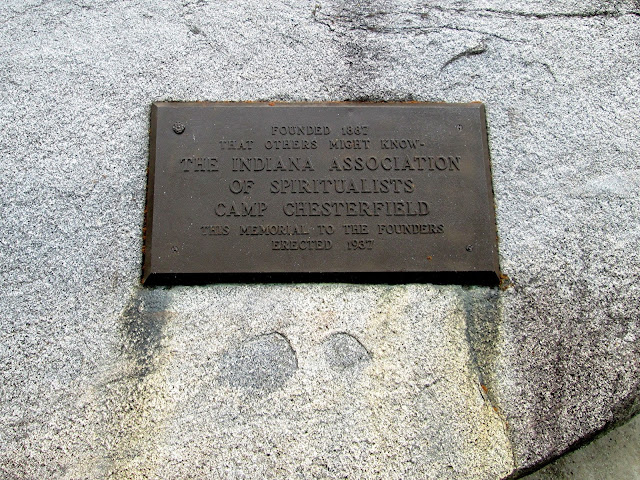 Wow! Another string of synchros for you, Lauren. It sounds like you were in the right place at the right time, too. Your reading sounds terrific! Maybe you should live on the road, like a female Kerouac!

Lauren lives like a female Keroauc. This from the first 10 principles of Belief and Technique of Poetry by Jack Keroauc.
1. Scribbled secret notebooks, and wild typewritten pages, for yr own joy
2. Submissive to everything, open, listening
3. Try never get drunk outside yr own house
4. Be in love with yr life
5. Something that you feel will find its own form
6. Be crazy dumbsaint of the mind
7. Blow as deep as you want to blow
8. Write what you want bottomless from bottom of the mind
9. The unspeakable visions of the individual
10. No time for poetry but exactly what is

She lives the principles of the Beat. Lauren you can come and visit me any time.
She you at the upcoming Goddess conference.

Thanks to both of you greatly! In truth, I do try.........even through as right now I have been outrunning a tornado off of Lake Erie, it seems, a little too exciting.........well, the tornado is back there, and I'm here drinking coffee. Love to all!