In 2007 I was an Aldon B. Dow Fellow at Northwood University, in Midland Michigan, for the summer, and was pursuing my fascination, indeed, obsession with, myths and symbols related to the Native American Spider Woman, but as She appears in my life, and in our contemporary world as well..  In time my obsession led me to travel across the country, to have many synchronicities 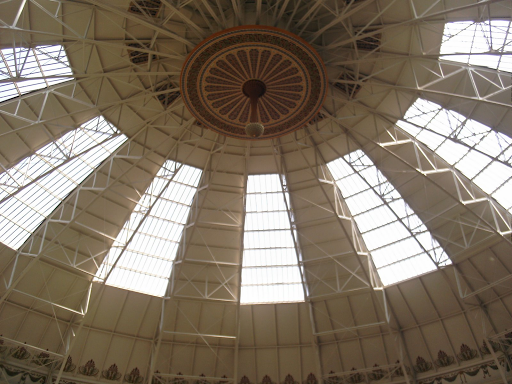 (one of those synchronicities led me to this building, which,
now that I revisit it, very much looks like being under a giant Spider Web!)
and to create a community arts project I called "Spider Woman's Hands". 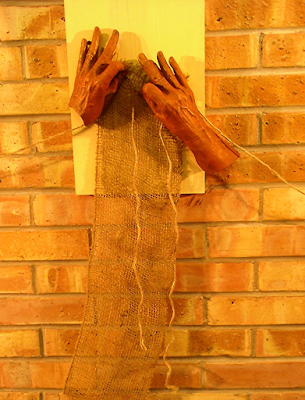 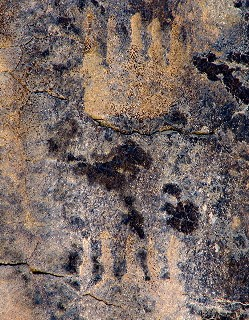 The Project was continued at the Creative Spirit Center the following year (2008). As participants created "Icons" using casts of their faces, their hands (mind and creativity in manifestation), along with symbols of personal sanctity or significance to each participant, they wove a "thread" that unified all of their stories.  In each show that "thread" was "held" by each hand in each Icon, and ran right out the door.  I look back at that time, following the "threads" that Spider Woman cast me as an artist and a person, as infused with magic and guidance.  I do not know if I have fulfilled that quest yet, but I do know that the symbols of the Spider, the Cross representing the union of all directions, and the Great Web are profoundly important symbols not just from the buried past, but for our time now.
Lately I've been feeling the "hand" of Spider Woman weaving in my life again.  I do not know where She might lead me...........
So thinking about this I re-discovered a Blog post from 2015 I found fascinating, information kindly sent me from a gentleman named Eddie Bailey in the U.K. in which he pointed out that the Earth's  magnetic field in its appearance is very similar to the prehistoric spider and cross  symbol found among the Mississippian people of  ancient America (one that, interestingly enough, also occured in 2005 as a crop circle in Wiltshire, England.  I do not see that many people in Southern England, hoaxers or not, would even know about this symbol, and personally feel this is a genuine crop circle.)
The "Cosmic Spider".....a  motif, for me, that embodies the concept of Spider Woman as, once again, midwife for a New Age.
http://geomag.usgs.gov/about.php

As Mr. Bailey pointed out,

"The truth will cease to be stranger than fiction when we get used to it."........ "I realise symbols work on many levels or fractally.  It is said matter is condensed light, and Light is an electro-magnetic wave or particle.  The electric field and the magnetic field are ALWAYS perpendicular to each other - like a Cross on a certain level." 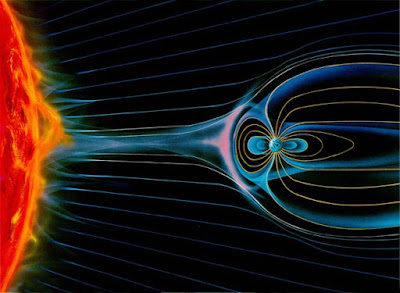 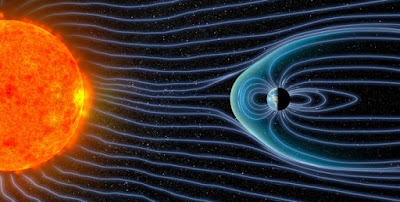 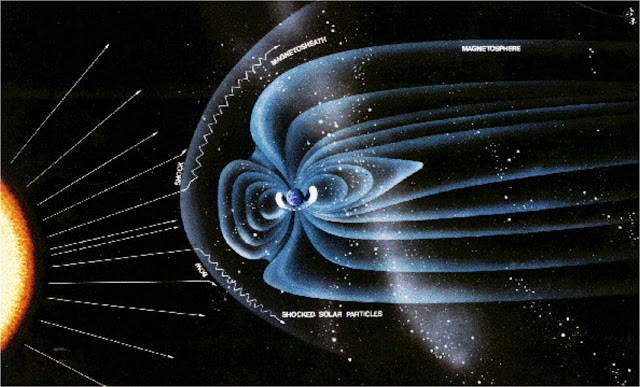 He also kindly shared comments by Laid Scranton, who believes that the "primitive people" of Africa, the Dogon people, not unlike  the similarity between the  "cosmic spider" of ancient America and the Earth's magnetic field in relationiship to our sun, seem to have created or intuited a complex symbol language as well:

"The Dogon symbols and concepts relating to atomic structure so thoroughly mimic their scientific counterparts that, if our purpose was to refute their basis in science, we would first need to explain in some believable way the following extraordinary similarities:

• The po, which is defined in terms similar to those that describe the atom
• Sene seeds, which are described in form and behavior as being similar to protons, neutrons, and electrons and whose "nesting" is recognizable as an electron orbit
• The germination of the sene, whose drawn images are a match for the four types of quantum spin particles
• The spider of the sene whose threads weave the 266 seeds of Amma, much as string theory tells us all matter is woven from strings.

Likewise, there seems to be a relationship between Dogon cosmological drawings and the shapes of various Egyptian glyphs, yet among the Dogon, these drawings have never taken on the status of an actual written language.

Dada, the Dogon spider who weaves matter and whose name means "mother" in the Dogon language, exhibits many of the classical attributes of the Egyptian (and Amazigh) goddess Neith.  In fact, other ancient goddesses, like Athena, who are traditionally associated with Neith also are associated with spider symbolism similar to that found in Dogon cosmology. Such consistencies suggest that the Dogon system of myth could represent an early incarnation of the Egyptian myths." 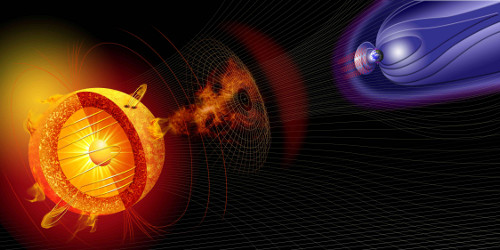 Posted by Lauren Raine at 9:49 AM No comments: 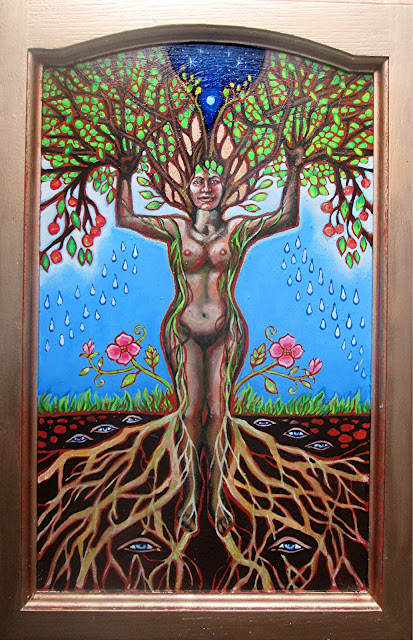 I've been interested in Catholic Icons for a long time, as well as Hindu and Buddhist Icons.......so I thought, since I'm having a lot of fun experimenting with painting again after so many years of not touching the scary gessoed  surface...........that I'd make some Icons of my own.  This one, dedicated to Asherah, or the "World Tree", is my first attempt, although I've done this image so many times in the past, the woman who is rooted in the Earth, the Tree of  Life, the great primeval Mother Earth.  But it was fun doing this because I could just paint from my imagination, unconstrained by the sometimes tedious process of being skillful, realistic, commercially viable, etc.  I look forward to doing more, these Icons for just myself!

Concerning Asherah, I copy below from a previous post:

Asherah  was often represented as a tree, among them the ubiquitous  "Asherah poles" (ashirim)  associated with Her worship in early (pre-monotheistic) Judaism. *** There is evidence that these wooden icons, and possibly, actual trees intentionally planted as icons or shrines)  were meant to be representations of Asherah.  Asherah is  sometimes  referred to as the wife of Yahweh,  whose name became something that could not be uttered, only represented as "the Lord".  The Asherah poles, and eventually the name of Asherah, were banned from worship as Judaism became monotheistic and established the sole deity as male.

The healer, after the session was over, told me that she clearly saw a Goddess form present during the healing.   The healer, who is not much familiar with Goddess archetypes,  said that the name she got was "Ashara".  She also mentioned that somehow trees or wood were associated.  I couldn't think of what that meant, until I looked it up on the Internet later, and then (of course!) discovered the Hebrew Goddess  "Asherah". 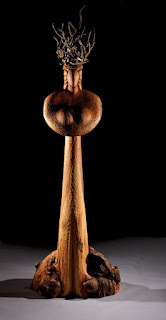 Visions, like dreams, have multiple layers of meaning, and like dreams, exist outside of time.  In my experience Spirit communicates in visionary, symbolic, mythic ways, often from the great "library" of  human archetypes.  This visioning was a blessing for me, and something I will continue to contemplate and ask to understand.

Raphael Patai identified the pillar figurines with Asherah in The Hebrew Goddess.
Posted by Lauren Raine at 7:47 AM No comments:

Posted by Lauren Raine at 9:30 PM No comments: