Afterward - Syncronicity and Spiderwoman in Indiana 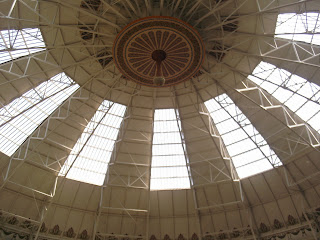 The moon is full and the night is very hot, somewhere in Missouri. Cicadas drone their mating calls, an August chorus. I’m still allergic to everything, wondering if my dignity is forever gone along with the use of my nose. But Magic has been afoot. Quite often I don’t write or talk about days like this, because I doubt others will see the wonderful intersections and weave that I see, worse, we'll try to figure out what it all "means".

Syncronicities are Spider Woman's way of saying "hello".
When synchronicities chose me, or I blunder into them, they flurry about with such literary qualities that I sometimes think its like being inside a novel where the plot is about to become clear. Ephemeral, transparent, funny, poetic strands.

“Tse Che Nako, the Spider,
is sitting in her room thinking of a story now.
I’m telling you the story
She is thinking.”
I had my map on the motel bed, ready to open yesterday a.m. I was thinking about two things. The first was the fact that I was 30 some miles from industrial Gary, Indiana, and the road was apparently flooded there. This could mean hours getting through Gary. And then there was Chicago. The prospect was not appealing. The other item on my mind were my friends Morgana and Phil, who live in Indianapolis. I’d been thinking of visiting them since Spring, but now assumed it was too late to just “pop in” unannounced.

I glanced at my dog-eared map, which had long ago lost its cover. Now the cover was page two of “Routes of Interest”, and my eye fell on “Indiana” (right in the center of the page, with “Louisiana” below it.) The authors suggested I take a scenic drive through West Baden and visit historic French Lick Springs. The prospect of possibly discovering a new hot spring seemed attractive, and I opened the map to find that I could head on down to Indianapolis, maybe convince my friends, on short notice, to have dinner with me, and if not, take a hilly route to a possible soak and end up on 64, which would eventually lead me to route 70, across Kansas, and the welcome road to Colorado.

The moon was fulling, and butterflies kept flying in and out of my field of vision. I decided a trip to Indianapolis was a good idea, and headed down the road, taking my bearings at Roseville. I would follow the “rose line”, a symbolic idea related to the Goddess that I’ve been thinking of before the Da Vinci Code.

I wondered why the place was called French Lick. I later learned that the area, before it was settled by white people, had been an important migration route for buffalo because of salt licks in the area. The new settlers had literally followed the buffalo to the wells. The first Europeans to settle at French Lick were French Jesuit missionaries, and one of the first businesses established in the area had to do with salt mining.

“Routes of Interest” informed me that I could have a soak at the Pluto Baths for $20.00. This is no longer true - any soaking areas where the public might have once taken the curative waters are now replaced with expensive spas. I don’t know why they were called Pluto Waters either, but there on the ceiling of the French Lick Spa were huge, Rococo, paintings of Pluto, Persephone, Orpheus, Eurydice, Cerberus, and the Underworld. 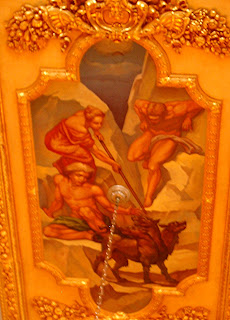 I felt a bit like I was within a personal mythic event, because the myth of Persephone and Hades has been significant to me for many years - my little novel, THE SONG OF MEDUSA, was based on it. I have identified with the Persephone archetype strongly in my past - Jennifer Barker and Roger Woolger wrote eloquently about this in their 1989 book "The Goddess Within", a book that informed much of my interest in Goddess spirituality. A page mark in my own story. It is interesting to note that Pluto means "wealth". The wealth of the below, the hidden, the depths of the earth. Or, as Robert Bly has pointed out, the inner life of the psyche:

"Pluto, or Hades, took Persephone downward and inward. She went to live with Pluto, whose name means "wealth", and so all of us go, when we go into "walled garden" to encounter the wealth of the psyche, which is especially rich with grief." (Iron John, 1990)

What the area meant to the native people who lived there, I do not know, although I’m sure it was, like all places where healing waters bubble out of the earth, a sacred place. Maybe it was a place of pilgrimage, in the same way that people still go to the Chalice Well in Ireland. It is still a place where native people make Vision Quest. Where they go to "talk with the Earth". I thought of Phil making his prayer ties while he was there in the Spring for his ceremony, I thought of the Irish who still tie “Klooties”, which are essentially prayer ties, on bushes near holy wells and springs, and I thought about the prayer ties Kathy Space and I just created in Midland, resting on a podium at my show just a few weeks ago.

Morgana and Phil are extraordinary people, extraordinary healers. They’re a rare and complimentary partnership, Phil specializing in massage and physical therapy, and Morgana is a Reiki master, intuitive healer and psychic. In the past year they had begun working at a metaphysical store in Indianapolis, and their dream had long been to open a healing center of their own, but the financial means was never available. When I met them two years ago while we were camping at Brushwood, we took an immediate liking to each other, and I traded one of my Earth Shrine sculptures in exchange for body work with Phil, and Morgana gave me the first degree Reiki initiation and I’ve often used the Reiki to ease breathing when I’m asthmatic. Both Morgana and Phil exude energy. Phil has participated in the Sun Dance for years.

When I got to Indianapolis, I met them at a Border’s bookstore, and they took me to the metaphysical center where they worked. Indianapolis - my mind was full of judgmental images of hostile rednecks, motorcycle races, and my fear of Baptists.

Many of my lessons this year have been about tolerance, and learning that I also am walking around with many assumptions and judgments that get in the way of what I preach. If the “Hoop of the Nations” Black Elk envisioned is going to manifest, if the unity of diversity within Spiderwoman’s Web is going to harmonize - well, the process begins within each one of us. And so, waiting for my friends in a bookstore in Indianapolis, I idly picked up a local paper, which had a beautiful painting of Gaia as the Tree of Life right there on the cover. How many times have I painted this image myself?

“Never Make Assumptions” The Four Agreements
Morgana gave me the 2nd degree Reiki initiation. Then Phil worked on my eternally stiff neck, and I joined Morgana’s healing class where we did a meditation, and invoked Thoth, also called Hermes by the Greeks, god of healing, the god who brings “messages“. (He was on the ceiling of the French Lick Spa as well. Go figure.) By the time we had dinner, I was buzzing with energy. 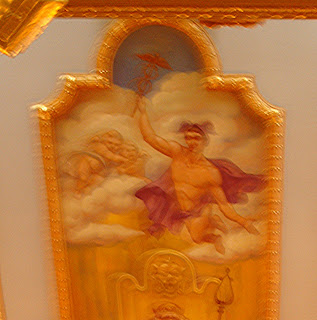 My strand to weave this summer has been about coming out of the depression and disillusionment (and health issues) I’ve been mired in for so long, to become clearer, detox my spirit as well as my body, and begin a new year truly new. To re-weave my spirit back into the Web, into a renewed experience of connectedness. To open my heart again, which has become closed in many ways, for all my talk of unity. I’ve just had my birthday, in fact, I left Michigan on my birthday, August 19th, which seemed fitting. The ritual process was not just designed for the community of Midland, Michigan, but was my personal ritual process as well.

I learned that Phil went on his Vision Quest, preparatory to doing the Sun Dance this summer - at the state park in French Lick. The heart of French Lick is the recently restored white towered building behind formal gardens - West Baden Springs, “The Carlsbad of America”. This historic building was once called the “8th Wonder of the World” because it boasted the largest suspended glassed dome in the world. Restored finally only within the past year to its original turn of the century splendor, 6 stories of guest rooms, spas, restaurants, and bars encircle a huge sunlight center, with inlaid marble tiled floor, and statues of the muses. Its stunning, an amazing architectural feat. I felt the ghosts all around me of a more elegant time, the guests come to "take the waters".

Here’s the synchronicity that tops them all. After the stock market crash of 1929, the owners. Bankrupt, sold the famous resort to the Jesuits for a dollar. For years it was a Jesuit seminary until 1967, when it was purchased by the Whitings of Midland, Michigan, and became a campus of Northwood University until 1983. Northwood, on whose campus I had just spent the summer! After that the building sat desolate until it was restored just this year!

Spiderwoman is still with me. I proceed down the road, awed. 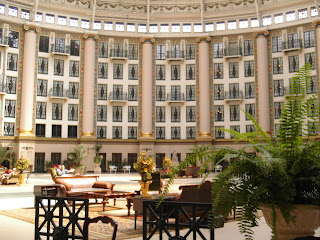