Syncronicity and the Stories of our Lives 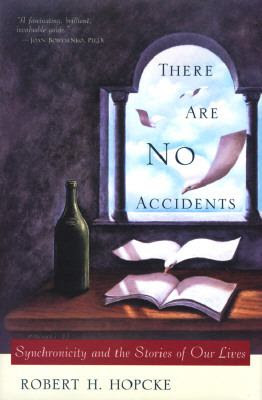 "The stories that we live, the stories that the symbolic nature of syncronistic events bring to our awareness, are mythic. Yet how many of us think of ourselves as characters in a story, no less as characters living out a myth? The unusual occurance of a syncronicity serves to heighten our sensitivity to the sacred and symbolic dimension of our everyday lives. But why do so many of us resist such a way of thinking? Why would we want to dismiss or ignore the story we are living?"

Robert H. Hopcke
THERE ARE NO ACCIDENTS - Syncronicity and the Stories of Our Lives
Riverhead Books, 1997

Back in Tucson now from Chautaqua Country and my residencies (including my show based on the Spider Woman legend at the Midland Arts Center in Michigan), and it seems, Spider Woman's threads fall across my path still. The subject seems to be Syncronicity - something I'm always aware of, and think so often about, and yet veer away from because of my (human) tendency to immediately imbue each experience with "meaning" and a personal destiny. I don't believe it's that simple, although I do believe the phenomenon of Syncronicity has to do with the nature of consciousness itself, interconnectivity, and Weaving.
Perhaps the best way to understand them, for me, is to think of them as Spiderwoman's Way of Saying Hello.

Two syncronicities greet me on my return......the first as I was unpacking. I found a little pack of souvenir cards I picked up in Beatrice, Nebraska when I went to visit my grandmother's grave in June. The first card on the top of the deck was - Chautauqua! 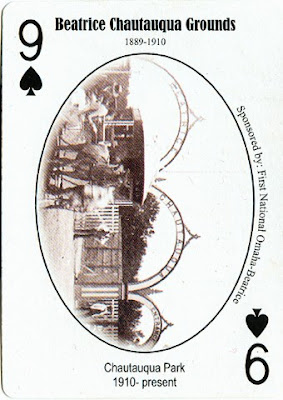 Honest! Here's the other: Opening my email, there was an order from a woman who wanted a mask. I learn that Teri lives in Indiana, so I told her about my enthusiasm for the area I had just visited in Indiana on my way home -  French Lick and West Badon Springs, home of "Pluto Water".
Guess where Teri lives? In Jasper, just down the road. Her son worked in the French Lick spa while the murals were being re-painted (the rococco painter was imported from Hungary). And she also tells me the reason it's called "Pluto Water" was probably because of the high sulpher content, which perhaps equated the springs with the underground realm of the god Pluto in the minds of the first European settlers. She tells me also that her son saw statues and other mythological artifacts of Pan, left over from the earlier days of the spa. Apparently the Jesuits confined them to the basement long ago, and there the old horny boy still resides, still too risque for the prudish locals.*

Well, I'm back in Tucson, and once again, my creativity seems to dissipate like water evaporating into the desert sand. I don't know how much longer I can bear to live here, because outside of love and responsibility for my very elderly mother, I've never been able to really feel I belong here, although I know many people who do. Arizona is the fastest growing state in the country - and now, ironically, with real estate speculation and developers foaming at mouth in ecstasies of greed - the arts district is almost extinct.  Who needs art when you can have a fancy wine bar? 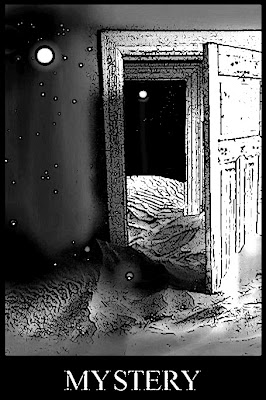 Syncronicity - sometimes it's so funny I have to laugh. I pulled out a book I bought in 1998 by a Jungian psychologist then living in Berkeley, California, Robert Hopcke. Here's a story that I swear is true, about a series of syncronicities that led me to a new passage in my life, to opening Rites of Passage gallery in Berkeley, and to creating the Masks of the Goddess series, so fraught with Spiderwoman's threads that it's virtually a tapestry.

In 1997 my ex husband, Duncan, and I finally divorced and my life in New York with him, and our community there, wholly ended. I left the East Coast in November 1997, shortly after the papers finally came through, to winter at Apache Junction (I had a trailor on the Arizona Renfair grounds) and sort out what was next, as well as giving myself the time to grieve and process. It was a time of enormous psychic and emotional opening for me. I had begun to follow a trail of syncronicities and signs earlier that year, touchstones - if for no other reason than that I felt so lost and unsure about everything. It was a "year of magical thinking".

During that fall I remember I had been sitting at a bench at the Maryland Renaissance Faire with my morning coffee, thinking about the internet, which I had just become interested in as I had just purchased my first computer (which I didn't even know how to operate much yet). I looked down, noticing something shiny at my feet. It was an earring - a silver spider web! I put the earring on, feeling it just might be a sign of some kind, and sure enough, a few days later I was approached by an aquaintance  who was starting a website business. Would I be interested in a website? They offered me a very good deal, and within the month I had my first computer, and we were designing my first  website, http://www.rainewalker.com/

In Arizona, I began to learn about my computer in earnest, and to learn to navigate the (still very young)  Internet. I wore my silver spiderweb earring always in my ear, imagining it a talisman from Spiderwoman that would, surely, somehow, lead me to the connections I was meant to have. And my prayers were mostly..... "what's next, Universe? Where do I go from here?"

One day I got on the Internet and searched for just about everything I could think of that I was interested in (since my laptop was Windows 3.0 dialup, this took some patience). I searched for Transformative Arts, Ritual Theatre, Mask Theatre, Healing Arts, Creation Spirituality, Sacred Dance........ and every time, absolutely every time, it came up Berkeley, Marin County, or San Francisco, California. Every time.

What finally clinched it was when I looked for "the Center for Symbolic Studies", a place in Rosendale, New York, created by Steven and Robin Larsen, where I had presented a performance, offered a workshop, and both of whom I knew personally. I wanted to get a letter of recommendation from Robin.

It came up "The Center for Symbolic Studies" in Berkeley, California, and belonged to a  Dr. Robert  Hopcke, who had just published a book called: THERE ARE NO ACCIDENTS - Syncronicity and the Stories of Our Lives!

Well, that was enough for me. At the end of my season, I packed up my van and cat and headed to Berkeley, California, where I hadn't been for over 20 years. Twenty years can bring a lot of changes, and fortunately for me, I still had in my mind the easy going Berkeley of my hippie days. I had no idea, among other things, how difficult it could be to get a place to live there. But I was determined to follow whatever daemon, destiny, or folly was leading me on, and I resolved to sleep in my car until I found a place.

Arriving in Berkeley I parked near Telegraph Avenue, and headed for the familiar Cafe Med, where I used to hang out when I was at the University. I immediately ran in to someone, Joji Yokoi - who after 20 years still recognized me. Joji generously bought me a cup of coffee, and offered me a room in his house until I found a place to live.

I didn't have to spend a single night in my car, as it turned out. Not one.

Here's another one I "have on film"........ Can't resist sharing this syncronicity as well. The above is "Cosmic Cash" made by a lovely woman who lives in San Francisco named Nicole. I met Nicole through Alan Moore, the originator of the Butterfly Gardener's Organization, a network for World Peace. Nicole's Cosmic Cash is something she distributes for good karma and mindfulness whereever it's needed. And Alan, of course, knows more about Butterfly magic than anyone I ever met.

The photo below was taken from a photo published by the San Francisco Chronicle, shortly after the big Peace March against the war in 2003. Alan, Nicole and I marched together - I chose to wear the mask of Sophia, the Goddess who embodies peace, truth, and wisdom. Alan has his butterfly, me my mask, and on the right side of the photo - Nicole (standing with her back to the camera) - has her Cash. 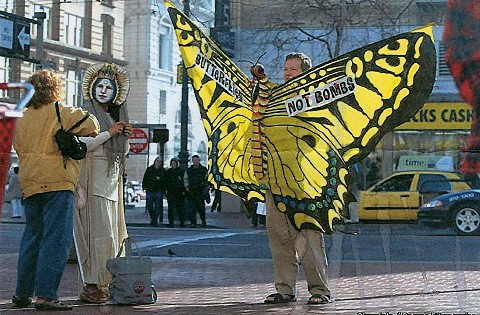 What are the odds?
Posted by Lauren Raine at 6:00 AM