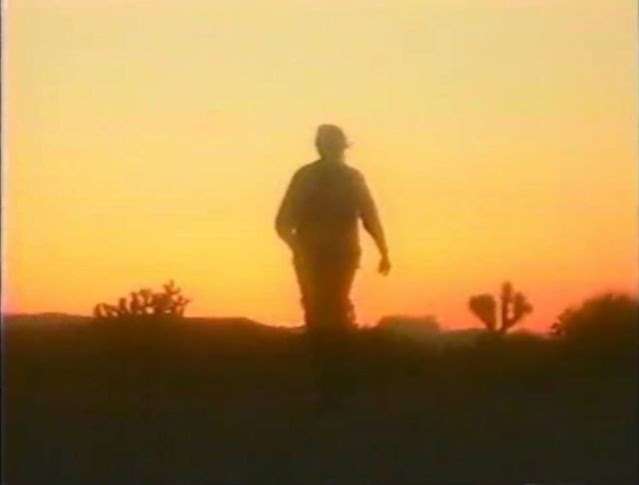 Peace Pilgrim was truly an American saint, and it is good to know and remember  in these cynical times that there are people like her in the world.

At age 44, Mildred Norman left her life in California and became Peace Pilgrim -- walking coast to coast for peace, living on faith, and sharing her wisdom and exhuberance generously with people across the land. Starting on January 1, 1953, in Pasadena, California, she adopted the name "Peace Pilgrim" and walked across the United States for 28 years. On July 7, 1981, while being driven to a speaking engagement in Indiana, Peace Pilgrim was killed in an automobile accident. At the time of her death, she was crossing the United States for the seventh time. Below is a 60-minute documentary about her life and message, which  includes are interviews with the  Dalai Lama, Maya Angelou, John Robbins, Elizabeth Kubler Ross, and many of Peace Pilgrim's friends, along with newsreel footage from the 1950's, 1960's, and 1970's. 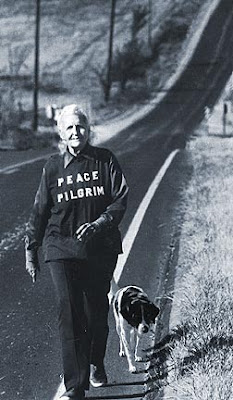 Peace Pilgrim:  An American Sage Who Walked Her Talk


"The second relinquishment is the relinquishment of the feeling of separateness. We begin feeling very separate and judging everything as it relates to us, as though we were the center of the universe. In reality, of course, we are all cells in the body of humanity. We are not separate from our fellow humans. The whole thing is a totality. From that higher viewpoint there becomes just one realistic way to work, and that is for the good of the whole. As long as you work for your selfish little self, you're just one cell against all those other cells, and you're way out of harmony."

Peace Pilgrim, in 1953, at the height of nuclear armament, took a vow to walk for Peace until all of humanity could live in peace. In her own words,

With nothing but the clothes on her back, she devoted her life to becoming "a walking prayer" for peace.

Q: Do you work for a living?

A:  I work for my living in an unusual way. I give what I can through thoughts and words and deeds to those whose lives I touch and to humanity. In return I accept what people want to give, but I do not ask. They are blessed by their giving and I am blessed by my giving.

Q: Why don't you accept money?

A: Because I talk about spiritual truth, and spiritual truth should never be sold - those who sell it injure themselves spiritually. The money that comes in the mail - without being solicited - I do not use for myself; I use it for printing and postage. Those who attempt to buy spiritual truth are trying to get it before they are ready. In this wonderfully well-ordered universe, when they are ready, it will be given. 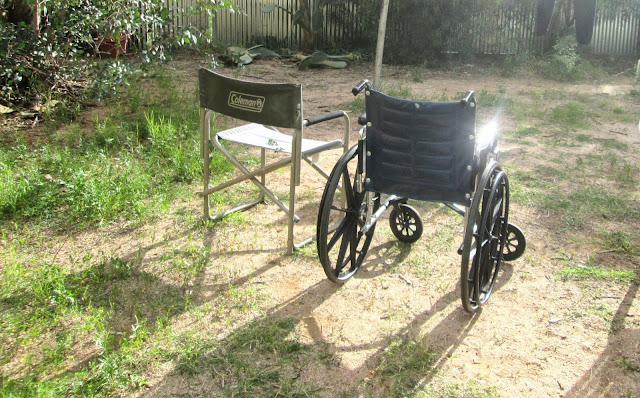 My mother passed away exactly a year ago, and my brother six months before that.   I took this picture of their chairs, in the place where they both used to like to sit and watch the sunset.   I miss them.
Posted by Lauren Raine at 10:33 AM 1 comment:

On the eve of the TPP passing and all those suits with pens signing away the future for more unlimited greed,  slave labor in China and Bangladesh, and disposible plastic gee gaws and "instant fashion" for us, this marvelous satire of the coal industry's executives in Australia is true of more than just that country.


***and, well, I couldn't help but throw in John Oliver as a Post Script.

To Earth the Mother of All

I will sing of the well-founded Earth,
mother of all, eldest of all beings.
She feeds all creatures that are in the world,
all that go upon the goodly land,
all that are in the paths of the seas, and all that fly;
all these are fed of her store.

Through you, O Queen, we are blessed
In our children, and in our harvest
and to you we owe our lives.
Happy are we who you delight to honor!

We have all things abundantly:
our houses are filled with good things,
our cities are orderly,
our sons exult with feverish delight.
(May they take no delight in war)
Our daughters with flower-laden hands
play and skip merrily over the soft flowers of the field.
(May they seek peace for all peoples)

Thus it is for those whom you honor,
O holy Goddess, Bountiful spirit!
Hail Earth, mother of the gods,
freely bestow upon us for this our song
that cheers and soothes the heart!
(May we seek peace for all peoples of the well-founded earth)