Requiem for the Red Apple Rest 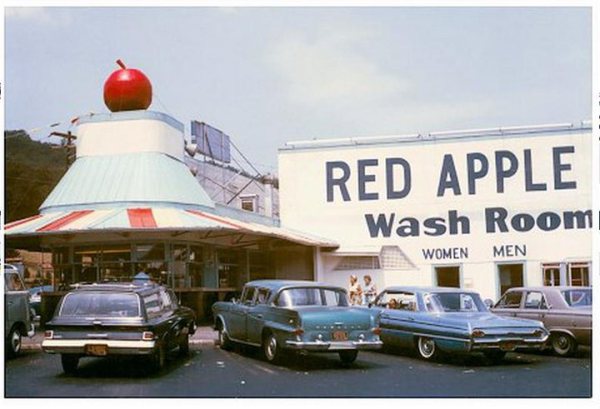 I’ve been a rolling stone all my life, so I’m understandably haunted sometimes by the different lives I've had, their flavors and fragrances found lingering in familiar places encountered up and down the "road" (Ha! Jack Kerouac had nothing on me). It's sad when “touchstones” from another era are gone, because they are touchstones from my story as well.

I’m sorry to say that this time around the bend on NY 17, I found the Red Apple Rest lying desolate by the side of the road, a hulking ruin.

I can't help but feel the Rest deserves a little requiem, because she represents to me the loss of a landscape I've seen all over the country, as the unique identities of American towns are continually replaced by Walmarts and Home Depots and Starbucks.  I would go so far as to say that most American towns look much the same - a decrepit downtown, with empty store fronts and thrift shops, and then, at the edges of town, the exact same Walmarts, Home Depots, and Burger Kings.

It's ironic that popular American culture is so preoccupied with "rebel chic", and "no boundaries" individualism. "No boundaries" or "no limits" seem to be buzzwords that can sell anything almost as well as a blonde woman with a low neckline. Yet a good look around shows a remarkably conformist culture, whose tastes and goods seem to be  determined by the interests of global corporate entities instead of the local "spirit of place".  Gone is that unique individualism that only local small businesses can offer to their communities, along with, frankly, the prosperity that once circulated from business to business within those communities.  The money does not circulate when Walmart replaces the many jobs that once made those goods, nor does MacDonalds replace the flavor and love of small town cafes and diners.
I've seen the same thing everywhere I go - from Bythe, California to Beatrice, Nebraska to Herkimer, New York - the old downtown sucked dry,   and  the same megastores on the peripheries of town, sucking up the local economy and character.  Anyway, my story...........
In 1980 I rolled onto the old NY Route 17 just before the town of Tuxedo (that’s where “tuxedo” comes from), and discovered the Red Apple Rest Diner. Before the interstate was built, Route 17 was the highway everyone took out of New York City ("the Borscht Belt") as they headed for the cool summer resorts of the Catskills and beyond. In the 40's and 50’s, station wagons filled with restless kids stopped at the Rest for hamburgers, and teenagers in fast cars had cokes on their way to dance halls up the road.

The Red Apple Rest was a unique building in it’s time – a diner that could accommodate busloads of people bound to and from the city, with lots of room outside for souvenirs, hot dog stands, and an ice cream stand as well. It was pleasantly decrepit by the time I discovered it, much of its business having disappeared, but the Greek couple who owned it still served eggs and toast and rice pudding.

It was full of stories and friendly ghosts, and a potted vine that grew for at least a mile across the ceiling, perhaps reminding the owners of their Mediterranean homeland.  I was there every summer to live and work at the New York Renaissance Festival as a craftswoman and a tarot reader.   Peter named me "Sophia" and for all my appearances of 15 years he always greeted me with “hey, Sophia”. The Rest was staffed with his children (who kept growing up) and any number of odd relations he seemed to import from Greece. 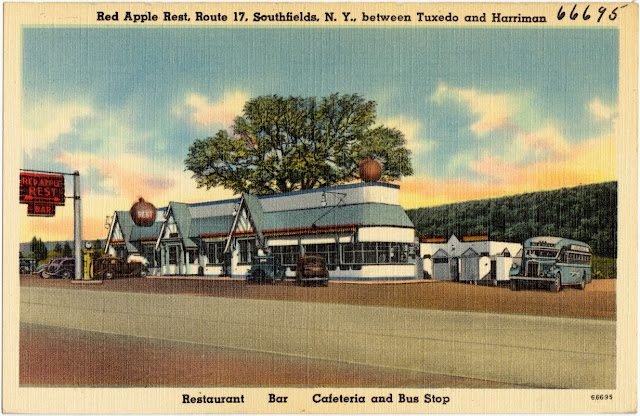 In other words, the Rest was full of human eccentricity and the passage of generations, including, of course, those before Peter and his family bought it.   It was a unique, warm, welcoming place you became a part of by walking in the door. There was no “take-out” - disposable was long before its time, and both Peter and the spirit of the Rest wouldn’t permit that wasteful (or perhaps just plain unsociable) sensibility.

Dishes were ceramic and bussed by the dishwasher. You sat down for a while at a wooden table, and watched the world go by. The Rest didn’t accrue piles of disposable waste - but it did accumulate characters from the road, as well as locals who were always there to hang out, along with beribboned Rennies like myself, the exotic summer guests, fluttering about with our own costumes and dramas.  In fact, I had my first date with my (now ex) husband there, talking for hours over coffee while the rain fell outside.  I also aquired a beloved cat, Shiloh, from the Red Apple Rest  (the kind hearted cook fed the strays out back scraps, and every year had kittens to find homes for.)

Farewell to the Red Apple Rest, and perhaps, to an era I can't help but feel was slower, but more gracious, much more welcoming.

I love these old places! I found a 1940s era postcard in my late mother's
treasure trunk, of Clifton's Cafeteria in LA. So many stories: I think the
Muses dine at these places!

Speaking of muse. Have you heard of Lithuanian artist, Mikalojus K. Curlionis?
Poor chap died of pneumonia whilst a patient in an asylum. I suspect they
were a bit heavy-handed with the cold baths and hydrotherapy to cure his
depression. His wife's name was Sofija.

Asteroid 2420 Curlionis, a peak in mountain range, and a cliff somewhere is
named after him. I do wonder about earth shrines and whether they become
activated, or charged, when a human name is applied to them.

The gods are everywhen and nowhere. I'm betting Idunn's apples that you'll
make some connections.

I know just what you mean and how you feel! It seems every area of the country has crumbling and neglected relics of the past.

How funny, Rain - I actually used to go to Clifton's Cafeteria in L.A. with my mother and grandfather (we lived in LA) - it was a favorite place of theirs. I don't know about names, but I am certain that earth shrines and other places become charged by human activity and intention...........reciprocity. And thanks for the good wishes!