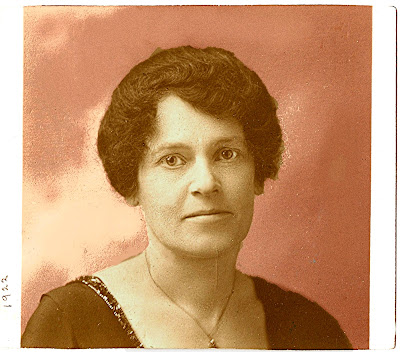 I called my previous post "Angels in Indiana", and felt like posting again a previous story I called "Angels in Nebraska"......... it just seemed to want to be told again.  I seem to become so "mundane" when I land anywhere, that perhaps Spirit waits until I'm in my car and on the move to contact me.  Or perhaps it's just that that liminal zone of travel takes us outside of the preoccupations of our daily lives and brings us full tilt into the here and now, that place where the imaginal can happen, friends in spirit can speak, and angels can give us a  nudge when we need it.

~~~~~~~~~~~~~~~~~~~~~~~~~~~~~~~
My paternal grandmother, who I loved very much as a child, was named Glen. Glen was from Nebraska, and she married my grandfather, who died long before I was born, when she was in her 20's.  He was considerably older than her, and died leaving a young widow in a small farming town with a toddler to raise.  Perhaps she had no other choice but to leave her homeland for economic reasons, or perhaps she wanted to make a new start; but whatever her reasons may have been, my grandmother went west to California.  Settling in Los Angeles she worked as a seamstress.

When Glen developed dementia in old age, my father would not put her into a nursing home, but confined her to a room in our house. When we went overseas  in 1963 (he worked for U.S.A.I.D.) she went with us, and lived her last years in our house in Kabul, Afghanistan, where he was stationed.  When she died  in 1966 my father took her body back to the States, to the little town of Dewitt where her husband was buried. It was never discussed again, and  I was never allowed to grieve for her.

In 2005, I was driving cross country to a residency at IPark Artist's Enclave  in Connecticut. In New Mexico I stopped at a rest stop for lunch. Sitting at a picnic table, I noticed something shiny under the table.  It was a a pair of pliers, Expensive looking pliers ........so, since no one was around to claim them, I threw them in the trunk of the car when I left, and promptly forgot about them.

Somewhere around Missouri, I had the idea of taking a little detour to see if I could visit my Grandmother's grave. No one had been there since my father took her body back for burial  all those years ago, and if I didn't go, no one ever would again. I wondered if the little town of Dewitt even existed still? But there it was on the map, not far from Beatrice.
So I headed north, visited the Nebraska Prairie museum, found Dewitt, and found at last the little graveyard.  I remembered visiting that graveyard when I was a child. Mostly  I remembered the Black Eyed Susans (a sunflower like wildflower)  that were ubiquitous - so that's what I planted at her grave.

Then I explored Dewitt, a town of about 1,500 people. Dewitt, surprisingly for such a small town in the Prairie Lands, seemed to be prospering, due to the Tool and Die company there, which was founded by a Danish immigrant named William Petersen in the 1920's. There was even a little Dewitt museum there with historical information, and a bronze statue of Mr. Petersen was proudly displayed on the green lawn at its entrance.** 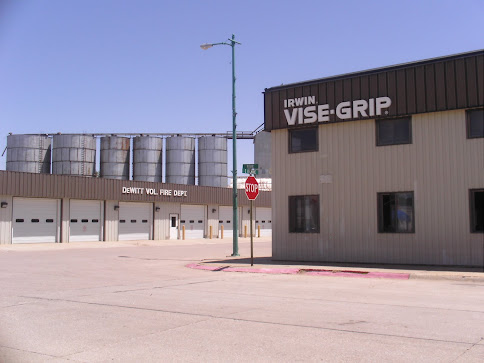 It should be obvious where this is leading, but it was not so to me at the time.  I went on down the road, happy about my detour to my Grandmother's grave, and ended up in Connecticut eventually. Where, when cleaning out my car, I found that pair of pliers on the floor. On each side, they were stamped: "Vise-Grip: The Original". 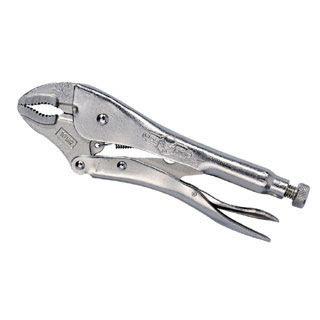 So now I never go anywhere without my "magical pliers", which I like to think my Angel in Nebraska provided for me.
**I was sad to learn (from Wikipedia)  that "On October 31, 2008 the plant was closed and 330 jobs were lost when the manufacturing of Vise-Grips and other tools moved to China.
Posted by Lauren Raine at 11:29 AM

That's too bad about your Grandmother . . . with the dementia, I mean. I was born in North Platte, Nebraska, and raised on a farm/ranch 3 miles outside of Stockville, the county seat of Frontier County. This is just 65 miles south of North Platte. I don't much get along with those folks anymore, I'm waaayyyyy too much of a non-conformist, but here's a little advice. If you're still back east and you head back that way, stop in and say hello to Les and Jan Hosick at the Dancing Leaf Earth Lodge and Cultural Center:

Les is a self-taught archeologist who happens to be rather envied by all of the professional archeologists. He and Jan have an amazing collection of artifacts, including a saber-toothed tiger skeleton. Les uncovered a clay pot filled with native corn and squash seeds several years ago and they maintain a reconstructed earth lodge of the type those native peoples used to live in. They're cool people and Les is an amazing photographer with some photos you have to see to even believe! He has a photo of the interior of the Lodge which is just so crazy mysterious; I bought a copy for my sister for her birthday and she never ever hung it . . . pure ignorance! Anyway, I think you and Les and Jan would probably hit it off splendidly. Most everyone in the community calls Les barefoot boy because he never wears shoes and all of his photos have little pair of bare foot prints in the corner . . .