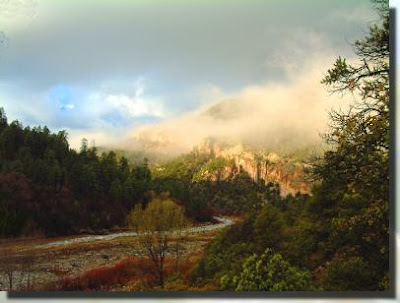 'The Prophetic Heart explores the true frontiers of consciousness, where past, present and future meld seamlessly into activist art, an inclusive pulsing web of which we are both but a single inextricable strand and one of the crucial conscious weavers..... We see that our personal struggles are part of a shamanic process of falling apart and being remade, much as the tumultuous Earth Changes tell the story of a living planet restoring balance through dramatic transformation."

I posed the question, "How do we talk to the Earth? " and immediately thought of Jesse Wolf Hardin, Loba, and Kiva Rose, who have created the Anima Sanctuary in Reserve, N.M.  For many years they've been living off the grid in their magical canyon near the Gila wilderness.  Jesse is a philosopher, writer, teacher and artist, and Loba and Kiva Rose are herbalists and Medicine Women.

The high deserts and hidden canyons of New Mexico, layered with cottonwood trees and rock sites inscribed, like some ancient book,  with petroglyphs, have been famous for attracting artists and spiritual seekers.  It's Spider Woman's Country, the shimmering, transparent strands of her Web seem especially lucid and visible.  There is a particular kind of person I seem to meet there I call the "New Mexico Mystic ".  A couple of years ago I wrote about the ecologist, philosopher and magician David Abram, and Wild Ethics. New Mexico also hosts eco-psychologist Bill Plotkin's Animas Valley Institute.  And the Lama Foundation, with its World Indigenous Peoples Conference.  And the  Cuyamungue Institute, founded by Felicitas Goodman, and Greg Bradon........new Mexico mystics, people who speak with the land. 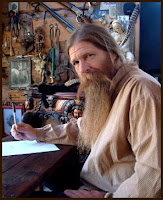 For a long time I've been aware of the Anima Center in Western New Mexico.  I've corresponded with Jesse, and met him and Loba one wonderful summer at Brushwood, where he came to teach at the Starwood Festival, and Loba, who is a fabulous cook, created special feast for the women.  Jesse has been a prolific writer, with hundreds of published articles and 6 books.  He was also a  visual artist who left his life in Taos to become caretaker for the land in the Gila Wilderness he fell in love with, where he later established, with his partners Loba and Kiva  Anima. 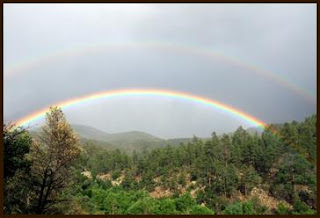 "There at the base (of the cliff)  the impulse is always to look up, and it must have been so even for those first human inhabitants of the canyon trained to seek spirit in the ground as much as the sky. And craning my neck towards the forms and fissures above, through choking tears, came these unexpected words “I promise, no matter what, I’m yours. Even if I end up penniless with no one here to love me....” Then, in almost a scream, “I will never leave you!” And in turn, I accepted the canyon’s assurance that I belong.... and that as lonely as I might be, I would never be alone."

----------------------------
"Contracted: receiving the support of the land and pledging the self in return. There was of course another contract as well, whereby I– then a young man with more attitude than common sense– signed my name on a set of papers that indentured me for fifteen years. As with most or all real estate agreements, it stipulated that if I was more than thirty days late with any of the semiannual payments, the land would automatically revert back to the seller. In order to stay close to the land I’d gone from selling expensive paintings in our gallery in Taos to working minimum wage jobs doing everything from spreading seeds on logged acreage to making adobe bricks, with friendly immigrant workers I could barely understand. My part of the bargain involved doing whatever it took to get up the money for the land payments, and the seller was likewise bound to turn over control of a most special place.
......Nonetheless, the most important contract is not that between two people.... it’s the reciprocal commitment between human and land, made and fulfilled in particular places. As with contracts between individuals or entities, both parties make promises in exchange for specific benefits. For centuries the land has kept its part of the bargain by offering up nourishment, shelter and instruction while we’ve largely defaulted as a species on our reciprocal obligations. We’ve largely failed our task to be the planet’s most sensitive receptors, to temper knowledge with humility and wisdom, or to properly give sacrament to, give thanks for, preserve or celebrate that land we as a species have evolved in contractual partnership with.

With every gift comes a responsibility to its spiritual and physical “care and feeding.” This goes for the soil itself, elemental to all life, and all that grows from its bosom or calls its rocks and trees home. Responsibilities to the plant and animal species we consume, to the water we drink and the air we breathe. The responsibility to insure that which we take is neither diluted nor despoiled, to give back equal to that which we are given. And whether we choose to call it that or not, it includes a responsibility to engage in some form of prayerful communion.
Responsibility: the ability to respond."
From "Selected Writings", Jesse Wolf Hardin

Thank you for posting this Lauren.
I find these people inspiring.
It's really important I think and getting even more so to keep on showing to the world that it is possible to live another way and that there still are people everywhere willing to make the commitment to do so.

You always leave me inspired and eager for more.

Lauren, Your post is thoughtful & deep, Jesse has inspired me for many years with his writings & to find him here - of course, connected with Spiderwoman and you...perfect! Thank you for a great start to my day!

Thanks to all of you, once more. Margaret, I agree with you.....there are many, many people, visionaries like Jesse, Loba and Kiva Rose, who are living the solution - as they would say, "walking the talk". It's so important to keep being inspired by them.