Waters of the World 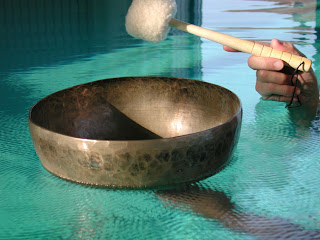 "O fountain mouth, giver, you, mouth, which
speaks inexhaustibly of that one, pure thing,—
you, mask of marble placed before
the water's flowing face..."

from Sonnets to Orpheus
by Rainer Maria Rilke
There is a wonderful ritual  we used to do at Reclaiming's Witchcamp called the "Waters of the World".  We would begin the week long event with a ceremony in which participants brought vials of water, gathered from throughout the world as those gathered were.  Each would empty water into the Chalice, naming the place from which the water came.  I remember the profound sense of gratitude, and the presence of the Holy, as I poured my little vial of water from the beloved Rio Grande into the Chalice. 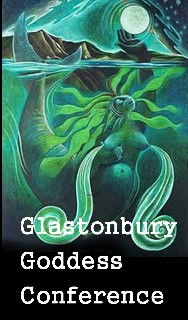 The theme for this year's Glastonbury Goddess Conference is "Celebrating the Great Mother of Water ", and I will return from Glastonbury with a vial of water from the Chalice Well there.......a personal pilgrimage that I've longed to make for many years.

Freddy Silva, a world renowned researcher of crop circles, believes that the concentration of crop circles in the ancient sacred geomantic sites of southern England  is also about shifting or "raising"  the energies of the water tables there, which in turn flow into the ocean, impacting on subtle levels the entire world.

She is our universal Mother, the source and beginning of life.  We grow in Her amniotic waters and are born, we weep and our hearts open, we are "baptized" in Her waters and offered a new life.  And like children, which we really are, we take Her for granted, rarely noticing the great Mother who nourishes us.

When I was a teenager, I used to devour any science fiction I could get my hands on.  A child of the '50's, we grew up with "The Bomb", and a universal mythos of the End of the World at the hands of the inevitable military mind.  I still think "On the Beach", with Gregory Peck and Ava Gardner, is one of the most powerful movies ever made, and I remember well the terrible message Ray Bradbury told with his "Martian Chronicles".

Anyway, there was a story I read (I have no idea who the author was, and would love to find it again) in which "The Bomb" had happened, and an astronaut had the misfortune to be be the last living human being.  He saw it happen while orbiting the Earth, and landed to a desolate and barren world.  He begins to walk, and as he walks he hears voices  talking to him, calling to him.  He sees, through blowing dust,  his wife, his children, his friends, his dog, all just ahead, beckoning  images of everyone he's ever loved, calling to him urgently to hurry, to meet them somewhere in the distance.  At last, about to die from radiation, he finds himself standing on a beach, the waters of the ocean lapping gently against his ankles.  What called to him  was Mother Ocean, and as the story ends our desolate hero sinks, finally at peace,  into the water.  We're left to imagine that She will use his life, and the cells in his body,  to begin again.
Pretty extraordinary story, considering it was written in the 50's, long before Gaia Theory, Women's Spirituality, or even Ecology!

I never forgot that story, although all of the Andre Norton I once read is long, long gone.

I know that I often sound rather apocalyptic, but I don't really feel I am.  I think, in this time of transformation,  we're being given a chance to grow up,  and become co-creators, instead of exploiters, of life.   In the face of so much loss, so much fear, it will be hard to hold that hope.  But I have a deep kind of faith in the adaptability of the human spirit, and beyond, the evolutionary mind of nature, of Gaia.

Holy Mother of Waters, I Praise You!

If the current actions contributing to a multifaceted degradation of the world's oceans aren't curbed, a mass extinction unlike anything human history has ever seen is coming, an expert panel of scientists warns in an alarming new report.  The preliminary report from the International Programme on the State of the Ocean (IPSO) is the result of the first-ever interdisciplinary international workshop examining the combined impact of all of the stressors currently affecting the oceans, including pollution, warming, acidification, overfishing and hypoxia.

According to the report, three major factors have been present in the handful of mass extinctions that have occurred in the past: an increase of both hypoxia (low oxygen) and anoxia (lack of oxygen that creates "dead zones") in the oceans, warming and acidification. The panel warns that the combination of these factors will inevitably cause a mass marine extinction if swift action isn't taken to improve conditions.

The report is the latest of several published in recent months examining the dire conditions of the oceans. A recent World Resources Institute report suggests that all coral reefs could be gone by 2050 if no action is taken to protect them, while a study published earlier this year in BioScience declares oysters as "functionally extinct", their populations decimated by over-harvesting and disease. Just last week scientists forecasted that this year's Gulf "dead zone" will be the largest in history due to increased runoff from the Mississippi River dragging in high levels of nitrates and phosphates from fertilizers.

A recent study in the journal Nature, meanwhile, suggests that not only will the next mass extinction be man-made, but that it is already  underway. Unless humans make significant changes to their behavior, that is.

Great post. I vaguely recall reading that story you mention. I can't recall the title or the author, either. I also read a lot of scifi - well, still do- and so many of those early books made a powerful impact on me.

Wow, someone who remembers it as well! I do wish I could find out who wrote it......such a poignant story.
Thanks Trish!

Lauren - that's a singing bowl in the first pic, right??

Yes........I took the image from an article about a water healing ritual, inspired by the work of Dr. Emoto.