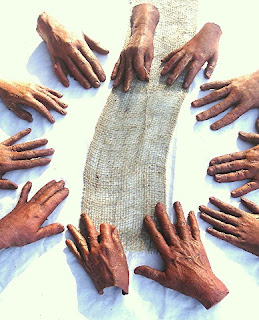 I think it's so easy to fall into despair these days - it's important to not concentrate on fatalism, but to be aware of the many, many "soulutions" that address our environmental, social, and spiritual crisis.  That's what gives energy to hope, and to transformation.  Here's a few journals I subscribe to that I felt like sharing - Solutions Journal, and Earth Portal News, both offering information about green energy and other good news.  I love this article about possible future urban "farms" - imagine picking your own salad as you head for the checkout counter.  Wonder if they'll have cherry tomatoes and bell peppers?


Agropolis: The Future of Urban Agriculture?

Posted on September 16th, 2010
Environmental News Network: Last week at the Nordic Exceptional Trendshop 2010, held in Denmark, one presentation  took urban agriculture to the next level. A collaboration with NASA, you might even say it launched urban agriculture out of this world, and into the future.The idea is called Agropolis, a combination grocery store, restaurant, and farm all in one building, employing the most advanced technologies in hydroponic, aeroponic, and aquaponic farming.

As it stands, Agropolis is still just a mere idea, with little more than some cool graphics to back it up. But regardless, Agropolis ushers forth a new wave of thinking about urban food systems.The team behind the Agropolis concept proposes that this new generation of store would be an ecosystem  unto itself, a finely tuned orchestra of parts in balance, that would not only be totally environmentally sustainably and friendly, but also just plain producing the freshest food around.

But what would all these innovative, NASA-inspired state of the art hydroponics and other high-tech solutions look like in practice? According to the vision of Agropolis, a customer would walk into a store that is covered in green. Vegetables growing on the walls as far as the eye can see. And below the floors one would see tilapia swimming, working in tandem with vegetables in an aquaponic system. You would buy a tomato that was literally just picked, from a plant that you can see in front of you. The store would bring a whole new meaning to local, and one-up the notion of hyper local, since all the food available to eat or buy would have traveled zero miles from the farm to the store. At most, just a few steps.

It all sounds grand, and more than a little space-age. But the challenge given to the team that came up with Agropolis wasn’t entirely outside reality: Create a farm without relying on arable land. As the Earth’s healthy soil and other resources dwindle, it may not be out of the realm of possibility that a system like Agropolis be needed, particularly in urban areas. And while urban agriculture has come a long way, incorporating all kinds of creative and innovative ideas and technologies, in order to make it work on a large and global scale it may be time for something as futuristic and high-tech as Agropolis.
Posted by Lauren Raine at 1:07 PM

A greenhouse a bit like the one in the photo was featured in a botany program on TV last week.

Half of ALL the tomatoes grown in the UK are grown in just ONE greenhouse, like that one. It's built adjacent to a factory, and all the waste carbon dioxide from the factory is pumped into the greenhouse, so achieving 'carbon capture' and at the same time the C02 atmosphere in the greenhouse increases the plant yields.

But as far as I know there are no customers who 'walk round picking their own tomatoes'. It's just like an assembly line. The stuff is all loaded into huge trucks and shipped off to the big supermarkets.

What a fantastic idea! I would be totally blissed to shop in a place where food lines the walls...or grows out of them!

Wow, I would like to see that greenhouse system...........more very good news. Thanks for the info!

I bet the "living restaurant" is just around the corner. No more worry about getting enough enzymes.