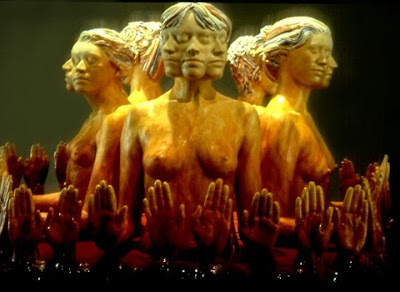 "Originally the Goddess ruled, or co-created, the magical life cycle forces of sexuality, birth, life and death. With the coming of patriarchal religions, the power of life and death became prerogatives of the male God, while sexuality and magic were split off from procreation and motherhood. In this sense, God is one, but the Goddess became two."
Barbara Koltuv, The Book of Lilith


Further reflections on things Liminal - I felt like re-printing a 2001 interview with visionary artist and song writer David Jeffers of San Francisco,  who is also a mystic and scholar of the Kabballah. David lives in the Bay Area, but I'm not going to provide a link, as he requests anonymity because of the personal nature of our conversation.

Lilith, according to some Biblical stories, was created with Adam from the original primordial red clay. Because she would not submit to his authority Lilith was banished from Eden, and fled into the wilderness, becoming a fearsome demon, and partnering with Sammael, a fallen angel. Then God created a second woman, Eve, to be Adam’s companion (in some versions, from a spare rib). All was well until Eve was seduced by a mysterious serpent (often portrayed as Lilith) to eat an apple from the Tree of Knowledge, which she unfortunately also offered to Adam. She was thus doomed to suffer God’s punishment and Adam’s dominion for her disobedience.

And what of Lilith in later patriarchal tradition? Lilith, at home in the night world of her moonlit desert, became “The Great Whore“*, a succubus who flew on black wings to men’s beds, arousing them as they slept, and to the cradles of women to steal away their children. 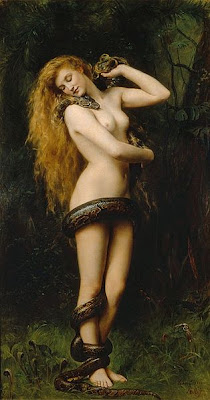 In ancient Sumaria, Lilith was a moon goddess, possibly the night-time version of Inanna. She may have assisted women with night births as a midwife figure. Many suggest that Lilith represents the instinctual force of female Eros: capricious, creative, potent, self-willed. In the language of myth, throughout the course of Western religion, no Goddess was more "scapegoated" than Lilith.

I think Lilith has always been with me. Before I learned that Lilith is often shown with the feet of an owl, my first talisman was a pair of owl’s feet. My brother wanted to teach me to shoot a gun, and when he took a shot an owl fell to the ground. I cut off the owl's feet after it died, and tied them with a black ribbon. I was about 8 years old at the time, and I always carried them with me when my father beat me. I didn't know it, but that was my first talisman.

My first encounter with Lilith as an adult was in bed, in that state of wakefulness just before sleep. Suddenly, an enormous force seemed to come over me. I couldn’t move. Only when I surrendered was it no longer frightening. I remember a terrifying sound, like screaming whistles and grinding stones, deafening. I had this experience for quite some time, finally changing when Lilith came to me in the dream state, when she took on a human form. What was the meaning of that sound? I think it is what we perceive as "sound" when people cross thresholds, interplane abysses. The threshold experience that inspires terror. We misunderstand terror: our ideas of fear fall under superficial notions of duality. Nice things are good, scary things are bad. Terror is, in fact, often the prelude to transformation.

There are times you need to recognize there are powers so much greater than yourself, powers that are undeniably potent. It brings you to your knees. Which means to me Lilith is anti-ego. Lilith is about going beyond our small selves. How can one aspire to contact the divine without recognizing the difference between that vast power, and your own small, limited self? If you believe your understanding or personal power is comparable, you cannot access the influx of divinity. It doesn't work. That's what devotional mysticism is about.

Lilith occurs in the Kabbalist Tree of Knowledge within the mystical traditions of Judaism. There are also medieval paintings in which Lilith is shown perched on a certain branch of the alchemist’s “Tree of Wisdom“. Eventually, the seeker will meet her. When I prayed, "send me one who is divine", it was not a nurturing aspect of the Goddess that came: it was Lilith. I had to be unraveled, I had to be re-woven. She was the appropriate guide for the emotional work I was doing. Lilith was the only deity within those mystical traditions who could help me with my rage, my pain, healing my abuse. I could only go so far in therapy.

I didn't know at first it was Lilith who came to answer my prayers, but when I met her in my dreams, there was no doubt in my mind. She appeared as a disheveled young girl - her clothes were ripped and her hair was matted. In my first dream of Lilith, I took a gardenia from her room. She came screeching after me as a pubescent girl, utterly enraged. “I can keep the flower if I want,” I told her, “because it's my dream." And Lilith told me I was wrong. "All dreams are mine," she said, "because you are in my world. You come here when you are asleep, and you will respect that I am the queen of this dimension."

The key to understanding Lilith is what happened when I realized I was wrong, and said, "I'm sorry". The pain of Lilith is so much about the universal sanctity of human pain. I remember telling my therapist "All I ever really wanted was for my father to say, "I'm sorry", and mean it." Anyone could have said that to me, and it would have been healing and good. This is the same feeling I had in my dream. Apologizing changed how Lilith dealt with me. She received something she needed, and our relationship could become "Well, maybe we can work something out." She was willing to bargain, which is very Middle Eastern. You are expected to negotiate.

I asked Lilith if I could pay for the flower with a five-dollar bill. She said she would give me change, and put five ancient coins into my hand. Each was worth a fortune, worth so much more than what I offered to pay! She gave me a gift of immeasurable value, and then those gold coins melted in my hand, to become absorbed into my bloodstream, my being. “Now,” Lilith told me, “we can speak the same language; we can communicate with each other.” And that was the beginning of a dream relationship that lasted for over 10 years.

Lilith, to me, is the most intelligent archetypal power. She rules the liminal landscape between the subconscious and the conscious mind, and can help make that information conscious and usable in your life. Lilith is the bridge. She is about the origin of the soul. In medieval art, Lilith is often shown as the serpent in the tree of knowledge, which is considered evil in fundamental religions. But why did she want to make Eve wise? Because it is good for your eyes to be opened. That's all Lilith offered Eve.

"What you believe" is just a shell. Lilith is about breaking the shell. Sometimes you have to fall apart to be put back together, because that's the only way to be re-integrated. You cannot veneer Lilith’s teachings on top of who you think you are. She’ll change you first.”

----------
*"Whore" possibly derives from an ancient Semitic word, "Hara" or "Hora". It's original meaning may go back as far as Babylonia and Sumaria, when women served as priestesses, thus, it was related to a title for a fertility priestess. To this day, "Hara" is an esoteric term used for the womb or 2nd Chakra center, the center of creativity and sexuality. And a circle "fertility" dance, the "Hora", is still danced at Jewish weddings. 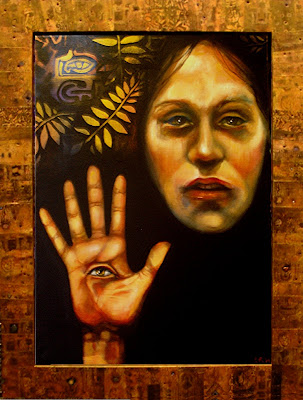 Awesome post. In astrology, Lilith is similar to what is described here.

It is so relevant that you post of Lilith now. As I said before, I studied Lilith at the New Year as I began the journey to find and surface my 'authentic self.'
The other night after a Full Moon Ritual, I was reviewing my dream journal and noticed three themes or dreams I have had more than two of recently. 1) out without makeup, trying to get back home to put some on and running into many obstacles. 2) can't find my clothes/costume. 3)someone's waiting for me and I can't get the glass door locked so I can go with them. They leave me. Individually, these didn't make such an impact, as themes they stood out.
I was wondering are the dreams my ego's desparate attempt to keep my authentic self covered/locked up so ego can maintain control? Also, are these 'illuminations' because of Full Moon energy.

My friend said this past, "Full Blue Moon,' was the second of five in a row that are all about recognizing our 'inherent self.' Also, these moons allow for accessing greater realities on the personal and many other levels.

It seems you are naturally in tune with this releasing energy. Blessed Be!!! Gail

Lauren thank you for visiting my blog. Dont comment here often because speaking meaningful english is difficult for me. Today Lilith gave me courage. I'm making a bandana for my sister who has been operated on a braintumor. I hope those stitches on viola dyed silk, together with the full moon are going to be as healing as you said.
I love your blog.................
XXXm

Thanks for your thoughtful comments!

Lilith is so fascinating to me - I have been thinking I would like to explore some story pieces around this idea in the future.

Thanks for thoughts about dreams, and the recent full moon, Gail - 5, you say? This past one was a real humdinger for me, emotionally, shook everything up! But I agree; entering the realm of Lilith, is to enter the realm of dream, to encounter authentic selves that are not often comfortable.

Martine, I love your work with the healing stitches. I send good wishes for your sister's recovery.

On Thanksgiving day, our dear friend of 40 years, confided to my husband that he was so 'messed up' and never married because of the beatings he received from his father as a child.
This man also suffers from severe, stomach 'blockages.'
As I said before I've been studying Barbare Koltuv's book on Lilith and had just read your interview with David J.
Can I use this information to help my friend?
I'm having my friend read the article and making a Lilith candle for him. I'll ask him to light it and ask Her to personally guide him through the rage towards release.
I know before, he wouldn't have considered something like this but I'm betting that the moon energies might just loosen him up. Gail

This is awesome. I've always been connected to Lilith. Ive traveled through many dreams.