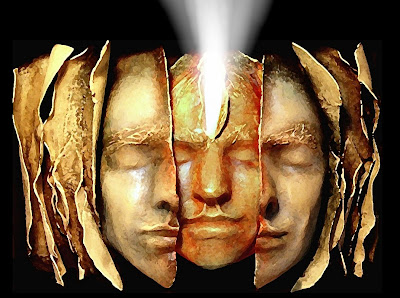 'So here, we see hope. We see that Alzheimer's is neither a decline nor a reduction of the person, but an opportunity to move into the higher plane; an opportunity for self-discovery, the self-discovery and self-transcendence we must all accomplish, in our own journey of ascension."

This entry is no doubt going to meander. Increasingly, I find myself observing what I call the "non-local" or integral nature of "mind". (Boy, does that sound pretentious, but I can't come up with anything more elegant at the moment.)

For example, yesterday I pulled out a folder of prints from a show I had at a friend's gallery 5 years ago. I haven't spoken with him since, but looking at the prints I found myself thinking fondly of him, remembering many good conversations. Later in the day, Lewis called. He said he found himself thinking about me, and on an impulse picked up the phone. So we talked about what we've both been doing in the past 5 years...........and I put down the phone once again reflecting that we are, indeed, telepathic beings.

Lewis, like myself, is dealing with the care of elderly parents. I spent most of my adolescent years as caretaker for my grandmother, who developed dementia. Lewis is trying to cope with his mother who has Alzheimer's. It is profoundly stressful, profoundly painful, to deal with not only the physical, but the gradual cognitive loss of a loved one. To see that person we recognize gradually slip away from identity, memory, this world.

I left our conversation with the name of a book I thought he might want to read by a psychologist who believes that understanding Alzheimer's is about understanding the nature of our multi-dimensional being. And there was also a story I felt like sharing, a story about my grandmother, but I think I'll leave that until my next blog entry.

The book (It is very much in the form of a journal, and many passages have a kind of "stream of consciousness" form) is written by the founder of ISSEEM, Elmer Green, who is also one of the founders of Biofeedback. Dr. Green agreed with his wife and life-long collaborator, Alyce, to study the progression of her disease from a spiritual perspective. 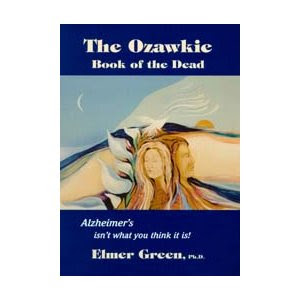 The Ozawkie Book of the Dead - Alzheimer's isn't what you think it is! *
Here's an excellent excerpt from a review by T.M. Srinivasan:
"The book under review is by 'the father of clinical biofeedback' in this country and co-founder of the Council Grove Conference for the study of Voluntary Control of States of Consciousness, the Association for Applied Psychophysiology and Biofeedback, and lately, the International Society for the Study of Subtle Energies and Energy Medicine. His long time associate and wife, Alyce Green had Alzheimer's for the last seven years of her life. Elmer tended to her during these years and "explored the realms of consciousness beyond Alzheimer's and death."

Part 2 of the book deals with their experiences as Alyce slipped into her own world initiated by Alzheimer's. Alyce, during times of profound lucidity, was able to communicate an experience of dual consciousness, of being both "here and there". She was in "two bardos" (to use a word from Tibetan Buddhism), moving from the present to the other which was beyond death as she progressed with Alzheimer's. For example, she tells Elmer in one passage, with much sadness, about the "big goodbye that is shortly coming up" (knowing about the present) and then says "they had taken her to see the great temple" (aware of the beyond). [p. 423]

Elmer kept a diary from May 8, 1989 till after Alyce passed away on August 6, 1994. The widely swinging moods, the sudden show of affection towards Elmer, the awareness of events at several levels all makes this part very informative and touching.

The last part is titled "Learning to enter the Yogic states of deep stillness". This part deals with karma and how to get over its entanglements, Theta Brainwave Training, channeling, and stories about dreams experienced by Elmer and several others, who received instructions and support from Alyce. In a series of three synchronicities, Elmer meets his school friend and sweetheart, Gladys Strom. All these synchronicities are arranged by Alyce, who wants a companion for Elmer during his travels and lectures.

The book also contains information from an earlier book by the author that dealt primarily with biofeedback [Elmer and Alyce Green, "Beyond Biofeedback", Knoll Publishing Company, Fort Wayne, IN, 1989]. "

My mother had Alzheimer's. It was the most heartbreaking process to watch and be a part of. But I think this disease, perhaps like all diseases, has a deeply spiritual component. My mother was afraid of death. With Alzheimer's, as her consciousness became less focused here - she was able to become aware of there. There were many times when we visited her that she said her mother (dead since 1969) had stopped. I believe Alzheimer's enabled her to commune with the dead and to lose her fear of death.

Fascinating.... I've always suspected something like this with Alzheimer's.

It is very good indeed to hear others speak of this, feel they perceived the same thing. Although I was just a teenager, I remember,toward the end, feeling that my grandmother really wasn't "here" any longer, although being so young I didn't have a way to understand what I sensed.