A Spider Woman Story (not my own) 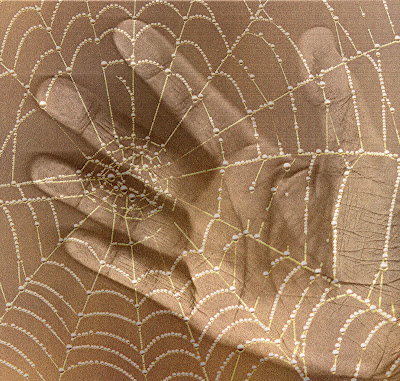 Danica Connors is a lovely woman I met while cooking in the community kitchen at Brushwood Folklore Center the summer of 2008. Brushwood is a place that hosts many summer festivals, including Sirius Rising and the former Starwood Festival. Danica was there to teach a class on herbs and flower essences - she is also a professional singer and actress living in Rhode Island.

I told her I was writing a book about the Legend of Spider Woman. When she told me the story below, I knew I was in the presence of another Spider Woman. I've met quite a few, and am pleased indeed to know they're around, helping with the weaving. So I felt like sharing her story, which I transcribed from a tape, below.

"As a child I’ve always liked spiders. I would find them in the corners of my room and say “goodnight” to them. I think the spider motif has always followed me, because the very first role I played was as Charlotte in “Charlotte’s Web”! I think Spider Woman has always been a part of my life, my friend and guide.

The most visionary experience I had occurred on my 25th birthday. At the time, I was finding it very difficult to end a relationship that had become destructive. I had a dream that I was in the house I spent my childhood summers in. In my dream, I was chasing a spider, but it was always out of my reach.

I crawled under beds, over tables….and finally the spider ran underneath the sink in the kitchen. I peeked beneath the sink, and there I saw a gorgeous web - a beautiful, illuminated web hidden away underneath, with a spider right in the middle of it! I looked closer, and I could see that different parts of the web held different experiences of my life, suspended on the web. As I watched, a strand broke off. It floated into the room and then it turned into the man I was breaking up with. I heard a woman’s voice speak then; she told me why our relationship was over, and why it needed to end.

Then my former lover walked out of the door and out of my life (in the dream). I understood that I was supposed to go back to touch the web where it had broken off. I realized I was now free to make a choice now about where to go next……and as soon as I touched the web, I woke up!

To me, this dream experience was a kind of soul release, and a birthday blessing as well. It also felt like so much more, as if Spider Woman was teaching me something about how continuity works. It was a reminder to me that the Web is under everything. I had to look under tables, under beds, and finally under the sink before I could find her.

Spider Woman always seems to come at pivotal points in my life. If she shows up with a dream or a synchronicity, I know it’s time to pay attention because something significant is going on. With that said, I have another story to tell about Her.

My husband and I moved into our apartment this past Yule. I found several beautiful spiders there and, as I always do, I welcomed them into our home. Not long afterwards, I was at the stove making cinnamon apples, and I turned around to reach for some fresh cardamom. As soon as I did, I heard what sounded like a shotgun going off! I had mistakenly turned the heat on beneath a Pyrex pot that held the apples. It shattered everywhere – except in a semi-circle close to me. My face was inches from the pot when I turned around. I was absolutely terrified with shock – and then I saw a spider, walking right across that little cleared area.

Just as loud as day, I heard a voice say: “I keep you, you keep me.” At that I burst into tears with gratitude."

Fantastic story! What a perfect synchro, too.

You know, ever since I began following Spider Woman's "threads", I've met a lot of Spider Women - people who, like myself, are guided by this mysterious mythic being throughout their lives.

I've been feeling lately like it's time to "tell the stories", not just the Spider Woman stories, but all stories that I have. I think the world needs all of our healing, transformative stories now...............thanks to both of you for being story tellers also!

I read another story recently about a garden spider who begins a new web each day after She severs the ties of the old one and it floats away in the wind.
Could this be the greatest Wisdom/Medicine of all? To begin anew each day, never looking back.

I'm anxious to read all your stories. Blessed Be!!! Gail