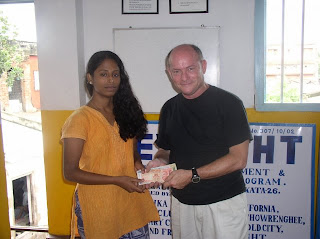 Last night I  heard a speech by Bill Moyers, in which he made a profound argument for resisting the manipulation of the media, so much of which is controlled by corporate interests and fear-based propaganda.  So, since the "Season of Giving" can sometimes feel more like the "Season of Gimme",  I felt like writing about a few  "Heroes" - people who are quietly living lives of amazing generosity every day. It's been my privilege to meet a few "quiet heroes" personally, and I want to encourage any who may be interested to read about (or support if you can)  their projects.   The truth is, people like this are all over the place, doing kind, transformative, generous work.    This is the kind of news we need to hear  a whole lot more of. 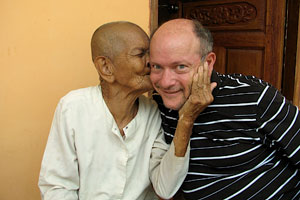 First,  Marc Gold and the 100 Friends Project.  I met Marc when he came to Tucson for a fundraiser ...he is a retired teacher from California, who now devotes all of his time to raising money and travelling around he world to distribute it where he finds it is needed.  Here's what one of the original "100" has to say:


"My good friend Marc Gold has built one of the most captivating projects (and one of the most interesting lives) that I know of. While traveling in the Himalayas in 1989, Marc (probably) saved the life of a destitute woman by pulling a few dollars from his pocket to fund her emergency medical care. Struck by Actually Experiencing the huge difference that small sums of western money can make in so much of the world, Marc, before his next trip to Asia, wrote a letter to one hundred of his friends. He told them the story of the destitute woman, told them that on his upcoming trip he was going to share more of his money with other impoverished individuals, and promised that if any of his friends would like Marc to give away some of their money too, he would gladly do that -- and report back on the whole adventure. Marc guessed his friends and family might send $300-$400, but they sent over $2,000.

From that beginning Marc has spent the past two decades building The 100 Friends Project. His current goal is to distribute, person-to-person, a total of $1 million (I joke to Marc, a 59-year old teacher who has lived "paycheck-to-paycheck" his entire life, that his goal is to become a "reverse millionaire"), and it seems that he is well on his way." (http://www.100friends.org/)

I met Dana Dakin when I taught a "Masks of the Goddess" class at Kripalu in 2008, and sat open mouthed while she shared her story over dinner.  Inspired by Olga Murrey's work, she decided she would start a micro-lending program to help impoverished women when she turned 60.  She put her intention out into the universe, and was led on an amazing adventure that became Women's Trust of Ghana;  now a model program that recently won the prestigious Purpose Prize Award.  Here's a little bit of her story.....


"In the 1980s,  I met a woman named Olga Murray celebrating her sixtieth birthday. To mark the occasion, she was heading off to Nepal to start an orphanage. Her vision, courage, and determination left an indelible mark on me. In 2003, the orphanage and Olga were still going strong and I turned sixty.

Based on the adage that life is lived in thirds, the first third you learn, the second third you earn, and the final third you return, and with Olga as a role model, I decided to greet the youth of old age with my own way to give back. I also knew that whatever I did it had to benefit women and girls. This was reinforced by the information I repeatedly uncovered that all social indicators are positively impacted when you help women to help themselves; their families and their communities are the beneficiaries. The next step was to decide where to begin a microfinance program.

I had a personal trainer Tetteh, a delightful young Ghanaian man, whose father lived in Ghana. My  reading  indicated that Ghana was a relatively safe place to travel with English being the language of the government. These were very important criteria. Being a woman planning to travel alone and not being much of a linguist, I began to talk to people I knew about my idea of going to Ghana to find a village where I could start a microfinance program. I contacted my alma mater Scripps College to speak to a professor who had been featured in an article in the alumni magazine about her research on Mami Waters, a West African goddess. All were helpful and moved me to another contact. Making the plane reservation was the hardest part.

On March 2003, with my stomach in knots, I boarded my flight for Accra. The following day I explored Accra, got my feet under me somewhat, and wondered in my jetlagged state what I would do next. My feeling all along was that the village I would adopt would be in the northern part of Ghana where the poverty was particularly acute.

I received a call from the front desk that there were two gentlemen to see me. Passing through the lobby I noticed two men – one elderly in a flowered shirt, pants, and sandals, and the other in a long white caftan, bearded and barefoot, and carrying a staff. “Well,” I thought, “that’s not them.” And, of course, it was “them”. The older man was Tetteh’s father, and his companion was a fetish priest from a village just north of Accra. They were to bring me to Pokuase village where they had located a room in an inn run by the only white person in the village. Checking out of the hotel, with suitcases in tow, I got into their car and away we went."(http://www.womenstrust.org/content/dana's-story-founding-womens-trust-inc) 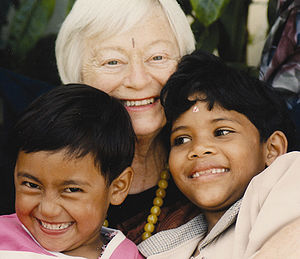 And here's the story of the woman who inspired Dana, leaving for Nepal to start an orphanage at the age of 60.  As I subscribe to the Foundation, in her 80's now, Olga is, indeed, still going strong.

Olga Murray had fallen hard for Nepal – so hard, in fact, that she slipped and fell on a trek in the Himalayas. Carried for days in a basket on the shoulders of a Nepalese porter back to Kathmandu, she consulted a young Nepali orthopedic surgeon who had just opened a small hospital for children.  Day after day, she saw kids with the most terrible disabilities being brought to the hospital, often carried for days down mountain trails, accompanied by dazed relatives, many of whom had never been out of their villages and had never seen a car or electric lights.

Some of these children were abandoned at the hospital by families too poor to feed a child who couldn't contribute to their survival. Others were so badly disabled that they couldn't get to school over the mountain trails when they returned to their villages. Still others had intolerable home situations.

With friends, Olga began giving scholarships to some of these kids.
The Nepal Youth Foundation was formed in 1990. Two years later, Olga Murray retired from the practice of law after 37 years, and  began to devote all her time to the welfare of Nepali children. (http://www.nepalyouthfoundation.org/aboutnyf/olgamurraystory1.html 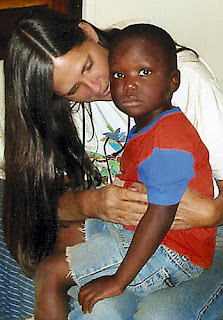 And last, a local Heroine, Kathe Padilla, who I met while she sat with her very modest brochures at a card table at the 4th Avenue Arts Faire.  Kathy spends part of her time in Tucson, and part of her time in Zambia at the orphanage and school she helped found near Lusaka.  In Zambia, a recent census shows that as much as 60% of the population may be under 20 years of age.    Her story is simple;  she learned that there were as many as 10,000 orphaned street children in Lusaka, and being a mother herself, decided she just couldn't stand it.  She went to Africa to learn what she could do.


"In 1999, Kathe Padilla flew to Zambia to see how she could help the growing number of orphaned children living on the streets of Lusaka. With a group of concerned Zambian professionals, she organized the first Board of Directors of what came to be the Chishawasha Children’s Home of Zambia(CCHZ)."   http://www.zambianchildrensfund.org/about.html

You continue to amaze me with your depth of feeling and knowledge. Thankyou. Gail

Thanks Gail...........I have often wished I could go accompany Marc on his travels, or go to Ghana to work at the village. WEll, who knows, maybe someday!