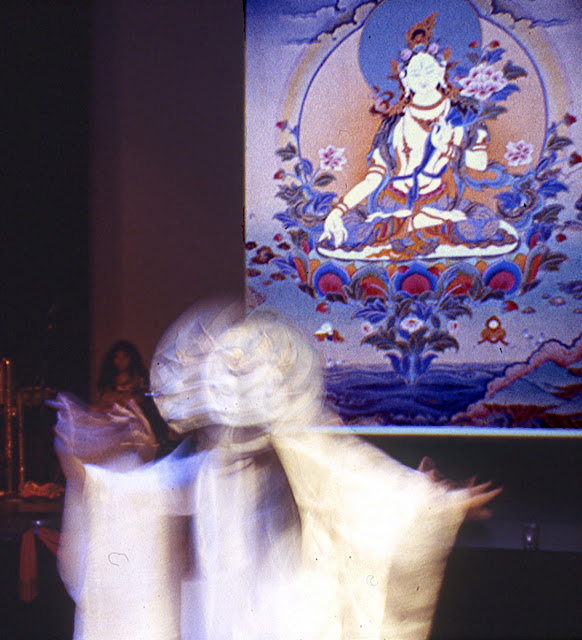 Om Tare, Tu Tare,
even in the darkest prisons, you offer your hand
Your touch cools hatred and grief.
From you, the demons of delusion fly
Praise Tara, whose fingers adorn her heart
Light radiates from a wheel in Your hand.

Valerianna mentioned Jewell in her recent comment, which is magical, as I had just written this entry which talks about energy work Jewell facilitated.   I've been reading "Journey of Souls" by Michael Newton recently, and I felt like sharing a very important vision I had in 1997, a vision that became the inspiration for all the masks I made dedicated to the Goddess Tara.  It was a profound gift.

In 1997 I was finally divorced, and all ties were severed between us.  The ending of the marriage did not bring out the best in either of us, and I felt a great deal of remorse, emotional confusion, and grief.  In my effort at growth that summer, I went to a well known energy healer in Massachusetts,  Jewell.  She put me on her table, and I went almost immediately into a trance state.

I found myself watching what seemed like a "clip"  from a movie - each scene was rapidly replaced by another scene.  I still remember some of these "vignettes" vividly - a ceremonial room decorated with thousands of orange marigolds;  an emaciated old black woman lying on a dirty bed;  a heavyset white man with glasses, bundled up in a kind of fur parka;  African drummers, drumming with passiona around a fire, and more.  Gradually,  I felt myself "pulled back", so that I seemed to be watching these scenes from a greater distance, as if they formed a patch-work quilt.  I remember thinking how incredibly beautiful it all was from that perspective, a work of art.

Then I became aware of an immense energy - a being that radiated (there's no other way to describe it) tremendous compassion.   She had no form, just white light.  The only thing that seemed identifiable was that I felt the Being was female;  and I felt she was communicating something like "Don't take on so, Lauren, look at all of this.  You'll meet again.  You can move on now."  I might add that she also radiated an equally huge sense of humor;  I felt  like a child getting a hug from an angel.  If that makes any sense........ 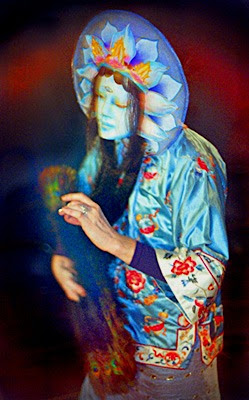 And then I came to on Jewell's table.  After we spoke, I learned that Jewell often began her sessions with a prayer from the 21 Praises to Tara, a Tibetan prayer to the Goddess Tara.  To me, that visitation was White Tara, Goddess of Compassion, manifesting to help me move forward to a new stage of life.  I've revered her ever since. 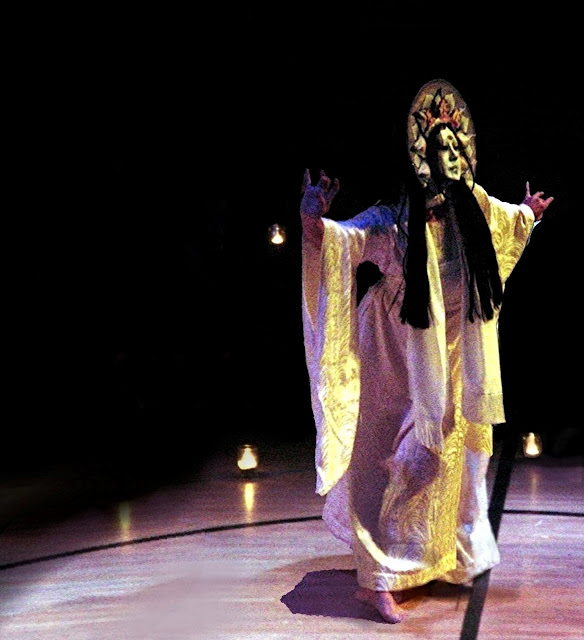 Just this morning I had an insight while communicating with someone about visits from guides. I realized that we each create the atmosphere in which these communications take place. My guides also have a sense of humor and actually tease me. When I thought about it, because that is the relationship I enjoy with my husband, children and students, I realized that this is what I'm most comfortable with in 'real' life so that is how they approach me in my spiritual life. It is certainly exciting to experience all the new questions and insights this journey and the magickal people I have met inspire. Blessed Be to White Tara and to You! Gail

It's remarkable that your mask art was birthed in this way. Very cool story, Lauren.