"Compost" and the Black Madonna 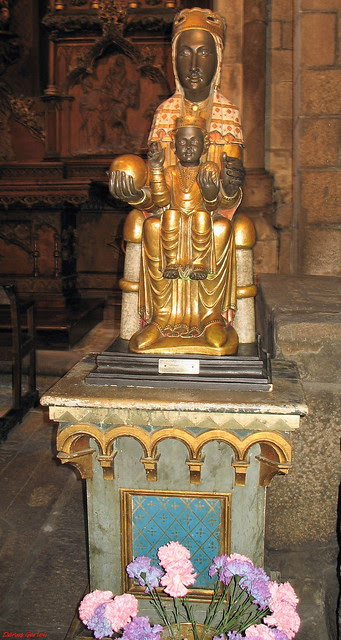 I've always loved the idea of "compost". When I became a gardener, I was delighted by the daily visit to the compost heap, the alchemical magic of watching it gradually become fertile soil, coveted by renegade watermelon seeds that sprouted at it's outskirts, and mice that nibbled at it's warm, smelly, decomposing wealth.

I ran across the idea of "energetic compost" today in a recent article by Sig Lonegren, a spiritualist minister and geomancer who lives in England. I myself have seen "fairy rings" that marked places of geomantic energy when I lived in the Northeast.........I love his description of how he turned to Mother Earth to help him with "psychic compost". Reading his thoughts about "compost", I had to pull out and re-read one of my own articles as well, about the "Black Madonna" - to me, these ideas are intimately intertwined.

"I would like to suggest an approach that employs some geomantic magic (for dealing with fear and negativity). Crossings of underground veins of primary water are very yin. I see them like a psychic vacuum cleaner that sucks energy into the Earth. It helps things to fall apart, to decompose. Yes, there are some beneficial things that can happen by spending time over places like this. For example, it's a great place to put your compost pile. But mostly, it is deleterious to human health. It shrinks your aura when you spend time over such places, and helps you get a number of different degenerative dis-eases - like cancer, arthritis, auto-immune diseases and difficulty in sleeping.

But these yin centres are great places to get rid of stuff that is no longer useful to you. I learned this in the early eighties when another geomancer moved in to my area and began writing me rather provocative unpleasant letters. One day, I had had enough, so I took his letter to a place on my lawn where there was a crossing of veins of primary water, and Mother Nature had made it clear by leaving a small circle of English Daisies. As I lit the letter, I asked Her to take this negativity and use it as compost for the new. I just didn't want this negative energy in my life any more. (He never wrote again.) Six months later, someone asked me about this guy and what had been irritating me, and I couldn't remember! I still can't." 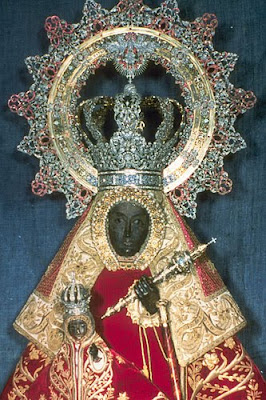 "Older yet, and Lovelier Far, this Mystery
and I will not forget."
Robin Williamson
"Black Madonnas" are found in shrines, churches and cathedrals all over Europe - France alone has over 300. These icons have been the focus of millions of pilgrimages since the early days of the church, and probably rest upon sites that were pilgrimage sites long before the advent of Christianity.

Why were these effigies so beloved that pilgrims travelled many miles to seek healing and guidance? Why, in a European medieval world where peasants or even aristocracy were unlikely to see a dark skinned person was the Madonna black? Some of the effigy statues are made of materials that are true, ebony black. And why are there so many myths that connect the effigies with trees, or caves, or special wells?

In 2005, during a residency on the 150 acres of IPark, the land spoke to me, and I had time and space to speak back, to engage in a conversation, and my own " Black Madonna" arose from that numinous time.

Many suggest that the Madonna with Child originated in images of Isis with her child Horus (the reborn Sun God). Isis was a significant religious figure in the later days of Rome, and continued to be worshipped in the early days of Christianity. In general, when Isis arrived in Rome she adopted Roman dress and complexion, and was sometimes merged with other deities, such as Venus. The images of Isis that survived the fall of Rome were perhaps the origin of later "Virgin and Child" icons - temples devoted to Isis continued well into the third century. "Paris" derives from the name of Isis ("par Isis") 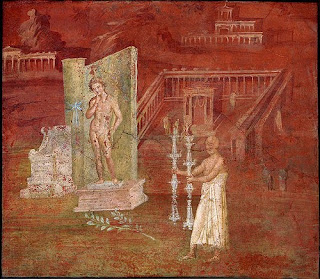 fresco from the Temple of Isis at Pompeii
Mother Earth

Whether originally derived from Isis or not, most of these images are connected in place and myth to healing springs, power sites, and holy caves. I believe The Black Madonna is also the ancient Earth Mother, metamorphosed in the form of Mary, and yet not entirely disguised. She is black like the Earth is black, fertile (often shown pregnant) like the Earth is fertile, dark because she is embodied and immanent, as nature is embodied and immanent.

I did not realize until recently that there are many pilgrimages in Europe to Black Madonnas. A significant pilgrimage route is the one that concludes at the Cathedral of Santiago at Compostella, the endpoint of "The Camino", the long traditional pilgrimage still made by thousands today across Spain.

It's believed that the earliest pilgrimages were made to the "Black Madonna of Compostella", a very ancient effigy. Compostella comes from the same root word as "compost". Compost is the fertile soil created from rotting organic matter, the "Black Matter". The alchemical soup to which everything living returns, and is continually resurrected by the processes of nature into new life, new form. Matter. Mater. Mother.

"From this compost -- life and light will emerge. When the pilgrims came to the Cathedral at Compostella they were being 'composted' in a sense. After emergence from the dark confines of the cathedral and the spirit -- they were ready to flower, they were ready to return home with their spirits lightened."

There are many legends and miracles associated with Black Madonna icons. The icon at Guadalupe, Spain, is said to have been carved by St. Luke in Jerusalem, although this is highly unlikely. It doesn't ultimately matter how old the icon actually is. The question is, what does it embody that strikes a deep chord, that speaks to those who come to contemplate the icon? And what does the icon emanate? Can it actually have healing powers, or is the site itself a "place of power", it's energies renewed by millenia of worship and pilgrimage? What resonance does it attune those who come there to? And how significant is the act of making the pilgrimage itself, the long effort to come to a sacred place, a sacred image?

In the Middle Ages when the majority of the Black Madonna statues were created there was still a strong undercurrent and mingling of the old ways. Black Madonnas were discovered hidden in trees in France as late as the seventeenth century, suggesting these were representations of pagan goddesses who were still worshipped in groves. Black Madonnas are also found close to caves (the womb/tomb of the Earth Mother). In churches the statues were sometimes kept in a subterranean part of a church, or near a sacred spring or well.

"Again and again a statue is found in a forest or a bush or discovered when ploughing animals refuse to pass a certain spot. The statue is taken to the parish church, only to return miraculously by night to her own place, where a chapel is then built in her honour. Almost invariably associated with natural phenomena, especially healing waters or striking geographical features" Ean Begg

Black Madonnas, not surprisingly, are also associated with the Grail legends. The Grail or Chalice may represent the mingling of Celtic mythology. Cerridwen's cauldron was an important myth about the womb of the Earth Mother, from which life is continually renewed, nourished, born, composted, and reborn.
The extent to which people make pilgrimages to these sites is amazing. For example, the Black Madonna of Montserrat, near Barcelona, receives up to a million pilgrims a year, travelling to visit the 'miracle-working' statue known as La Moreneta, the dark little one.

So why am I writing all of this? Well, because it's important to know that the ancient "Journey to the Earth Mother", which exists in all cultures and times, intimately connected to long ago "pagan" sacred sites, sacred sites that probably always had an intrinsic geomantic power.... never ended. It just transformed again. The pilgrimage is a human pilgrimage, an impulse that is made, ultimately, throughout many cultures and times. 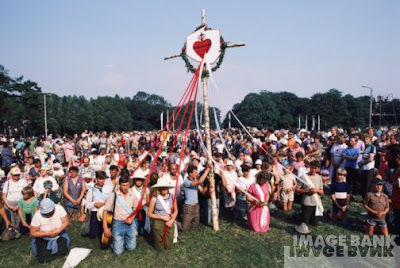 Procession to the Black Madonna, Poland

Miraculous Images of Our Lady (1993) by Joan Carroll Cruz;

The Virgin Goddess: Studies in the Pagan and Christian Roots of Mariology (1993) by Stephen Benko.

Interesting post! My husband is Swiss and I have traveled often to Switzerland to visit extended family. I have visited Einsiedeln, which is home to a 15th century monastery and the figure of a Black Madonna. Surrounded by the Alps, the monastery is truly impressive. I find it fascinating as to the many stories and beliefs The Madonna inspires. I wonder the truth about its symbolism. Your post gave very interesting food for thought. I think it is definitely linked to a forgotten worship and honor of the sacred feminine, be it Mother Earth or the yang. An interesting book to read which speaks directly about this is "The Woman with the Alabaster Jar", by Margaret Starbird. This is more in line with the Grail theories though, but very interesting never the less.

Terrific post. Perhaps the black madonna symbolizes, among other things, the anima, the collective female yin energy, the soul.

Thanks for your comments! I will have to look up the book you mention, Cole; the Grail legend is not unrelated, as many suggest that symbolically the Grail represents the "womb" of the ancient Goddess, from which all life proceeds. One finds this idea in the Celtic "Cerridwen's cauldron" as well. For an exhaustive look at this, I often return to Riane Eisler's "The Chalice and the Blade" (1989).

Trish and Rob - the "Black Madonna" may be very much about the Anima. There has been much interest in the "dark Goddess" archetype; many believe that the long repression/denial of the divine feminine, the "Anima Mundi", World Soul, represents a fundamental imbalance in the psyche of humanity that is now urgently in need of healing.

I just returned from a weekend away. So much am I into composting at home that I felt guilty putting my 'compost' material in the trash at the condo we were staying in. I always check to see what gift you have sent first thing upon my return home and found this article. I have visited Montserrat and other Black Madonna Shrines in Europe, but, have never read a more informative or lyrically beautiful essay tying all these varied concepts together. Thank you for your insight. Blessed Be!!! Gail