The Chronicles of Shane 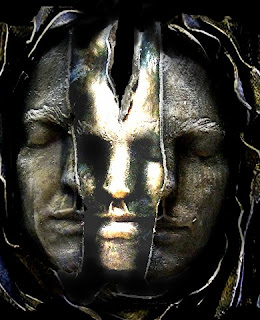 For a month now, I've kept a card on my altar that a mechanic gave me when I took my car in for an oil change recently.  Below the Ford logo, it says "Shane Crist, Service Advisor".*

I doubt this would represent a sacred relic to anyone except me, least of all the young man who has the misfortune to be named after a  word for God.  But my altar is full of objects I consider  "comments" from the "Big Conversation",  which, it seems to me, is a highly  subjective business.  This card is like a Yin/Yang symbol to me, a little synchronistic nudge from the Universe to keep on working on the interior no matter chaotic the exterior life seems, to keep on becoming whole.

"Crist" represents to me the Light, the  Christ consciousness or illuminated consciousness - "enlightenment".  "Shane" represents (to me) that which is unconscious, "below", yin,  yet also part of my whole being  - "endarkenment".

As above, so below. Some people get gold statues of the Madonna for their altars, or an angel drops them a feather.  I get cards from car dealerships.  Relics happen.

I wanted to write about a dream I've been working with since December of 2009,  because, to me, it demonstrates the gift of dreams, and how synchronicities can inform us within the same sphere - I've come to call my process with it "The Chronicles of Shane".

In 2009 I had a lucid dream, and since I rarely dream, when I do,  I feel my unconscious is throwing a brick at me and I should  pay attention.  I work with dreams in Jungian terms, and thus  it's like unpeeling an onion with many skins of meaning to find a gem at the core.  This particular dream is so clearly about what Jung called the "shadow" and the "Anima/Animus" it's classic.


My dream began on a high, steep mountain road that afforded a great view of the ocean.  It seemed there were different levels of tunnels or chutes I had to go down, each time preceded by a woman who seemed very familiar.  I was frightened, but I couldn't go back.  Watching the woman go before me was somehow reassuring.  In the first tunnel I was in my car, driving straight down an impossibly steep road, and at the bottom I found myself on a ledge.  I parked my car, realizing I had to leave it there, and followed the woman to another "chute".  She jumped in and I watched her disappear.  So I closed my eyes and jumped in after her.........and found myself standing on a high ledge with a magnificent view of the blue ocean very far below.  I stood before a narrow trail head, and again observed the strange woman disappearing around the bend ahead of me.  Once again I didn't know what to do.

Then I heard numerous voices speaking to me - they were all calling me "Shane".  I couldn't understand why they were calling me this name.......until I looked down at my feet, and  realized that I was "Shane"........I was a man called Shane!  How strange!  And with that realization,  I was able to put my knapsack on my back, grab my walking stick, and began walking down the trail.  Then I woke up. 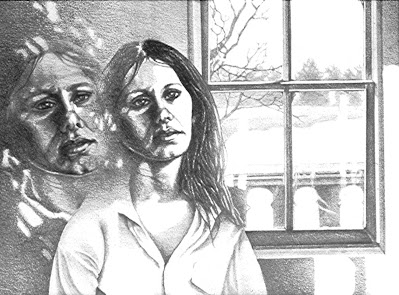 Jung believed all dreams are personally helpful.  I agree, although I also believe there are dreams that are precognitive, as well as dreams that may represent spirit contact.  This dream was, as dreams are, multi-dimensional, and I've broken it down into different components, all of which are mutually related.


"The Animus as positive energy represents empowerment, the capacity to engage in and fight for what one wants, and the assertion of the life force.  Positive Animus energy is seldom given - it is achieved."

First Dimension of the Dream - "The Animus":

I believe the woman going ahead of me is myself, my identity as a woman.  I had a domineering, tyrannical father, and a mother whose needs were never taken into consideration.   My first observation was that in "becoming a man" at the trail head, I was being urged to look at the need for healing (integrating is a better word) the "animus" aspect of  myself.  The road ahead, unknown as it may be, must be, and is, now empowered by  the "male" self that I have previously projected outside of myself, or  rejected as negative or corrupt.  I can no longer "give my power away" as I go forward.   Whether this happens at 30 or 80, I believe this is a significant passage women  must go through, just as men seek, at certain points in their lives, the disenfranchised, hidden or unknown "feminine" aspects of their soul life.

Second Dimension of the Dream - "Shadow":


"Shane" sounds like "Shame", and one dimension of shadow work is dealing with unconscious, toxic shame.  To experience emotional  regret at the ways one has hurt others, or stepped outside of integrity, or made bad choices,  is a gift - because one can then consciously change,  make amends, and become a wiser, more mature human being.  Shame, however,  is a suffocating, toxic emotion that usually has nothing to do with anything real, and clouds any ability to act with clarity.  It's something imprinted on a child by society and family, and in order to emerge as a self-aware adult, the stranglehold of toxic shame has to be washed away so one can "see clearly".   Dealing with toxic shame is genuine Shadow Work, because it has so much emotional power, and resides so deeply in unconscious origins.

"Going down the trail" can now mean  consciously working with the  shame and guilt that deplete vitality and purpose - "becoming Shane/Shame" is to aquire self understanding, the ability to transmute the depleting (shadow)  energy into something positive.

Third Dimension of the Dream - "Shadow and Projection"

Jung believed that where there are intense negative reactions to someone or something, there probably is a projection of one's shadow issues lurking in the background.  "Shane" also happens to be the name of someone I have in the past intensely disliked, and this dream has invited me to examine that.

Shane was an egotistical young man who married a young woman who worked for me.  I often described him as "opportunistic", and ended up giving them, without cost,  my most profitable business,  which I had regrets about.  I've had a lifelong pattern of giving myself away, and the young man, not surprisingly, soon took full credit for everything.  My dislike of "Shane" really was hatred of my unconscious pattern of "giving my power away" that I  received from my mother.

In "becoming Shane" in my dream, I actually was given a "shadow blessing".  Now I go down the road now taking good advantage of the opportunities that are given to me (being fully "opportunistic"), and taking deserved credit for the work I do.    In my pack are all the  qualities of self-protection I need.  In so doing, I'm able to forgive myself for poor choices in the past, and the anger I felt for "Shane" has dissipated as I take responsibility for its source in myself.

Years ago I was married to a talented artist, and after we were married he became interested in my mask business, so we became business partners as well.  We received a commission for a collection of special masks from a famous magician, and together met with him to discuss the particulars.    Our house was made so that if one came through the door, my studio was at the front of a long hall, and his studio was at the end of the hall. I was not surprised when the magician, who I admired for his stage work as well as his contribution to the Pagan community, came to visit. He waved at me as he walked down the hall to visit my ex. A day later I asked my partner why he'd come by, and he told me that he'd brought the contract to sign.So he had, and they had signed it.

But both of them had failed to notice that my name was not included on the contract.


There is a feminist dimension to this dream for me as well - one aspect of the meaning of "becoming Shane"  means not being co-opted, "giving away credit" to men because I'm a woman.  Things have changed but that issue is still present.

Fourth Dimension of the Dream - "The King"

The last dimension of this dream has been slow in coming.   I've been a great fan of Tolkien's Lord of the Rings ever since I could read.  Towards the end of the book, an indignant hobbit cries out against an usurper that the  "rightful ruler"  was the "Shane of the Shire".  So the final meaning of this name, for me, is "King" - the "King of myself".

(Actually, I learn only recently, Tolkien used the term "Thane" and not "Shane" - but since I didn't know that until last week, the meaning remains the same.)

The woman went ahead on the trail.  And now,  I am both the man, and the woman, and this integral dream affirms that I can, and should,  proceed with the means to be "the king" of my life as I go forward into the unknown territory of my 60's.  Below is the mysterious blue  ocean of the unconscious, the greater life of the soul.

I proceed  down the trail, walking stick in hand, my pack full of  useful tools on my back.  And  the high and holy view of the vast ocean below is truly magnificent. 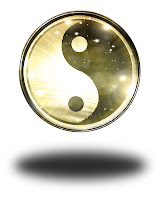 *One more funny synchro attached to this is that somehow I've become subscribed to JET magazine.....if a friend wanted play a joke, I would imagine they'd come up with something like a subscription to "Modern Mechanic" or "Crochet Today".  But a magazine for black people? I like the magazine, but I'm definately vanilla colored.   I get it every week......so I'll just take this as a weekly affirmation.  The Chronicles of Shane.
Posted by Lauren Raine at 1:46 PM

I think it is no coincidence that I have also been on a path of self discovery this past year also using Jungian psychology, dreams, surfacing shadows and integrating my animus. I didn't really look far enough ahead to wonder how the 'progress' would manifest. I have had amazing success with many dreams symbolic of the closure I need. This is a life-long process, and isn't it fun? Keep up the work, and thankyou for sharing. I don't know anyone else who is consciously on this path. Gail

Thanks Gail, I feel like the integration of shadow and components of self - the "Dark Goddess" - is something going on both personally and collectively. You're right, it's a life-long process - there's no ultimate place to get to, or place we really come from, is there?