Pilgrimage to the Callanish Stones 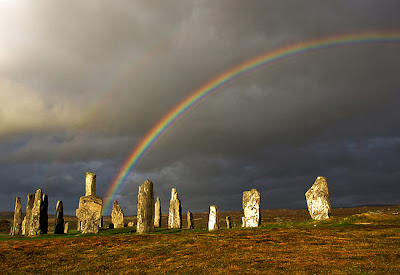 "Older yet and lovelier far,
this Mystery,
and I will not forget"
Robin Williamson ("5 Denials on Merlin's Grave") 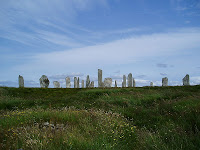 I have always wanted to see the Callanish Stones, far out in Scotland's Outer Hebrides.  The Stones (Clachan Chalanais or Tursachan Chalanais in Gaelic) are on the west coast of the isle of Lewis  in the Outer Hebrides of Scotland.   Construction of the site took place between 2900 and 2600 BC, though there were possibly earlier buildings before 3000 BC. Amazing.
No, let me amend that.
I have always wanted to lay my head on the green breast of the Great Mother, dreaming Annu, and stand with my hand on a great stone made of the oldest rock in all of Europe, raised by Annu in the mists of time, and  raised again  in  mystery by an  ancient people laboring on a far island lonely in  the windswept Northern Sea long before even Stonehenge was raised.  I  want to see the Summer Solstice Sun rise between those stones,  or see the moon rise between those portals to the the heart of the Earth they en-circle.  I do not believe that one can "see" the Callenish Stones.  I think one must go in pilgrimage, perhaps not on one's knees, but bringing an offering, and an awed and reverent mind, ready to receive vision and instruction from the Numina that surely still live there.  And perhaps only poetry can do justice to the experience.
I've been wondering why I've felt so strongly about going to England this summer.  I feel great honor at being able to share my work at the Goddess Conference, and fascinated by the opportunity to learn about standing stones and crop circles and earth energies at the  Glastonbury Symposium.  It seems a nice symmetry as well that the person who introduced me to dowsing and Earth Spirituality all those years  ago, Sig Lonegren, also lives with his wife in Glastonbury.  Circles.  But gradually I've been realizing that this trip is really a pilgrimage.
In a previous post I mentioned a vision I had back in 1989.  In that very tangible vision, I saw myself flying over a circle of standing stones in a very green place - people in white were walking through the green to gather there.  Then I saw myself flying over layers and layers of South Western petroglyphs - they just kept receding into the red rock, an overlay of  Story.  Finally, I flew over a freeway system in Los Angeles, but the pattern of the freeways became a figure 8, the infinity sign.  Patterns, Pictographs, to it seemed a language of Gaia speaking through the "works of man".   Spider Woman's Hands. 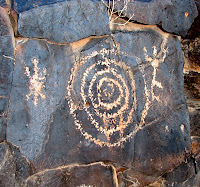 Dreams and visions have many dimensions of meaning, and they speak in a language of symbol and myth with an order that is not always within linear time.  Having said that, I re-member, as I write this, that long ago vision I had while sitting in my truck at a rest stop in Virginia (not very romantic, that part.  But sometimes you don't have to climb mountains, apparently.)

Most of my blue-eyed ancestors came over to this country from England.  The family were shipbuilders.  There's a lake in New Hampshire, a lake in California, and a lake in Minnesota named after adventurous family members.....they got around, and apparently also liked to be near water.   And a few ancestors, who I know less about, were already here.  And I more or less grew up in Los Angeles, so there is that dimension to my personal history. 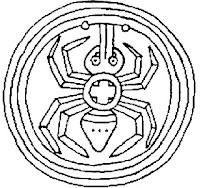 With my Spider Woman project, I think I've done my best to penetrate "layers of story" here in the Southwest, for Grandmother Spider Woman, in Hopi and Dinah mythology, and perhaps with the prehistoric Mississippian peoples as well.......is often viewed as none other than Mother Earth Herself, the Creatrix/Weaver at the center of things.
Perhaps this pilgrimage will reveal more of what that 1989 vision meant.  And perhaps some of the meanings of that vision I've already lived.   More on this as it unfolds.

Here BTW is a wonderful magazine about Earth Mysteries particularly in Great Britatin:    Northern Earth
I'm grateful to Rupert Soskin and Michael Bott for their 2007 film "Standing with the Stones", and in particular, the video excerpt below on the Callenish Stones.   To read more about Rupert Soskin, visit his website:
http://www.standingwithstones.com/Landing.html

everything we know.
Alice Walker

I've never understood the meaning of these stone circles. There are around 1,000 circles across Western Europe. There's one a few miles from me (Rollright). Some of the stones at Stonehenge are 50 tons each. The organisation and engineering required is formidable. Why do it? They are as ancient as the pyramids, and as enigmatic. It's tempting to wonder if it's the same reason behind both. Something to do with death and eternity. But what exactly.

Hello Robur, I think that's part of the wonder - that no one really knows. But many have come up with hypotheses. One of the best I know of is Paul Devereaux's Dragon Project
(http://www.pauldevereux.co.uk/body_dragonproject.html). he and fellow investigators also discuss their findings in a 1989 book EARTHMIND. Many of the leading researchers into Earth Mysteries, which almost always include the megalithic sites, gather at the Glastonbury Symposium in July - I'm looking forward to hearing some of them speak.

Are you going to Callanish while you are over there?

Yet another mystery of our planet. Beautiful. Lauren, if you don't mind I added your webpage link to a post I just wrote on masks. I of course speak more of Mardi Gras and Carnival, however at the end I listed your website as a place to visit and learn more information regarding masks, specifically the sacred feminine. I hope it is ok.

Dear Lauren, So glad you will be able to go to England this summer and be part of the gathering of goddesses. Lovely video clip about Callanish, I was not as aware of this circle as others, but near Glastonbury are of course Stonehenge and Avebury, the latter actually being preferable for fewer tourists and being able to touch the stones and feel them. My work is in calligraphy and book arts; last year I completed a series of books using the incomparable Alice Walker poem; three of them can be seen on the top row on this page: http://cariferraro.com/gallery/ and more images by clicking through on all the thumbnails. This poem got into my head and heart and blood for a few years; I often recite it to myself in prayer. I have your blog linked on my Journal page and like to follow your work; you explore so many of the same themes I do and I've been aware of your ritual mask work for many years.

Strange, your blog will only let me make a comment with my Google account, which live links my name to my now-defunct old blog on Blogger. Please refer to the link within the post to see the images! I keep the Blogger site for a while longer for people who are linked to me that way, but it NOT my current site. Never sure about the best way to handle a "move" on the internet.
Best,
Cari

Hi Gail, yes, Goddess willing, I'm going to the Hebrides! I figure it's now or never.

Thank you, Cole and Cari, for your thoughts - Cole, I'm honored.

Cari, I'll look forward to seeing your site! I encountered the poem you speak of first when I heard her read it at a wonderful ritual organized by Jennifer Berezon called "Praises for the World".