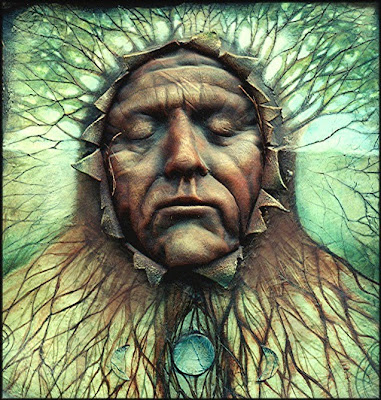 For 7 Generations: the Indigenous Grandmothers Film 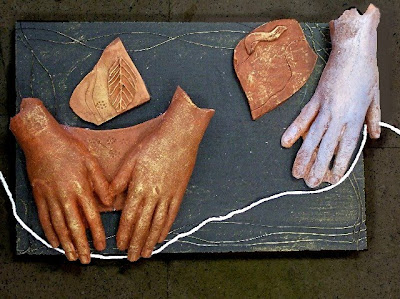 Mitakuye Oyasin, "all my Relations".

As I sit here considering the audacity of writing an application for a Guggenheim (well, what the heck. It's kind of like buying a lottery ticket, only it takes a lot longer)..........I try to articulate what my theme of a "Webbed Vision" means ..........foremost, it is participatory in practice, and vision: like a web, everything is meant to expand outwards from a center. By enacting and exploring the theme of "weaving a webbed vision", through cross-disciplinary shared art process, it would be my hope that a vision of interdependancy.....could become personally articulated, and practically conceived, as participants engage in a collective conversation. 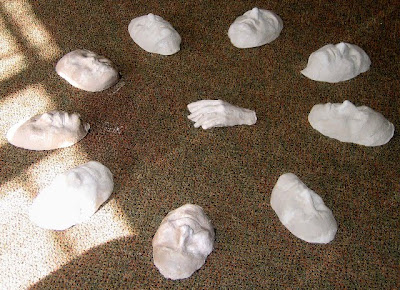 Dr. Keller's quote has been a long meditation for me. It was the basis for the group sculpture that hangs now in the hallway at Wesley, "Weavers". Dr. Keller derives her term from the name Penelope, which actually means in archaic Greek "with a web on her face", indicating that the name's origins probably derived from the oracles or fates of ancient times. To see world through the lens of a "web" is to see the world within a paradigm built of relationships: interwoven relationships between all things, from the intimate ecology of a community vegetable garden, to Gaia Theory, to family systems, to particle entanglement. "Good Relationship" thus is a spiritual practice that keeps us connected to a higher order. The "Web" is the underlying truth of being.

"What is the new mythology to be,
the mythology of this unified earth
as of one harmonious being?" 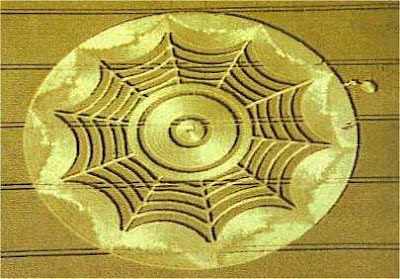 " The new myth coming into being through the triple influence of quantum physics, depth psychology and the ecological movement suggests that we are participants in a great cosmic web of life, each one of us indissolubly connected with all others through that invisible field. It is the most insidious of illusions to think that we can achieve a position of dominance in relation to nature, life or each other. In our essence, we are one."

Artists are myth makers, but we all have the capacity to be artists; and we all participate in the weaving of today's mythology. The time to think of art as some kind of isolated activity performed by macho, heroic, alienated "genius" is over. I have always felt ill at ease with many "art world" assumptions I got in the course of my education, which is why I so much admired people like Judy Chicago, Daniel Dancer, and Alex and Allison Grey, people who stepped way outside of the "rules".

When Tibetan monks make their beautiful sand mandalas, they are performing a ritual blessing, a prayer that incorporates symbols with a rich lineage and context. When Navajo medicine men make one, they are creating a portal for healing. In traditional societies, masks are meant to be, literally, spiritual vessels for the Gods and Goddesses to enter this world within sacred space, ritual and drama, and commune or bless those present. This was a sensibility that was very clear to me when I created the Masks of the Goddess collection; even signing my name to the masks seemed not quite right, since it was a collaboration on multiple dimensions from the very beginning. I do not know how to demonstrate this, but I see it all the time.

I think I had my first "Spider Woman" epiphany while hiking in the Superstition Mountains of Arizona long ago. In search of petroglyphs, I huffed up the mountain thinking of native American mythology as I climbed. I remember, specifically, I was thinking about a wonderful story from Ursula Leguin's "Buffalo Gals and Other Animal Presences" * - in the title story, a little girl goes to meet Grandmother Spider Woman. When I stopped to rest, I enjoyed the dramatic union of "red mountain meeting the blue sky". Then, gradually I noticed I was viewing the landscape through a transparent spiderweb - suspended at eye level - from a cactus and chaparral bush before me. Turn slightly, it was invisible. Turn again, there it was, just as plain as day. A "Webbed Vision". 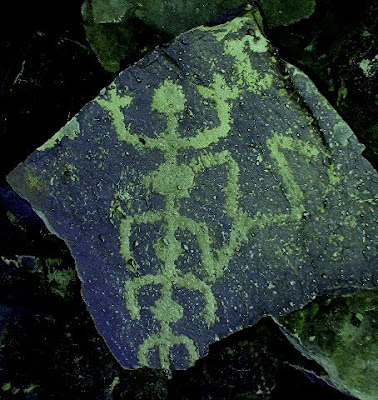 "Spider Woman", Anasazi petroglyph (courtesy Bill Pennington, 2007)
Recently I read the following blurb from a little article slipped in between something about some media star's divorce problems, on the AOL site:

"Human activity such as fishing, agriculture and logging have greatly accelerated the rate at which species go extinct. As of last year, one in eight birds, one third of amphibians and almost a quarter of all mammals were threatened with extinction, according to the International Union for Conservation of Nature....Alroy's study looked at 100,000 fossil collections spanning hundreds of millions of years, with a strong focus on marine life. He found that dominant creatures can be dramatically affected by large extinctions."

I would think this would be terrifyingly obvious........it is amazing to me that we need, apparently, an expert to determine, from 100,000 fossils, that as "dominant creatures" who are the agent of the 6th Extinction, it just might impact us as well. Why are we so paralyzed? How have we lost "a webbed vision"?

My grandson is going to reach his adulthood in a world without tigers. Snow leopards. Prides of lions. Mountain gorillas. Oh, they'll be around, maybe, in zoos, or in nature preserves. But not in the wild any longer. He will probably also come of age in a world without seafood that is safe to eat without the risk of mercury poisoning or absorbing plastic particles ingested by the fish. A world without many of the songbirds we now enjoy, without many of the butterflies, the frogs. A world where pristine beaches without plastic debris and polluted waters belong only to the very wealthy, a world preoccupied with escalating war as resources continue to become scarce and population continues to explode.

How do we bring alive, now, this new and ancient mythos, this template of relationship ......a "webbed vision"?

“Hope now lies in moving beyond our past in order to build together a sustainable future for all the interwoven and interdependent life on our planet, including the human element. We will have to evolve now into a truly compassionate and tolerant world – because for the first time since the little tribes of humanity’s infancy, everyone’s well being is once again linked with cooperation for survival. Our circle will have to include the entire world.” 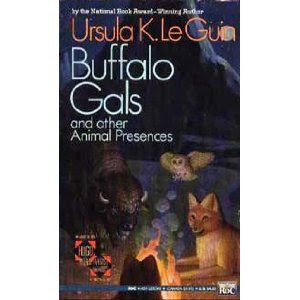 **There is also a wonderful story in this collection called "May's Lion" in which an old woman is visited by a dying mountain lion. Leguin shares this scene from the perspective of our contemporary world, and what it might have been like for an old native woman ("Rain's End) in another time and place.........here, the lion has come to her to die, and she is honored by this, offering her presence to the lion, her prayers for it's journey into the next world. When "May", in this time and place, tentatively calls the police about the lion, they shoot it - and in some incoherent way she does not fully understand, May knows this was not right, she somehow lost something important.
Posted by Lauren Raine at 3:54 PM

Thanks for sharing. Your ideas always provide inspiration. Blessed Be!!!