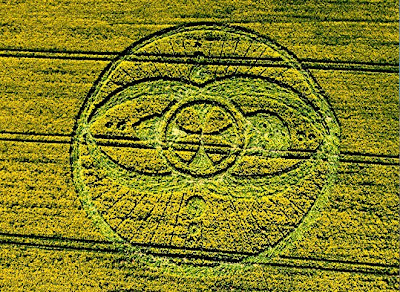 “What might we see, how might we act, if we saw the world with a webbed vision? The world seen through a web of relationships…as delicate as spider’s silk, yet strong enough to hang a bridge on.”

Catherine Keller, From a Broken Web

I felt like writing a bit about the "Spider Woman" crop circle I found......I was somewhat amazed to find this obscure symbol in a crop circle site! Mr. Silva believes that it is a man made circle, but reminds me that that does not have to negate its power as a symbol, or for that matter, a beautiful work of earth art.

There was a legend that when the world was going to change, Spider Woman would return again to help her Relations, as she has done in the previous worlds.
I have often thought that the World Wide Web just might be Her latest appearance.

I am grateful to Mr. Mark Fussell and the Crop Circle Connector for feedback, as well as "Crop Circles Reflections of a Season, by Mr. Fussell and colleagues.

Below is the "circle" in black and white, and next to it a detail from a pre-historic Mississippian shell ornament. I believe this one is from Spiro Mound in Missouri, although I will have to check my reference books - the ornament, most probably worn on a cord around the neck, would be anywhere from 400 to 1,000 years old. 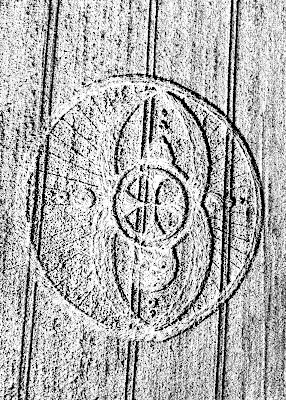 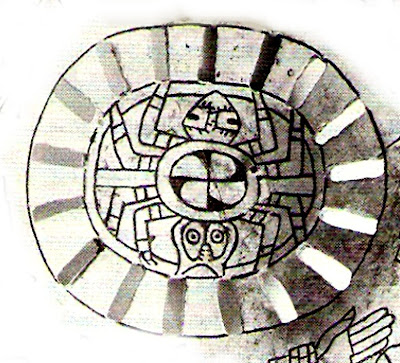 I see the Spider Woman image in the crop circle (without all of the legs), the cross, the head and "womb" shapes, and rayed "web" or "strands" emanating from the spider/creatrix figure. (There is often an emphasis upon the "womb" center of the spider, as Spider Woman is associated with the Earth Mother/Creatrix, from whose body all things emanate).
To me, obscure as it may seem, these "crop circles", and the interest, even the controversy surrounding them, are important as contemporary icons manifesting within the collective consciousness, "words" from a timeless language, the iconography of humanity. They are communications worth meditating upon. 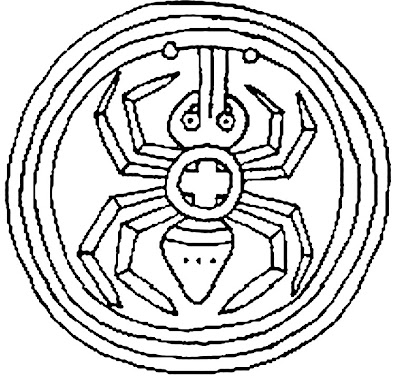 Spider and Cross Gorget, ca. A.D. 1300, Fulton County, Illinois, Dickson Mounds Museum
Whether created by paranormal forces or through the efforts of contemporary "earth artists" who prefer to further controversy about their work.........these are still sacred symbols that exist on many layers of meaning. Mr. Silva is right; the origins of the "crop circle" are not as important as what its meaning for our time might be.
This symbol, with it's origins in the remains of the "mound builder" sites in south eastern U.S., somehow found it's way to Great Britain last summer. No one knows the exact significance of the spider and cross in the ornaments pictured above, but Spider Woman has an ubiquitous presence throughout the Americas. It's generally thought the "Spider and Cross" represents the Great Weaver (Creatrix)/Earth Mother, the cross on her back representing the union of the 4 directions, thus, balance or completion.

Spider Woman's origins go back as far as the Maya. The Spider Woman/Weaver Woman was a goddess of the Pre-Columbian Teotihuacan Maya in Mexico, discovered on the ancient murals there.* I see that I"m moving into a dissertation here, so I'll cut to the chase.

What meaning could this symbol have for us today?

Spider Woman, the Great Weaver, was also called Thought Woman ("Tse Che Nako" ) among Pueblo peoples. She brought all things into being with what she thought about, the "stories she spun about the world" - like the spider, she "spins the world into being" from her own substance. All things are connected upon the Great Web.....and this power to co-create, to "make the world with the stories we tell" she passed on to her Relations.**

To the Navajo (the Dine`), Grandmother Spider Woman is a wise guide whose teachings can be heard in the wind; but she will only offer instruction to those who have achieved a certain level of maturity or initiation. To the uninitiated or immature, she will appear only as an insignificant insect, her power and words unperceived. 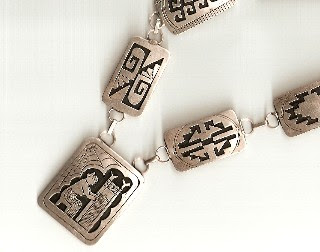 It's worth noting that it is the "end" of the Hopi calendar as well as the Mayan (2012); the "4th World" is coming to a close. In each previous world, the breaking of balance, loss of harmony, greed and war brought about destruction and chaos. Here's from Wikipedia: (http://en.wikipedia.org/wiki/Hopi_mythology):

"Some contemporary writers tend to posit an absolute importance of the feminine to the Hopi ............In this interpretation, the Hopis traditionally saw the goddess Spider Woman as the creator, "Grandmother of the sun and as the great Medicine Power who sang the people into this fourth world we live in now.”

In other interpretations, Spider Woman is an intermediary between Creator (Tawa) and this plane of being. Generally, it is agreed that in each "previous world" the people fell from harmony, and had come to live contrary to Creator's plan (Tawa)....thus, the people

"were led (usually by Spider Woman) to the next higher world, with physical changes occurring both in the people in the course of their journey, and in the environment of the next world. In some stories, former worlds were then destroyed........whereas in others people were simply led away from the chaos which had been created by their actions." (Wikipedia)

I am trying to understand why I'm so struck by this crop circle, which, like so many others, occurred near old sacred sites of Great Britain, "power centers" of the ancients.**** Perhaps, in this "way of telling, way of praying", Spider Woman is again invoked, to help, to bring us again through the kiva, the "sipapu", the "Birth Channel" of the Mother Earth.....into the "5th World" yet to be. 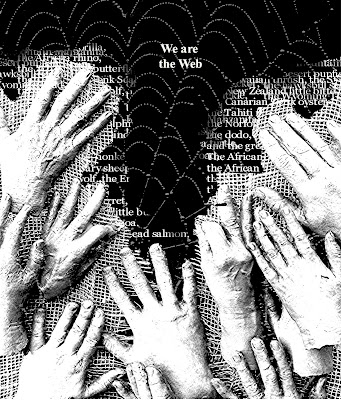 **Although often referred to as the "Great Goddess" of Teotihuacan, anthropologist Karl Taube was the first to appropriately christen her the "Teotihuacan Spider Woman" in his article in the 1983 edition of The Journal of Latin American Lore after his evaluation of the murals found there.

Grandmother Spider came to me in a dream in 2006. At this time I was a care giver to many and was consciously inviting a shift in energy patterns. Researching Grandmother Spider's gift on the woolfs_moon web site I found this,"The paradox in this for the Spider individual may be that they will deny an awareness of their own creativity for many years in deference to other areas of their lives...often the area that distracts the Spider Soul is that of relationships. Much like Grandmother Spider is forever aware of her children, the two-legged will tend to focus much of their attention on loved ones rather than nurturing and fulfilling thier own needs. If Spider Soul does not give license to this creative spark, it will feel as though their life's blood is slowly ebbing away or they are being drained of energy." I didn't or couldn't heed Grandmother Spider's gift of hope so am living my creative life vicariously through you. I'm enjoying every thing you post!

I want you to know that i enjoy your posts very much.
XXXm

Thanks for your kind comments! I feel like I'm following a touchstone here, grasping after some mythic association that is really important to me..........a meditation indeed for me. I have, by the way, met a number of people who regularly "communicate" with Spider Woman in the dreamtime, as an inner mentor. She is definately around these days........

I think, Gail, that if your obligations to others are so great that you must consistently deny your creativity, then they are too great, the price is too high, and ultimately, it's not going to work. I believe we're here to be in Relationship, but that relationship is also with ourselves, a "moving point of balance". Just had to say that......