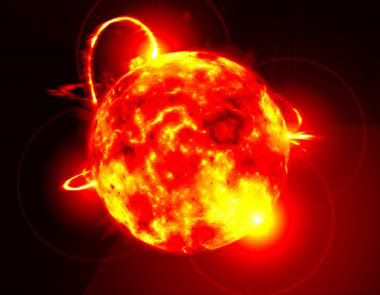 My friend Fahrusha (the name means "Butterfly" in Arabic) is a well known psychic in New York City. She has a fascinating blog, Fahrusha's Webblog that often deals with issues and controversies of the paranormal, consciousness, as well as contemporary issues and culture. In the midst of my recent flurry of "Butterfly" synchronicities, Fahrusha sent me this article about the sun affecting the decay of radioactive matter - in essence, certain scientists are saying that the rate of decay is speeding up. I know this post is far from being about art, but I was so stunned by reading I felt I should share it.

"In fact, some evidence of time dilation has been gleaned from close observation of the decay rate. If particles interacting with the matter are not the cause—and matter is being affected by a new force of nature-then time itself may be speeding up................Researchers have correlated the anomalies in the decay rate to a 33-day period. That time frame matches the 33-day rotation of the solar core. Such a match strains credulity as being a mere coincidence."

The Sun Influences the Decay of Radioactive Elements,Tudor Vieru, Softpedia

These look fascinating, Lauren. Thanks for posting. I've got to look for that book you recommended, too, on the Chrysalis!

Thanks.........it's disturbing, but I felt I needed to post it. I hope you enjoy Slater's book - I'm waiting for my copy of your book.