Shaman Masks, the Songhai, and Yemeya 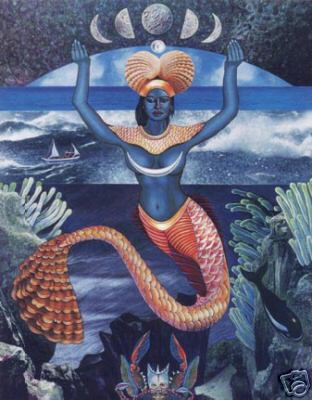 As I prepare to go to the Goddess Rising Conference  it occurred to me that it will be occuring at the edge of the Pacific Ocean, in Malibu.  And I remembered that just a few weeks ago I was making offerings at the lip of the Atlantic Ocean, and the Hudson River, because an Ifa priestess, Joy Wedmedyk,  told me to do so this summer.  In order to honor Yemeya,  who she called "The Mother of the World".

There is a poetry in this, a "Conversation" , and I felt like exploring it a bit more here.
In July I visited a friend who has been a medium since childhood, and has also pursued shamanic and Spiritualist training.  Spending time with her has, truly, taught me so very much. Wendy has been both clairvoyant and clairaudient since childhood, and has worked with spiritual mentors since childhood that she speaks of with intimacy.  In the course of my visit with her, I had a "visitation".   I have been thinking about it  ever since.

We were sitting at the table drinking coffee on a sunny morning,  and Wendy paused and said "Excuse me, but someone is here".  Her eyes had misted and tears ran down her face, which she said happens when there is powerful energy present, usually the presence of a spirit with a message.   She said that a very tall, thin, black man wearing a very flat disc like mask patterned in  black with a white band across the eye holes and a red spot on the forehead was standing right behind me.  She said she saw him  put his hands on my shoulders. He told her he was something that sounded to her  like "samarai", and that he wanted me to help in some way.
When I asked (the energy in the room had become intense, and I felt quite vulnerable) what I could do to help,  he told her that I would help to "revive Yemeja".   I, of course, neither saw nor heard any of this.   Wendy said she also perceived a  number of people with him, she felt they were his tribe, and she saw them by the ocean.  They were showing her images of the ocean, and how they made offerings  with baskets of fruit, flowers, and small shells.  Tears were running down her face (Wendy says that when the energy is very intense this happens) and she said that he was thanking me.
Then they were gone.   I thanked him and said that I would do what I could to the best of my abilities.  I do not know what that is though, except to keep doing what I have been doing, which is to tell the stories of the Goddess with Her many faces through my masks and through my writing.
After the Visitor left, the energy in the room returned to normal breakfast, Wendy's tears ceased, we made some more coffee, and talked about it.  We couldn't figure out what the "samurai" thing was about, and so we looked up "African samurai", etc.  Here is where it becomes extraordinary:  there is a people, once an ancient nation, the Songhai Empire,  that extended into Burkina Faso, Mali  and parts of Western Africa, including some lands to the west that met the ocean.
They would most certainly have had contact with the Yoruba people of Western Africa and  with Yoruban religion.   These people have a rich history, and cultural heritage,  among which are also arts and traditional elaborate masks, decorated with patterns in black, white and red, that are associated with shamanic, ancestral, animal spirit  and ritual practices.  The masks are called "plank masks" because of their flatness (I assume), and the people are called the Songhai.  Something neither of us knew anything about until we   learned about it on Google.

I've been thinking about this astonishing visitation ever since.  I reflected that Yemaja, Mother Ocean, originates among the Yoruba religions of  Western Africa.  Yemeja became especially  important in the Americas as the slaves were brought to the Caribbean and to South America, where  admixtures of the Yoruba religion and Catholicism became Santeria and other admixtures. Yemeya was especially  honored because She  carried the souls of their homeland in her waters.

Shortly after leaving my friend's house, I went to the Starwood Festival, where I ran into Joy Wedmedyk.   I've known Joy for years, having met her at workshops she leads at Brushwood and elsewhere.  Joy studied with Malidoma Some in this country and also in Burkina Faso in Africa.  Since then she has also become an  initiated Priestess of Ifa,
Joy is  dedicated to Yemaya,  and when I saw her at the Festival to attend a workshop she was giving there, she opened her work with us with a prayer to Yemeya:  and she called Her  "The Mother of the World".   The Goddess.  At that moment, I think I understood the meaning of the mask shaman's message!
Joy told me that I needed to go to the ocean, and make offerings to Yemaya.  This I will do  when I find myself on the Pacific Ocean for the Goddess Conference  I will be attending in, of all places, Malibu, in a week.  "Reviving Yemaya", from Joy's perspective,  is reviving reverence for  Our Mother, the divine Feminine,  our living Earth and Her Waters. 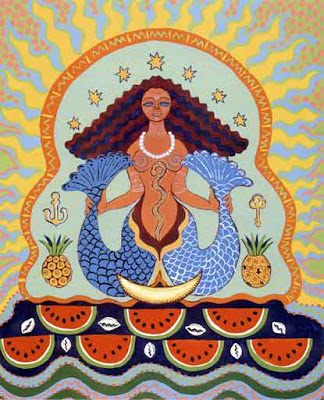 I looked on Google for flat disc masks such as a tribal shaman might wear, and found that there are indeed many such among the peoples of Mali and Burkina Faso. I did discover as well that there is an extensive group of people, in these lands as well,  with a long cultural history,  called the "Songhai", which sounds quite similar to "Samarai", and some of their domain touched the western ocean on Africa's shores.  I learned about the  Bwa masks of Burkina Faso when I Googled "Songhai shamans".

"Bwa masks are believed to possess special powers which are controlled by those who wear them. 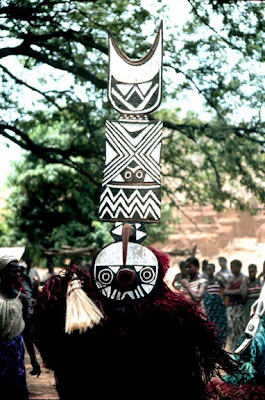 These masks are plank shaped with a circular face at one end and a crescent moon at the other. Their wearer looks through a hole in the mouth...........The plank section is decorated with geometric patterns which are an essential design element in many African masks and carvings.
Geometric patterns create an external rhythm which echoes the internal spiritual energy of the artwork.
It can also be used as a coded language where the design communicates secret knowledge to those in the know. The designs on this Bwa Mask, which is used to celebrate boys' initiation to adulthood, represent information about myths and morality that the boys must learn before they can be accepted into adult society." 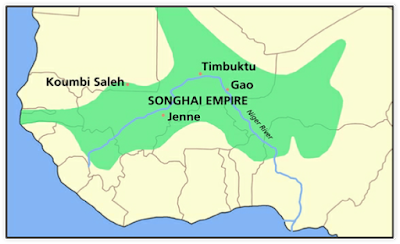 So glad to read this as we are holding my Croning Ritual on St. Augustine, FL beach on Sept. 29. I would so love for you to be able to be a part of it. I will incorporate blessings and offerings to Yemaya in your honor.

Santeria is a fascinating belief system. The saints and the orisha gods, uniting and melding for a common purpose, to combine powers, now THAT is a story worthy of fiction. I mean, really. Who among your neighbors would believe this stuff is true?

Thanks to both of you! I'm back from California now, with a lot to think about......but I did make my offering just above Malibu on the lap of the blue, blue Pacific ocean, where I have so often played when I was young.