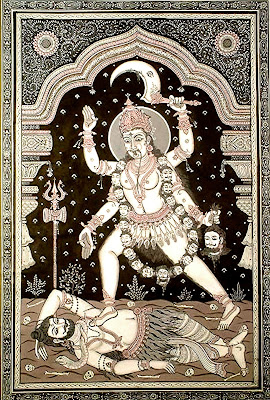 "Kali is the Goddess of the dissolution of time and structures.  She clears the way for those impediments of evolution that have arisen.  The Tibetan translation for "Kali Yuga" means literally the  "dregs of time", the bottom of the barrel of time.  Time has acquired such "temporal density" that it can actually be felt in the body.  And the definition of "Temporal Density" is that we have too many units of events in each day to fully or effectively assimilate them.........Another aspect of Kali Yuga   which is related to temporal density is that there is seasonal disequilibrium.  The climate and the seasons go out of whack."


I've been wanting to post this talk by John Steele for a while now.  I met John Steele in 1989, at the Symposium on Art and the Invisible Reality at Rutgers University, sponsored by Dr. Rafael Montanez Ortiz.  I wish there was another such conference!  I presented a performance piece called "When the Word for World Was Mother", and not too long after John kindly sent me his amazing book Earthmind: Communicating with the Living World of Gaia, in collaboration with  Paul Devereux and David Kubrin.  It remains a very important book for me.

John J. Steele is an aromatic consultant, archaeologist, author and visionary.  His work, whether with aromas or philosophy, engages questions about the nature of memory, time, consciousness and being. He has worked with Terence McKenna and Paul Devereux (The Dragon Project).   Steele  explores Vedic culture, Kali Yuga,  geomancy and what he calls "geomantic amnesia", geobiology, time out of balance, shamanism, the effects of geological formations on human consciousness, cross state retention, and the importance of sacred sites and spaces. EARTHMIND explores ways of interfacing with the earth for planetary healing. And Planetary Healing is also our healing.

In this collection of audio recordings and seminars, John Steele gives an overview of how geomantic traditions have influenced human awareness, psychology and ways of life. He explains how sacred geometry can grant us access to "Present Time", the great and infinite place where silent knowledge flows into our consciousness unrestricted by the objects that surround us, and in many ways, "own us".


"The memorial capacity is the key to the strength of a computer, and our computers are valued by their increasing capacity to store memory.  There is an emphasis upon the acquisition of memory that can be stuffed into a computer..........What happens after a while is that the system becomes constipated by too much hoarding of memory.  This hoarding of memory (in human terms)  sets up a kind of psychological density, and as the system becomes clogged it becomes brittle.  That is to say it cannot react quickly to crisis situations because it is overloaded with information."

"The density of objects in the environment creates a corresponding density of memory necessary to record objects, and this density of memory creates temporial density.  Temporal density is a function of memorial density and memorial density is a function of object density.  You will notice that those cultures that have the fewest objects live in the dream time.  You look at the Australian aborigines with their minimal object array and you see that they live in a completely different time frame. The Bushmen the same.  As temporal density occurs it sets up this extended unconscious array of time - time is generated."


As I listened to the above, I thought of an article Geomancer Sig Lonegren wrote a year or so ago, in which he commented that he believed the great Megalithic structure of Stonehenge was a "last attempt" to retain right brain, or "dreamtime" consciousness, as human culture began to change during the Neolithic.  In a sense, he was saying that a greater contact with "the collective mind of Gaia" was gradually being lost.  Perhaps it is now time to regain that contact, in a new way.

I feel John Steele, and his colleagues, are so important in understanding our place on the planet, and as always, I'm saddened that they are so little known.

(I saw that the original utube interview I posted here has been removed from Utube.  I found something similar, and post below.)

‘Earthmind: Communicating with the living world of Gaia’ by Paul Devereux with John Steele and David Kubrin

"The authors make much of the effect on mind of the electromagnetic properties of the Earth and its rocks. They believe that communication with the Earthmind or anima mundi can best be achieved at sacred sites, facilitated by the crystal structures within the dolmens there. However, the authors believe there are hopeful signs of a revival of belief in paganism and in Earth’s spirituality, which would contribute to lessening our desecration of our planetary home. The key to such a consciousness revolution rests, in the opinion of the authors, with acceptance of the existence of a universal field of consciousness and our spiritual integration with it – what Peter Russell (The Awakening Earth)" described as the Gaiafield and which Devereux calls Earthmind.

for a great review:   http://greenspirit.org.uk/bookreviews/2013/05/earthmind-communicating-with-the-living-world-of-gaia-by-paul-devereux-with-john-steele-and-david-kubrin/
Posted by Lauren Raine at 5:30 AM

And ah, then there's McKenna.