I've been working on a Kali/Black Tara mask, and reference a wise article about the Dark Goddess, "Endarkenment", that I have been wanting to share for quite a while.  I take the liberty of re-printing here a wonderfully insightful  article by Theologian Molly Remer,  from the   Feminism and Religion website.

Black Tara is the ferocious, evil destroying aspect of Tara, and in many Tibetan Buddhist paintings it is easy to see the symbolic overlay of  Hindu Kali.  Kali's name derives from "Kala", which means Time. In the Mahanirvana-tantra, Kali is one of the epithets for the primordial sakti": 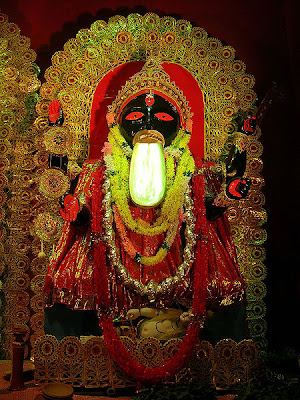 "At the dissolution of things, it is Kala [Time] Who will devour all, and by reason of this He is called Mahakala [an epithet of Lord Shiva], and since Thou devourest Mahakala Himself, it is Thou who art the Supreme Primordial Kalika. Because Thou devourest Kala, Thou art Kali, the original form of all things, and because Thou art the Origin of and devourest all things Thou art called the Adya [primordial Kali]. Resuming after Dissolution Thine own form, dark and formless, Thou alone remainest as One ineffable and inconceivable. Though having a form, yet art Thou formless; though Thyself without beginning, multiform by the power of Maya, Thou art the Beginning of all, Creatrix, Protectress, and Destructress that Thou art"**


It is from this dark space that we emerge—whether from our own mothers or from the more mysterious cosmic “sea” of soul—and it is to darkness that we return when we close our eyes for the final time.

I find that within Goddess circles the idea of “the dark” remains commonly associated with that which is evil, negative, bad, or unpleasant. The Dark Mother, while acknowledged and accepted, is often at the same time equated with death, destruction, challenge, trials, and obstacles. While I recognize that the concept of a dark, demonic, and destructive mother might too have a place in goddess traditions (as with Kali or Durga), I also think this is unnecessarily limiting and that the idea of the “Dark” in general is in need of re-visioning. It is not just with regard to the role or place of death within the wheel of life or the Goddess archetype that Goddess as Dark Mother and destroyer can be honored or recognized, but the Dark as a place of healing and rest can also be explored. 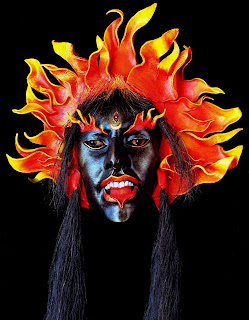 In her article “Revisioning the Female Demon” (1998), Elinor Gadon explains that there is a tendency in the contemporary Goddess movement to “ignore her dark side” and she remarks that, “in the fullness of her being she is both creative and destructive…The women’s spirituality movement needs a more inclusive mirror in which to recognize and recover elemental female powers that have been split between the peaceful, good nurturer and the evil, warlike destroyer” (p. 2).

In the book Fire of the Goddess by Katalin Koda, in the chapter Reclaiming the Dark Mother the author says:


The feminine qualities of darkness, moistness, birth, and blood symbolize the dark mother and our inner Initiate. We have been taught to deny these parts of ourselves and bodies; honoring the sacred feminine invites you to reclaim these as not only part of who you are, but a powerful aspect of your life. When we face our shadow, we are initiated into our deepest powers. We may be afraid of these parts; these howling, undernourished, repressed, and rage-filled aspects of ourselves that demand to be heard, but which we cannot bear to face. 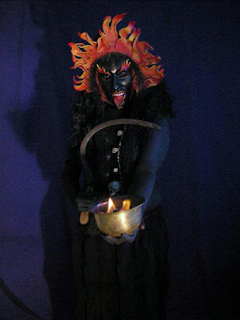 But what if the Dark side of the Goddess is not an evil, raging, and destructive side? In fact, what if the Goddess Herself is found in the dark? Judith Laura writing about dark matter in the cosmos writes, “might we call this ‘unseen force’ Goddess? Dark matter could be identified with the womb of the Mother, continually gestating particles, suns, galaxies, which flow from her in a continual stream…Dark matter might also be represented as the Crone aspect of the Goddess—dark and powerful” (Goddess Spirituality for the 21st Century, p. 181).

Part of thealogy’s task has been to re-evaluate the concept of darkness.  Jacqueline daCosta notes, “This darkness…equates with the darkness of innate, instinctive knowing, where we are within the womb of the Goddess” (p. 115). DaCosta’s observation is consistent with my own experiences and observations of the world. In darkness, things germinate and grow. The dark is a calm, holding, safe, welcoming place—we come from darkness and that is where we return. The womb is a place in which I’ve nurtured and grown my children and it is dark and safe in my experience of it. In fact, isn’t darkness the womb of all creation? It is from this dark space that we emerge—whether from our own mothers or from the more mysterious cosmic “sea” of soul—and it is to darkness that we return when we close our eyes for the final time.

Darkness holds our DNA. Our link to the past and the future. At the birth of the universe, some part of us was there, in that explosion from darkness. In the book Meditation Secrets for Women, Camille Maurine writes about the idea of descent and “going down” into one’s own dark places:  “There are times in a woman’s life when the call downward is a transformative journey, a summons to the depths of the soul. People tend to think of spirituality as rising upward into the sky. In the traditional (male) teachings, enlightenment is often described as a flight from the lower centers of the body, the instinctive and sexual places, to the upper centers in the head and then out. By contrast, a woman’s spiritual quest at some point leads to a soulful sinking down into herself. Everyone fears this descent, this sinking down. Yet sinking down connects us with the earth, with our personal ground, with our foundation. There is a secret in ‘endarkenment.’” [p. 210, emphasis mine]

The Dark Goddess need not automatically associate or translate into “bad” or “suffering” or “negative” or “shadow side.” I think of the darkness as a cocoon. I think of the womb. I think of germination. I think of a place to rest, to wait, to be still, and to transform. Emergence. Deepness. Rich earthiness.

I love the notion of endarkenment and that the downward call, the downward journey, like Inanna’s descent, is a hera’s journey of transformation, courage, and potency. In the same book, Maurine describes the soul in very different terms than in classic Christian conceptions:

“The realm of the soul is not light and airy, but more like mud: messy, wet, and fertile. Soul processes go on down there with the moss and worms, down there with the decaying leaves, down there where death turns into life. Deepening into soul requires the courage to go underground, to stretch our roots into the dark, to writhe and curl and meander through rick, moist soil. In this darkness we find wisdom, not through the glaring beam of will, but by following a wild, blind yet unfailing instinct that senses the essence in things, that finds nourishment to suck back into growth. Rare is the man who can take it. That’s why male spirituality is so often about getting out of the mess, about transcending the passions and bloody processes of life. Who can blame them, really? It takes a woman’s body and strength of spirit for this journey.” (p. 211)


My experiences with pregnancy loss have played a profound role in the development of, articulation of, and engagement with my spirituality. One of my favorite songs to listen to after my miscarriage experiences had a refrain of, “it is dark, dark, dark inside.” While previously not connecting to “darkness” as a place of growth or healing, during these experiences I learned, viscerally, that it is in the darkness that new things take root and grow. I also created a series of black and white mandala drawings during the year following my miscarriages and the subsequent year of conceiving, gestating, and birthing my new daughter.

Gloria Orenstein refers to endarkenment as, “a bonding with the Earth and the invisible that will reestablish our sense of interconnectedness with all things, phenomenal and spiritual, that make up the totality of our life in our cosmos. The ecofeminist arts do not maintain that analytical, rational knowledge is superior to other forms of knowing. They honor Gaia’s Earth intelligence and the stored memories of her plants, rocks, soil, and creatures. Through nonverbal communion with the energies of sacred sites in nature, ecofeminist artists obtain important knowledge about the spirit of the land, which they can then honor through creative rituals and environmental pieces” (Reweaving the World, p. 280). This speaks to me because of my theapoetical experiences of the presence of the Goddess in my own sacred spot in the woods behind my house, where I go to the “priestess rocks” to pray, reflect, meditate, do ritual, think, and converse with the spirits of that place.

I attended a presentation about birth stories at a conference in 2011 during which the speaker, Pam England, used Inanna’s descent as a metaphor to explain some concepts. She said that the place “where you were the most wounded—the place where the meat was chewed off your bones, becomes the seat of your most powerful medicine and the place where you can reach someone where no one else can.” This is what I feel like the Dark Goddess also offers. She is present when the meat is chewed off. She is there in the healing of the wounds and knowing Her, walking with Her, facing Her, leads to powerful medicine.


For each of us as women, there is a deep place within, where hidden and growing our true spirit rises…Within these deep places, each one holds an incredible reserve of creativity and power, of unexamined and unrecorded emotion and feeling. The woman’s place of power within each of us…it is dark, it is ancient, and it is deep.

Molly Remer is a certified birth educator, writer, and activist who lives with her husband and children in central Missouri. She is a breastfeeding counselor, a professor of human services, and doctoral student in women’s spirituality at Ocean Seminary College. This summer she was ordained as a Priestess with Global Goddess. Molly blogs about birth, motherhood, and women’s issues at http://talkbirth.me and about thealogy and the Goddess at http://goddesspriestess.com

I've been looking for a reading for my Croning and will use the one by Camille Maurine, "The realm of the soul is not light and airy..." Thanks for sharing.