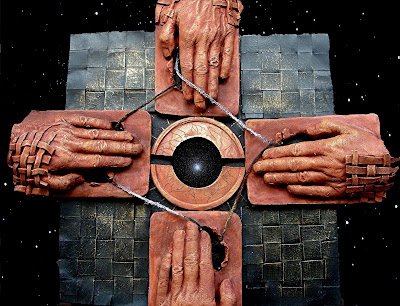 To me, synchronicities are touchstones, they point the way in the forest, usually indicating that I’m on the right path. I’ve never “followed” a synchronicity and ended up bored or in unfortunate circumstances. Instead they seem to reveal or emphasize what is most beautiful, meaningful, or helpful. I was honored when writers Trish and Rob MacGregor shared this story below on their wonderful Blog about Synchronicity a few days ago, and take the liberty of re-printing it below.

I began this summer's long wandering back to the East Coast, and re-visiting places and people that have been very important to me, as a kind of "soul retrieval", asking all along the highway "what should I be doing now, at this phase of my life?".  I've been richly, richly answered even as I continue to wind up and down the asphalt (currently enroute to Shutesbury, Mass. to visit a  shamanic healer, and old friend, Jewel at The Source , her Center for Earth based spirituality and healing.....in many ways I feel I'm driving "full circle" indeed. Ironic that I should read the article below just as I finish my coffee at a hotel, and prepare to visit another Shaman, one who has been very important to me, and who I haven't seen in 17 years......more on this later.  This is a summer of synchronicity, ever since I got on the road, and it's a pleasure to share here the MacGregor's insights.

When Arizona sculptor and artist Lauren Raines was going through a divorce, she heard about a shamanic practitioner in Crownsville, Maryland, who had studied with Sandra Ingerman and was also an energy healer and herbalist. She was at a point in her life when she was “very open to anything,” and went to him for a soul retrieval.


This shamanic practice helps regain a soul that has become trapped, disconnected, or lost through some sort of trauma. Depending on the circumstances, a divorce can certainly qualify as a trauma.

“He was very business-like,  and without knowing anything about me, put on his drums tape and headset, had me lie down next to him, and we tranced together. At the end of the session he blew soul fragments back into my body, and we talked about what he ‘saw.’ We talked about cutting the cords from my ex-husband and my former community (I had moved away). He concluded the session by telling me: You’ll know it’s all over when you see a magenta flower that looks like a cosmos, and a terra cotta angel.

Eight months later, Lauren crossed the country with her cat and all her possessions loaded into her van. She was determined to move back to Berkeley, California, and start a new life. She had decided she would sleep in her van if necessary until she found somewhere to live. “I began my adventure as soon as I arrived with a visit to a coffee house I last visited 20 years earlier. Almost immediately I was greeted by a long ago friend, Joji Yokoi, who recognized me, and bought me a cup of coffee, and offered me a place to stay. I didn’t have to spend a single night in my van. When I walked into his living room, there was a huge photograph of a magenta cosmos flower hanging above his fireplace!”

A few months after that, Lauren answered an ad for a roommate. “I walked into a house with an altar – and in the center was a terra cotta angel. Judy Foster was one of the founding members of Reclaiming and a colleague of my heroine, Starhawk, whose writings were the foundation of my MFA thesis more than a decade earlier. Needless to say, just like that, my new life began and I ended up working with the very people I most wanted to work with, never having had to even try! The shaman was right in his prediction.”
The shaman gave Lauren two very specific bits of information about markers that would signal her transition period was finished – the magenta cosmos flower and the terra cotta angel. How was he able to see something so precise, for a woman he had just met?

“Shamans are inspired visionaries who are able to access information through their invisible allies for the benefit of  themselves, their families, and their communities. This process is known as divination, and it is usually accomplished through ceremony and ritual,” wrote Sandra Ingerman and Hank Wesselman in Awakening to the Spirit World.  “Through their relationship with these transpersonal forces, shamans are able to retrieve lost power and restore it to its original owners…”  So through the trance state that the shaman and Lauren entered together, he was able to retrieve power that Lauren had lost and was allowed to see the most probable path her future would take.

Delighted that you reposted! The post got some intriguing comments, too. Happy travels!