"Yesterday as I watched the M.L.K. gathering on T.V., I couldn't help but wonder what Obama was feeling. Here he was lauding M.L.K.'s creed of non-violence, yet we as a country are ready to fight violence with violence and the drum beat of war grows ever louder in the distance. Talk about cognitive dissonance! As with the last two wars in the mid-east I wonder if this one is the beginning of the end.  Maybe we'll draw back at the last minute like Kennedy did with the cuban missile crisis.
We can hope. We can pray."
Valerie J. (from today's email)

As I responded to my friend Val's recent email, I questioned who "we" were.  Because I share a common bi-pedal humanity with the forces that inflict war after war on humanity, I don't believe that I, and many others, are included in the "we" when speaking of what our government is  preparing to do as once again the bombs will fly, and another war will open.  Polls show that only 9% of the population wants another war, and just like in the past, what control do we have over what our militaristic government is doing?  As Val points out, ironic indeed. I've marched against Vietnam, and against the invasion of Iraq with hundreds of thousands, and seen little happen.  As I listen to news about the alarming melting of Antartica, and write about waves of radioactivity washing into the Pacific ocean, truly global concerns, and read speeches about the non-violent actions of Martin Luthor King, whose bravery and dedication made possible the very president we have now............Why do we still have no control over the militarism of our country?

When I was in Bali years ago used to go to the Temple of Hanuman to feed the grey monkeys that lived in the forest there.  It was a common sight to see the little females struggling to forage with an infant on their breasts, and an older child hanging on for dear life to their backs.  One day I turned up with a bunch of bananas, and a very big alpha male monkey sauntered over, walking very much as a human bully would, bared his considerable teeth at me, and grabbed the whole bunch out of my hands.  I wasn't going to argue.  He sauntered away, sat down with the entire bunch, and all the rest of the monkeys gathered around, hoping he might drop something.  I remember thinking, damn, I sure hope, as a very large tribe of naked monkeys, we can evolve beyond this.

Hollywood churns out distopian movies now that are all about a ruined world, with roaming bands of warriors fighting for alpha male status - endless mythos of a "hero" fighting it out, and ending up, like that grey monkey, for a while, with all the bananas and the best females.  Until, of course, the next alpha male turns up with bigger firepower.  This is the adolescent male fantasy that absorbs virtually all "action" films, and tragically, all it can imagine for the future is endless war and competition. This is the mythos that millions of boys (and girls) now additively act out with video games, video games that will prepare them someday to push buttons that launch drone bombs to far away places, never seeing in their minds or hearts the face of the children, women, old people upon whom they will fall.   How, in any way, does this prepare us for the future we face now?

Pray indeed for our country, and for the millions of innocents who will experience our bombs along with the violent tyranny of their own country, and the thousands of American youth who will not become doctors, or parents, or artists, or gardeners, or environmental activists, but who continue to  die as soldiers.  And as they go, we will continue to watch, entranced, numb, bellowing about "revenge" or "jihad" or "freedom" as the future dies. 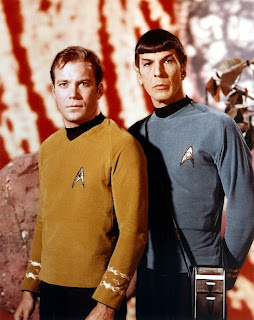 When I feel stressed, thanks to Netflix, I now escape into Star Trek.  Yes, there's a lot of fighting there, but there is also, especially in the earlier versions, a lot of hope that I no longer see in our media. Inherent in the series was the image of a noble crew and captain, and a society that sought to explore "where no one has gone before" with the Prime Directive because they left behind a world without poverty or injustice. The recent "Star Trek" movie, featuring new actors portraying younger versions of Kirk and Spock, features brilliant special effects - but nowhere is there the effort to teach some kind of morality, ethics, or human interest that was a concern in Gene Roddenberry's earlier series. It's like a video game - endless bang bang and blow 'em up.  I imagine most young people find the "moralizing" of old Star Trek shows boring indeed.

We all know now we're not going to the stars.  2001 has come and gone, and unlike the vision Kubrick had, we didn't go to the moon.  Instead we went to war, again, and then again, and again.  And we have learned very little about how to live together on, and preserve, our beloved Mother Earth.  Mostly I cry for the loss of so much that is beautiful, and I cry for the future, for our children and their children, who are not going to the stars or the moon, but rather will struggle to simply survive the debris of our  civilization, a civilization with so many wonders, so much possibility.  Here's another  email I recently received, from Ariadne:

"I'm not hopeful about the future. It's clear that this civilization will not survive the effects of climate change and the many other consequences of our pollution, overpopulation, greed and lack of empathy. Nor should patriarchal civilization survive, but it's unlikely to die without a catastrophic collapse. The survivors will be trying to scratch out an existence in a biologically depauperate world.
To me, Goddess is Nature -- the Universe and the Earth. She does not need us; we need Her. But I think the evolutionary experiment on Earth of combining large brains with testosterone has been a fairly quick flop -- managing to exist for only a quarter million years before evolving to extinction.

It's a big universe, and no doubt there are other experiments in "intelligence" under way elsewhere. Life will go on here on Earth for hundreds of millions of years after we are gone."

Should I mince my words, for fear of offending, not share the anger and despair of people like Ariadne?  We all know what individuals are capable of - we celebrate Martin Luthor King for what he accomplished, and the many who followed him to make a better and more just world. People who represented that evolution beyond patriarchy, an evolution toward cooperation.   No matter what, we must hold on to these principles, these possibilities.  I do not believe in mindless "positivity", but  I do believe in finding ways to go forward with love,  if not always hope.

I have always found it a great irony that few people realize that non-violence was fundamental to the origins of Christianity.  In fact, the theology began to change politically when Christianity became an important religion in Rome, and the army was confronted with converted soldiers who left the army because it was against their creed.  The sign of a cross, a sign representing violence and humiliation to early Christians as well as Pagan Romans, was not the symbol of early Christianity - it was a fish, representing the fisherman Peter,  a Disciple of Jesus of Nazareth and one of the founders of the early Church.  The Cross did not appear as a symbol until the later, ironic (and yet practical for Rome's army), militarization of Christianity in Rome, when Roman soldiers would paint the cross upon their shields.  So in many ways, the adaption of the Cross meant the beginning of justification of war in Christian theology.

Someone I've always admired, who has  endeavored to follow the non-violent original teachings of his Faith is former President  Jimmy Carter.

Great post, Lauren. And so true about the early star trek. Someone on our blog commented that perhaps obama has been pushed into a corner by the military-industrial complex. Strike or else: i.e., end up like JFK.

Thanks. I hope not, but one wonders if this will ever cease. We have to stop war, if we're to have a future at all. These really are the most crucial times in humanity's long history - peace and cooperation, like learning agriculture or how to read, is our next crucial evolutionary step.

Once again you have so eloquently expressed what many of us believe. I so appreciate the time and effort you take to share your insights with us.

Thanks Gail. I appreciate your encouragement! Sometimes I feel like I'm out on a limb........