Death in the "City of Isis"

"Three terrorists believed in their own minds that they were holy warriors who would die "martyred" in their holy war and that they would live on in Paradise.One of the terrorists, Cherif Kouachi ........told French investigators that "the wise leaders in Islam told him and his friends that if they die as martyrs in jihad they would go to heaven" and "that martyrs would be greeted by more than 60 virgins in a big palace in heaven." This refers to the hadith, or saying of the Prophet Mohammed, that martyrs will enjoy the favor of 72 virgins."

As I, with so many people around the world, mourn those  who died in Paris, I cannot avoid a  grim synchronicity that accompanies this latest act of  murder in the name of a "god" (and no, I will not capitalize the name of this murderous  patriarchal god, who  has had so many violent names in so many violent eras of human his-story.)
My friends in the Women's Spirituality community, the Fellowship of Isis, and women and men  concerned with mythology and archetypal psychology,  have been disturbed that ISIS, the group claiming responsibility for this latest atrocity,  has been given, ironically, the name of the great Mother Goddess of ancient Egypt (I.S.I.S.).

Isis with Her infant Horus, believed by many to be the origin of the famous Black Madonnas at pilgrimage sites throughout Europe; winged Isis who may also be the earliest "angel".   This  Mother Goddess was beloved for a millenia in Egypt.  In the later days of the Roman Empire Isis was imported to Rome,  and temples were built to Her, including those found at an outpost in Gaul named for  Her.    Many people do not know that  Paris, par Isis, once meant "city of Isis". 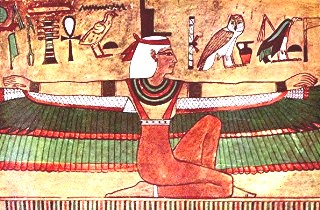 The attack on Paris by Islamic extremists who have taken, ironically, the name of this Great Goddess of the ancient world is paradoxical.  The Divine Feminine throughout world cultures is about serving and nurturing life.  These religious fanatics are about co-opting those powers to serve the subjugation of women, and  death to all  who don't "believe" in the absolute  authority of their "god" .
A further synchronicity  occurs that they chose Friday the 13th, no doubt because that day is long considered unlucky.  But  if considered from the viewpoint of  Europe before monotheism,  quite the opposite is true.  Friday the 13th was sacred to the Goddess - first, because Friday is named for the Norse Goddesses Freya/Frigga, representing love, sexuality, and child bearing, and second,  because  the number 13 has been associated with women since prehistoric times.  There are 13 lunations in a year, and 13 menstrual cycles.  Hence (not unlike  the long mythic descent of Mary Magdalene from disciple or wife  of the historical Jesus  to reformed whore)  a day once devoted to a Goddess became co-opted as  "bad luck".
I remember a conversation I shared once  with Dorit Bat Shalom, an Israeli artist I know  who brought Israeli and Palestine women together in “Peace Tents” to share their stories  in the 1990's.  Just before the invasion of Iraq, Dorit said : "How can there be  peace  without the Goddess?"  The Shekinah is the feminine aspect of God in Judaism. Dorit went on to say "The Shekinah has been driven away from the holy lands. We cannot heal without her ."
Indeed, endless strife takes place in the very heart of what was once the fertile homeland of the Great Mother, of Inanna, Astarte, Isis,  Asheroth.   The question Dorit asked stayed with me.  How indeed can there be peace, in the Mideast or elsewhere, when deity, and human values, are personified and polarized as almost exclusively male? A mythos that denies the feminine half of humanity, in Islam, Christianity, Judaism, and elsewhere......has left us a humanity divided against itself , and the more polarized the society, the greater the violence.  The male archetype carried to its ultimate extreme,  unbalanced and unmitigated,  is a killer.
The "return of the Goddess" means,  to me,   restoring Balance to the profoundly divided collective spirit of the human race.   When half the human race is disenfranchised, enslaved, hidden,  that means that half of the collective mind of humanity is split off from itself.   Whenever we pray to "Him", regardless of which patriarchal religion we are aligned with, we are inwardly  reflecting that split, right there in what we literally say is Holy/Wholly  and, by omission, what is not Holy/Wholly.  The disenfranchisement of the Divine Feminine and corresponding feminine values, taken to its greatest extreme, results in violent cultures that worship war,  and entitlements that enslave and degrade women.    Every  fascist and genocidal culture, from Nazi Germany to the Taliban,  has from its very inception taken away the rights of women,  every single one.
But so few people see how important the arising of the Goddess energy is to the psyche of humanity, and as the Dalai Lama himself pointed out in his famous comment, to preserving the world itself.   So few people can see how  much patriarchal culture has co-opted Her life-giving energies.  Perhaps this is the reason I notice such synchronicities, in the midst of such great tragedy.  This is what Clarissa Pinkola Estes called "the River beneath the River of the world", the collective Dream of humanity, the mythic language.

References:
1) "the Legend of Isis"
http://isisclinicdubai.com/?page_id=78
In ancient Egyptian mythology, Isis was the symbol of healing and the protector of children.
Often represented breast-feeding her son Horus, the legend of Egypt crossed the Mediterranean sea to influence the Phoenicians in Byblos (Jbeil), Lebanon, Greek and Roman civilizations.
Isis of Paris
As early as the 15th century AD, many Parisian historians believed that the city of Paris owed its name to the Egyptian goddess Isis. There are various manuscripts from around 1402AD at the “Bibliothèque Nationale” in Paris which contains drawings of the goddess Isis garbed as a medieval noblewoman seen arriving by boat to Paris and where she is greeted by nobles and clergymen under the caption “The very ancient Isis, goddess and queen of the Egyptians”.
In the 14th Century, Jacques Le Grant wrote: “In the days of Charlemagne (8th century AD) there was a city named Iseos, so named because of the goddess Isis who was venerated there. Now it is called Melun. Paris owes its name to the same circumstances, Parisius is said to be similar to Iseos (quasi par Iseos) because it is located on the river Seine in the same manner as Melun”.
After his return from Egypt in 1799, Napoleon was to develop a curious interest in the Egyptian goddess Isis, and eventually set up a special commission headed by the scholar Louis Petit-Radel in order to verify whether or not the claims made by Gilles Corrozet and others that Isis was the true tutelary goddess of Paris was tenable. After sometimes, Radel reported to Napoleon that the evidence he had examined supported the claim that the “Boat of Isis” was the very same as the “Boat of Paris”. Impressed by Radel’s report, Napoleon issued written instructions on the 20 January 1811 to the effect that the Egyptian goddess and her star be included on the coat-of-arms of the French capital city.

3)  Moon Goddess stone and  Yoni receptacle at heart of Mecca:

Lauren, Your post is absolutely needed after these latest outrages, and Isis's name is being taken in vain. The violence must be stopped.
Let us insist on calling this group ISIL or anything else and begin to insist that this be the way all journalists speak of them...
I wrote a letter to Michelle Obama asking her to use her influence on behalf of women everywhere -t o change the name of this group in the media and being used by our world leaders. What else can we do? You have spoken for me.

The is an uprising of women and children of the world who are making a point to be seen and heard. I believe that it is time for all of us to rise up and be heard. Your words are amazing and I posted it on my Isis Society for Inspirational Studies Page... Great words and great work.. Thank you.

Lauren, ISIS is not the name of the Egyptian goddess. ISIS stands for Islamic State of
Iraq and Syria.

Yes, ISIL would be preferable.

P.S. this is a name given by English -speaking nations, obviously not ISIL themselves.

In Australia, we call it Islamic State. I do wonder who
is the group taking the name of the goddess, called ISIS, in vein as
it seems to me, that the group itself (who is perpetuating crimes against humanity) are NOT the ones linking themselves to the goddess.

Lauren, with deep respect, you may want to reconsider how you and
your associates perceive Islamic State terrorists.

Wow. This post is powerful. Thank you for all the mythological references.

You're right, I've changed the text to reflect that the group did not call itself ISIS. I was trying to point out the underlying synchronistic event taking place..........thanks for your comments.

Well, that is what I am pointing out, Lauren: there is no
underlying synchronistic event taking place - only a thought
and a belief that there must be.