An Important Letter on Violence in America

It's not even 6 months since the "Dark Knight" massacre in Colorado, or the massacre of 12 people at a Sikh Temple in Wisconsin, and now 28 people are dead in Connecticut, 20 of them children, at the hand of another young man with an assault rifle.   And it's not quite 2 years since  the shooting of much loved Congresswoman Gabrielle Giffords and the death of 6 people, when the President gave a beautiful speech right here in Tucson.  But nothing has changed.  This is also what the "return of the Goddess" is about.

I felt like re-publishing Bill Moyers  article from this summer,  which he wrote after the deaths in Colorado.  But I also was forwarded today an important letter by Henry Lowendorf of the Greater New Haven Peace Council.  I feel like posting them both.


There is no pain like the loss of a child.

The tragedy that overtook Newtown yesterday suddenly dropped that pain on too many to count and left heartsickness in its wake. The children and the adults who tried to protect them have become waves of memories crashing inside of us. Our thoughts and prayers go to those so closely devastated with grief, a grief even shared around the world.

As we, collectively, try to bear the unbearable, as we pick ourselves up to live on, to cope, and to look for means to prevent such future tragedies we must not be nearsighted in investigating the causes.

This is not the first case of a mass killing in our schools. It is not the sole case of mass killing of children, for in nearby New Haven and Hartford that many children are shot and killed on the streets throughout every year. Because their lives are not taken in a short span of time, public attention is limited, directed elsewhere, and the shock and sorrow do not circle very far. Because they are mostly children of color, for many in the majority white population they are someone else’s children.

Do we pause even for a moment when we read - do we even read? - stories of Afghan children, Iraqi children, Palestinian children, Congolese children, thousands of whose lives are brutally taken in lands battered by war? They are so far away. Why are these other children deserving less of our concern? Are they really unrelated to our current tragedy? What we witness at this moment are the effects of a brief war zone, one regrettably close to home.

Let us remember a similarly painful tragedy in 2001 on September 11. Inexcusably, it did not lead to introspection about the cause and thoughtful efforts aimed at addressing and removing it. Rather what ensued was a violent reaction named “shock and awe” whose erroneous goals led to the deaths of tens of thousands of Afghans, hundreds of thousands of Iraqis, mostly noncombatants, little children whose lives were totally disconnected with 9/11 and thousands of our own precious children in avoidable wars. Those lucky enough to survive have been traumatized for life.

It is not enough to question the availability of guns and gun ownership policies in the United States. For we live in an economy of violence that goes far beyond handguns. Our nation spends over a trillion dollars a year on building killing machines and actively using them, more than all other countries combined. Our nation maintains an arsenal of nuclear weapons that can instantaneously end the lives of all children and all civilization. Our nation recruits our youth, whom we parents have taught to cherish life, and teaches them to kill. Our nation buys billions of dollars of weaponry and sells millions worth of armaments at home and abroad, sales that fill the coffers of the manufacturers of killing machines, sales that bind us to the unnecessary, premature deaths of our global brothers and sisters.

We live in a culture of violence. On Independence Day 1852, Frederick Douglass called out the great “shocking and bloody” violence of our nation. Martin Luther King, Jr., 45 years ago, a year before being assassinated spoke, “A nation that continues year after year to spend more money on military defense than on programs of social uplift is approaching spiritual death.”

We must address the “shocking and bloody” tragedy in Newtown, and so many other tragedies like it, as the result of “spiritual death.” We must aim a keen eye to reach spiritual uplift. For only if we accept the responsibility to look beyond the heart of a grieving nation and seek out a fundamental flaw, only as we are willing to seek a higher truth and root out the culture of violence and an economy that feeds on it will we have reason to expect to see all of our children, here and there and there, live long and happy lives. As it should be. Only then.

In Sorrow, Peace and Justice 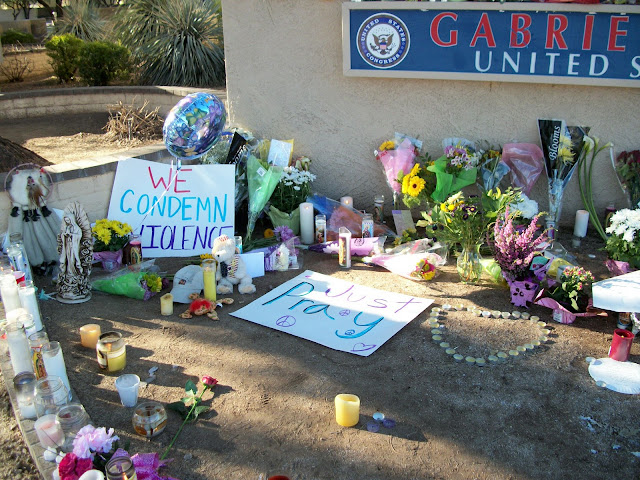 The United States has emerged to become the most violent nation on earth where millions are equipped with lethal weapons to massacre brutally as many people as they wish. In spite of its military might, the US government cannot do anything about it since it functions under the ruthless thumb of the National Rifle Association (NRA) whose sole objective is to boost by all means the business of the weapons’ industry.

You might think Wayne LaPierre, Executive Vice President of and spokesman for the mighty American gun lobby, The National Rifle Association, has an almost cosmic sense of timing. In 2007, at the NRA’s annual convention in St. Louis, he warned the crowd that, "Today, there is not one firearm owner whose freedom is secure."Two days later, a young man opened fire on the campus of Virginia Tech, killing 32 students, staff and teachers. Just last week LaPierre showed up at the United Nations Conference on the Arms Trade Treaty here in New York and spoke out against what he called "Anti-freedom policies that disregard American citizens' right to self-defense." Now at least 12 are dead in Aurora, Colorado, gunned down by a mad man at a showing of the new Batman movie filled with make-believe violence. One of the guns the shooter used was an AK-47-type assault weapon that was banned in 1994. The National Rifle Association saw to it that the ban expired in 2004. The NRA is the best friend a killer's instinct ever had.

Obviously, LaPierre's timing isn’t cosmic, just coincidental; as Shakespeare famously wrote, "The fault is not in our stars, but in ourselves." In other words, people. People with guns. There are an estimated 300 million guns in the United States, one in four adult Americans owns at least one and most of them are men. The British newspaper The Guardian, reminds us that over the last 30 years, "The number of states with a law that automatically approves licenses to carry concealed weapons provided an applicant clears a criminal background check has risen from eight to 38."
Every year there are 30,000 gun deaths and 300,000 gun-related assaults in the U.S. Firearm violence may cost our country as much as $100 billion a year.

Toys are regulated with greater care and safety concerns. So why do we always act so surprised? Violence is alter ego, wired into our Stone Age brains, so intrinsic its toxic eruptions no longer shock, except momentarily when we hear of a mass shooting like this latest in Colorado. But this, too, will pass and the nation of the short attention span quickly finds the next thing to divert us from the hard realities of America in 2012.

Reliance on Arms Leads to Self-Annihilation

We are after all a country which began with the forced subjugation into slavery of millions of Africans and the reliance on arms against Native Americans for its Westward expansion. In truth, more settlers traveling the Oregon Trail died from accidental, self-inflicted gunshots wounds than Indian attacks - we were not only bloodthirsty but also inept.

Nonetheless, we have become so gun loving, so blasé about home-grown violence that in my lifetime alone, far more Americans have been casualties of domestic gunfire than have died in all our wars combined. In Arizona last year, just days after the Gabby Giffords shooting, sales of the weapon used in the slaughter - a 9 millimeter Glock semi-automatic pistol - doubled.

We are fooling ourselves. That the law could allow even an inflamed lunatic to easily acquire murderous weapons and not expect murderous consequences. Fooling ourselves that the second amendment’s guarantee of a "well-regulated militia" be construed as a God-given right to purchase and own just about any weapon of destruction you like. That's a license for murder and mayhem and it's a great fraud that has entered our history.

There's a video of which I'd like to remind you. You can see it on YouTube. In it, Adam Gadahn, an American born member of al Qaeda, the first U.S. citizen charged with treason since 1952, urges terrorists to carry out attacks on the United States. Right before your eyes he says: "America is absolutely awash with easily obtainable firearms. You can go down to a gun show at the local convention center and come away with a fully automatic assault rifle, without a background check, and most likely, without having to show an identification card. So what are you waiting for?"

The killer in Colorado waited only for an opportunity, and there you have it - the arsenal of democracy transformed into the arsenal of death and the NRA - the NRA is the enabler of death - paranoid, delusional, and as venomous as a scorpion. With the weak-kneed acquiescence of our politicians, the National Rifle Association has turned the Second Amendment of the Constitution into a cruel hoax, a cruel and deadly hoax.

Glad you reposted this. Something of a synchro here. Just as I came to your site, got a ding on my phone, looked at it - and saw you had just message a comment on our blog.

that's spider woman for you bringing in the new paradigm!

I've been thinking so much about how indignant we are - AND SHOULD BE - about the deaths of these children, but that we are perpetrators of children's deaths as "collatoral damage" around the world. I remember recently seeing a photo posted online of a number of small children lying dead after the recent bombings in Israel/Palestine. A father was kissing the forehead of his young, dead child - heartwrenching. But when it happens here, to us, it is an outrageous, haneous, horrible act. And it IS, it always is. Oh there is so much to say. But... thanks for these, both good articles.

I agree, Valerianna. All things are connected, and until we truly educate empathy instead of power over, until we evolve beyond a culture of violence......

But we are not alone in this.