Numina - Masks for the Elemental Powers from laurenraine

Back in July I wrote of having a "hot springs satori" while ernestly asking the universe, in a hot pool alone at midnight on the 4th of July in a little town called Safford, Arizona....what the Universe thought I should do next.  I have just "retired", and feel sometimes like I'm being put out to pasture, and have a terror that my imminent fate is some kind of elderly senile purgatory with the golf cart crowd.

Bearing these fatalistic thoughts in mind, I didn't really expect an answer from the Universe.  But a few dips later - wham! -  a very well organized academic paper of a project titled "Numinous" popped into my mind, in three distinct components, and nicely typed on a Word document!  Not the romantic, visionary experience I used to have under similar circumstances.  But there is was, an Answer.  Which I wrote down, dripping, on some soggy paper.

This kind of thing has happened to me before, although in a much more poetic manner. In fact, I believe that when we engage in true creativity, and when we enter the "realm of the Goddesses/Gods", we enter a seamless realm that is liminal, collective, and sacred.  But this time I guess my guides have decided its time for me to become more organized.

I remember a vivid dream I had  in 1998 at Harbin Hot Springs about being given an antique typewriter that was buried in the ground.  As I dusted the dirt off of it it began to type by itself, spewing forth pages and pages of stories about Goddesses. Then the pages turned into pictures, and the pictures turned into a long line of women, dressed in beautiful costumes.  Women of all colors, black, blue, white, red, and yellow, stood before me like a luminous, expectant  rainbow.  Not long after I returned to my studio in Berkeley, I was invited to attend  a meeting to plan the upcoming Spiral Dance in San Francisco. That year the theme was diversity, and the group wanted masks to celebrate the Goddess.  And so I began work that summer on a series of  masks.  At the  Spiral Dance that October my dream came true.  Twenty-five women in a rainbow of colors formed a masked procession.  The dream proceeded the creation and the event.....

I realize now  that "Numina" is similar to what I was proposing with Macha Nightmare for my Kickstarter project last year (unfortunately it failed).   I thought that failure meant that  was done and over, an idea whose time came, and then went.........but surprise!  The masks I had made  were in Marin with Macha, and another colleague, Ann, volunteered to pick them up, to be returned to me when I come to California for a conference in February.  Somewhere along the way, Ann and Mana and Diane, all colleagues who have created rituals and performances with the previous "Masks of the Goddess" collection in the past, decided to create a Solstice event, and then something in March in Willits, California.

So it wasn't over, and inspired, I've been  making new masks.  In fact, they keep arising in my mind, leering at me from the other side of Manifestation, saying "make me, make me!".  I have to trust that there are Dancers, and Stories, also currently behind the Veil, for whom they wish to become manifest.............most recently I added "Dawn", "Drought", "The River Face", "Ocean", and "Tree" to the evolving collection.  Now I'm working on one called "Gather and Offer", "Desolation", "Shadows of our Forgotten Ancestors", and "Rainbow Woman".

And much magic and synchronicity has begun to occur, which tells me I'm somehow on the right track.  I want to write about this in future posts, but for now take pleasure in sharing the little slide show about the evolving project above.

Here's what I scratched on to a piece of damp paper.........and I reflect that  it's also a variation on what I've always done since the day I first walked into a stone chamber with a ley crossing in Putney, Vermont, in the summer of  1982, thanks to master dowser Sig Lonegren.  I felt vibrant energy there, I watched my divining rod "helicopter", and I've been asking myself ever since:  "How do we speak to the Earth?  How does the Earth speak to us?" So I make masks, because that's what my particular gift or "offering" is,  with the hope that, finding them useful, we'll receive an answer.

One last thought for myself, since it is the beginning of the 5th World, not to mention New Year 2013 - why do this at all?  Because I believe there is so much wisdom we have lost, that needs to be re-invented for our time, among that "re-discovered, re-invented" lost wisdom, the use of sacred masks, and reverence for a "conversational world", for the many faces of Gaia.  Whether that conversation occurs with a tree, or the great Goddess Pele, or the magic of a sudden butterfly, I do believe that once one has experienced it, one will never be the same.

Component 1)  Masks.  In traditional societies masks are "Liminal Tools".  Traditionally they were perceived as being mediation tools between shamanic states, or different dimensions of being.  A mask might allow spirits to participate, communicate, even prophesize and heal.  They can be seen in this respect as a way to permit "numina" or the spirits of place to to communicate through the medium of the mask, and the one who wears the mask.

Component 2) Story.   What might the spirit of a place, the "genius loci"  say?  How would "place" speak to participants?  Perhaps, though visioning exercises, art process, meditation, creating handmade books, masks, or shrines that "engage, invoke and invite the numinous" to "speak"?

Component 3) Vision. How might Numina, Spirit of Place or Elemental Powers,  be  "personified" or "voiced"  in contemporary terms, even as they are now "dis-placed"? 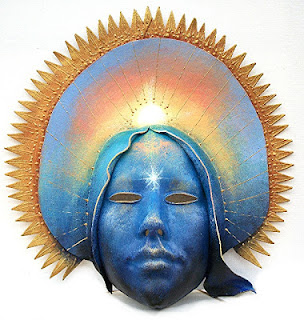 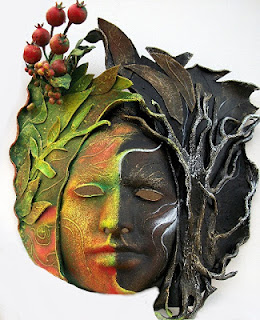 NUMINA/NUMEN:  What They meant to the Romans


"If ever you have come upon a grove that is thick with ancient trees which rise far above their usual height and block the view of the sky with their cover of intertwining branches, then the loftiness of the forest and the seclusion of the place and the wonder of the unbroken shade in the midst of open space will create in you a feeling of a divine presence." [1]

The Romans believed nature was inhabited by elemental forces they called Numina, and many Roman sites  had little shrines dedicated to  the "genius loci" of a particular place.  Being in a reciprocal  relationship with the Numina was important to the health, prosperity, and spiritual well-being of all who lived in any landscape.   How can we regain this sense of  “communion with place” - the healing springs,  mysterious forests, or  generous orchards -  that are the true wellsprings of myth?  Myth making has always been a way for human beings to become intimate with the world.  In the past  "Nature" was not just a "backdrop" or a "resource" – nature was a conversation.  Our experience changes when environment  becomes "you" instead of "it".

Among the Hopi of Arizona honoring and being in balance with the Katchinas that preside over many aspects of their beloved land,  and bringing them “to earth” with sacred masks and ceremonial dances,  is believed to be essential to their survival.  Masks thus to most indigenous peoples are a liminal, transformation tool, a means for different dimensions of being to interact, communicate, bless and inform.

Most of us cannot live as early Romans, or indigenous people,  but we can re-invent a “mythic dialogue” with the  environment through storytelling, ritual, and with  masks.   My  evolving collection of  "Numina Masks" invite others to “give voice” through prose, dance, and theatre to the numinous intelligence and unique qualities of where we live, to “put on” the elemental forces of nature as they are personified in myth, both ancient and new.  Especially as we face climate change and environmental degredation: what might Pachamama, Earth Mother of South America,  say?  Or the “Spirit of the Redwoods”?  Or the great volcano Kilahua?

"A numen (plural: numina) is a sacred force, an impersonal but divine power. The gods have their numina as their divine power, but the gods themselves have been considered numina. The "divine presence" to which Plinius Caecilius refers is called a "numen."

"In Roman literature we find that a numen is something 'of the Gods' dependent on the Gods, and not something that is either separate or prior to the Gods......The easiest way I have found to explain a numen is this. When you sit down in a chair and you feel the warmth of a person who has there before you, you sense his energy, his power, his presence having been there. In the same way, when a God or a Goddess have visited a place, Their presence radiates out into that grove, or that pool, energizing it such that it is more lush than the surrounding area, teeming with life, and filled with a certain presence that you can intuit and feel."

"Working alongside and in harmony with a numen benefits a person by making his tasks easier and in accord with the Gods. Horace says that "By Jupiter's benign numina are the shrewd guided in his care and defended."[2] And Servius warns that those who act contrary to the numen of a God act against the will of the Gods and can only expect failure.......Or as Livy put it, "You discover that all events turn out well when we follow the Gods in obedience, and ill when we spurn Them."[4]

"It is not a supernatural power in the sense of divine will overcoming the principles of the cosmos, but a power imbued in nature by the Gods to maintain the natural order of the cosmos. The providence of Ceres is to bear fruit (geres) from the earth and to create a regeneration of life (creare). It is through Her numina that She effects plants to germinate and grow. In a period of mourning for the loss of Her daughter Proserpina, Ceres may temporarily withhold Her numina and cause a barren winter to set in. But She cannot alter the natural order of the earth, nor of a seed to germinate, nor can She alter Her own numina into something different than what it is. She does not make the winter to come by exercising a numen of barrenness that is alien to Her own nature. In that same myth, none of the other Gods and Goddesses can bring about a return of spring. Their powers cannot effect that which the numina of Ceres alone may do. The numina of each God and Goddess are therefore a special power, unique to each of Them alone and not a general divine power that is diffused among the various deities. "

"In practical terms, whenever one invokes the aid of a God or Goddess, what is asked is that the deity will project His or Her special numen so that whatever task is to be attempted shall succeed in accordance with the Gods. The two most basic prayers in the religio Romana are Do ut das, "I give so that You may give," and the formula: bonas preces precor, ut sis volens propitius, "I pray good prayers in order that You may willingly be propitious." (Reciprocity)"

Looking forward to another year of joy following your spiritual path.

Thank you Gail.......I always so appreciate your observations and encouragement.

Your creativity is a continent unto itself. Love your take on numina and as always, the masks are superb!