This morning I walked into my usual early morning coffee shop in Tucson. It is pleasantly arranged, open early, and the only coffee shop in all of Tucson I've found that doesn't blast loud music (and I don't mean the Brandenburg Concertos) at you.

Almost everyone sat behind a laptop, well bulwarked against the world. Many had earplugs as well, just to be sure that nothing external interfered with cyberspace intimacy. As usual, I had my sentimental, grouchy moment of remembering mystical days at Cafe Trieste, espresso machines steaming, poets sitting with books in hand, transparently open to conversation with anyone who cared to ask what the book was about. You kind of went to a coffee shop to meet people, or at least, be surrounded with the hum of noisy, eccentric humanity. I romanticize those days, no doubt, and they seem as ancient as bell bottoms. Books can be transparent......but a laptop is impregnable.

I pull out my laptop, and here I am. Where else is there to go? 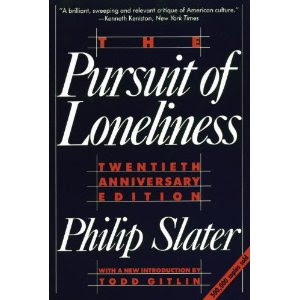 Ironically, I have in my bag a copy of Philip Slater's The Pursuit of Loneliness - American Culture at the Breaking Point (First publication 1970, Beacon Press) - I started re-reading it last night. This classic indictment of America's "cult of individualism and isolationism" is, if anything, more relevant now than it was in the 1970's when it was first published. I pulled out the book because, of all things, I was thinking about a proposal for a talk at the next Pagan Studies Conference on community.

In Slater's famous book, he argues that the desire for community is frustrated by the cultural emphasis on individualism and competition, to which our self-perpetuating materialist emphasis contributes. We are preoccupied with insulating ourselves from each other as much as possible, Slater maintains, our technology continually enhancing this "shadow" side of the collective mind. The desire for engagement is further frustrated by the irrational American belief in "independence". Looking through one of his blogs, which shares many excerpts from his new book, THE CHRYSALIS EFFECT, I was pleased to see that he has lost none of his fire:

"We live in a world today in which the problems we face are all planetary. Where hiding behind national boundaries is ultimately suicidal. A world in which conventional warfare -- army vs. army in pitched battle -- exists only in the movies, TV, and video games............Making boys macho today is condemning them to irrelevance." .....from the Huffington Post 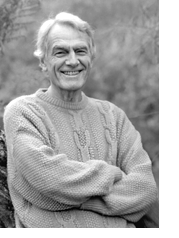 As my mother's caretaker these days, I've spent a lot of time watching television with her. It's hard not to become engaged when you're a captive audience; perhaps, as a student of mythology, it's hard not to contemplate this contemporary myth making. I was thinking about why I find the "reality shows" so appalling. Take "Survivor": Put a lot of people on a desert island with few resources, and test their survival skills by making them compete with each other. Now, that is a helpful strategy, should the real thing ever happen. Or "The Biggest Loser": Take a lot of people who are literally eating themselves to death from loneliness, and give them something they deeply long for - a community of kindred souls with a difficult, shared goal. Then make them compete with each other until only one is left.

Or how about the popular sci-fi shows, "Lost" or "Battlestar Galactica"? Whether fleeing the Cyclons as the last remnants of humanity or crashed on a mysterious desert island, none of these characters seem to be able to cooperate with, or trust, each other for any longer than between commercial breaks. There certainly, unlike the hopeful years of Star Trek, is no "ships counsellor" to help them communicate with each other. In the first Battlestar Galactica, Lorne Greene and crew were less complicated, but they were certainly noble, and you knew they'd eventually win; with this bunch of characters, I found myself beginning to root for the cyclons. At least they seemed to have the cooperation skill necessary to rebuild a civilization.

So before I continue down this depressing road to far, I was delighted to see that Mr. Slater (who teaches at the California College of Integral Studies) has written a new and hopeful book called "The Crysalis Effect". I'm ordering it today. It's described as:

The Chrysalis Effect shows that the polarization and chaos we see in the world today are the effect of a global cultural metamorphosis, one that has accelerated so rapidly in recent decades as to provoke fierce resistance. The changes that have taken place in the last fifty years – the feminist movement, minority movements, the spread of democracy, the global economy, the revolutions in physics and biology, the peace movement, the sexual revolution – are all part of this cultural transformation. Contrary to popular opinion, the polarization this metamorphosis engenders is not a struggle between Left and Right, or between the West and Islam, but one taking place within the Left, within the Right, within the West, within Islam, within every individual and every institution.

Our world is in the middle of an adaptive process, moving convulsively toward a cultural ethos more appropriate to a species living in a shrinking world and in danger of destroying its habitat.
Today we’re caught in the middle of this disturbing transformation —a metamorphosis that creates confusion over values, loss of ethical certainty, and a bewildering lack of consensus about almost everything.

The Chrysalis Effect provides an answer to the question: Why is the world in such a mess?


I look forward to getting my copy! 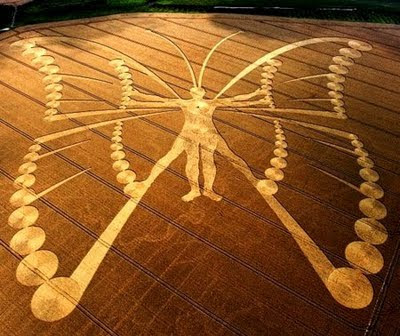 Giant "crop circle" in the Netherlands, summer of 2009.
A hopeful thought, whether from Space, or closer to home!
Posted by Lauren Raine at 5:55 AM

OOOO...I'm getting one, too. I've been feeling like I am in the "imaginal soup" stage once again inside the chrysalis, and, of course, so is the macrocosm. I look forward to reading what he has to say, thanks!

hey, don't we all feel that way? These truly are "interesting times" to be born in I think.........I was so happy to re-aquaint myself with Mr. Slater.

One more book to add to the list.
Loved this post, Lauren. But about Lost. We watched it from day 1, season 1. What I saw in this series was how people react in the midst of the unknowable, the truly mysterious, how their humanity - and their darkness - comes into play. I learned a lot about story telling from this series - what not to do, what to do, how to interweave.

Thanks to the MacGregors for your comment......yes, I also found Lost engaging, and probably have a rather predjudiced view of things. Some mornings I think I wake up grouchy!

Thanks for posting this! I am excited about reading it.

You truly open my mind and my eyes! Thankyou