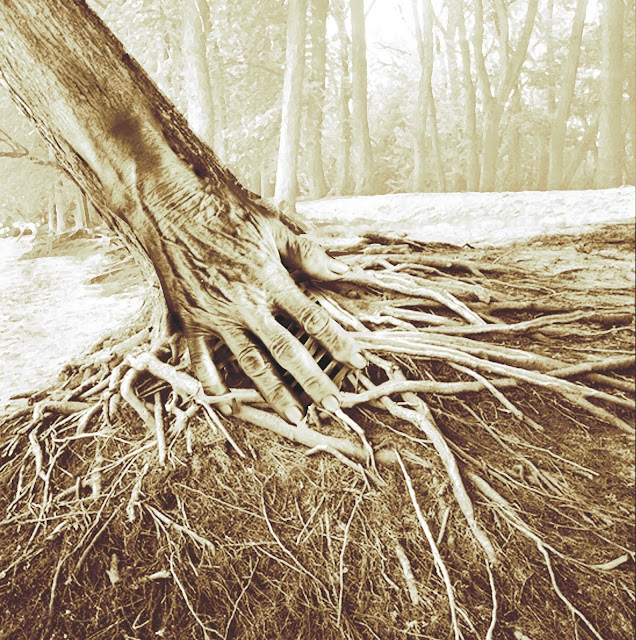 16 million tons of rain are falling every second on the planet,

an ocean perpetually falling and every drop is your body

every motion, every feather, every thought is your body

every leaf, every river, every animal your body

every creature trapped in the gears of corporate nightmares

every species made extinct was once your body

If anyone asked me what my theology was, I think I would have to say it is Gaia-ism. Since the first time I read about James Lovelock's Gaia Hypothesis (with collaborator Lynn Margulis).
Encountering a proposal that said, in essence, that the planet we live within is alive, I felt affirmed in something I intuitively sensed since childhood. That the whole world was alive, conscious in some amazing way, responsive, conversant. With their revolutionary work, the Gaia Hypostheis (now, more generally accepted, it has been called the Gaia Theory), a name was chosen from both science, and mythology. My paradigm, as they say, shifted like the Teutonic plates, and I've been seeing the world I live in through that lens ever since. My notion of God ceased to be not only male, but human-centric, and my art sprouted roots, vines, and webs in every background, always going "off the picture plane". 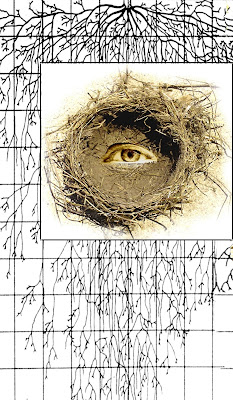 Sometimes a book, or an event, is the beginning footprint of a lifelong "Marga", the hunt for divine purpose or meaning. Gaia Theory set me to wondering about the mythos of "Gaia", the Great Mother, as well. I learned about the work of archaeologist Marija Gimbutas in her excavations of prehistoric Europe, and I read "When God Was a Woman" by Merlin Stone. I read Joseph Campbell (The Way of the Animal Powers), Riane Eisler (The Chalice and the Blade), and later, as a graduate student in the arts looking for the "roots" of the Goddess in visual history, Gloria Orenstein (The Re-Flowering of the Goddess), Elinor Gadon (The Once and Future Goddess) and many others. I found I was not alone in my quest to uncover earlier perceptions of deity, my fascination with the idea that to ancient peoples the Earth was a Great Mother with many children, to imagine worlds where where deities like Crow and Turtle, the lion headed goddess Sekhment or the generous Roman Numina of place had something to teach and tell.

Prehistoric Mississippian "Hand and Eye" gorget
The eye and hand  fascinates me and has occured in my art process numerous times.   We can integrate symbols into our being so deeply that we forget where they come from, they are simply a way we speak to ourselves about the world. The hand of the Great Spinner and Weaver, the hand of Spider Woman, the hand of Gaia. Within my own hand, as I create my life, if I'm lucky enough to contact that divine essence. 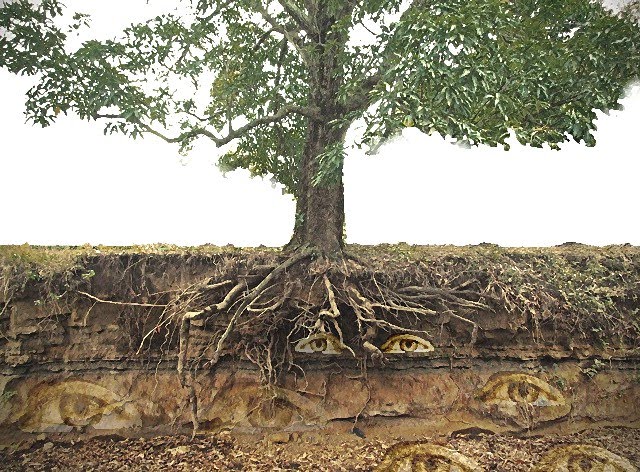 As I work on my "Icons for the Earth", I see the Eye represents the intelligence, awake and aware and creative, within what we so blithely call "nature", as if we were somehow not part of it, as it "nature" was something "out there". 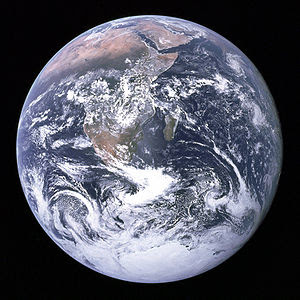 The eye keeps re-occurring, and is the spirit of place I have so often felt in the mystery of the woods, the dapple of shadow on water, the bones of lives abandoned in the desert heat. I felt it without words when I was a child, observing a lizard that was also observing me. The Eye is the world awake and
aware, the conversation
I think this has been a prologue to something. I was inspired by the talk on Crop Circles I enjoyed in Roswell, by Freddy Silva, an Englishman who has spent many years researching the Crop Circle phenomenon in his native country, and around the world. He has found that they have unique magnetic and energetic properties, that they are increasingly complex, they can occur unnoticed within as short a period as 20 minutes, and that they often occur near prehistoric sacred sites and standing stones, places of "energetic power" where ley lines cross and underground water domes occur, etc. Freddy believes they are not only communicating through the universal language of symbol and mandala (a symbol of wholeness), but they are also, speaking in terms of subtle energies, changing the land and water in some
way - perhaps, an infusion, a "pollination".
I need to learn more about this..............as an artist, they are not only mysterious, but stunningly beautiful, Mandalas that incorporate sacred symbols drawn from all human cultures. 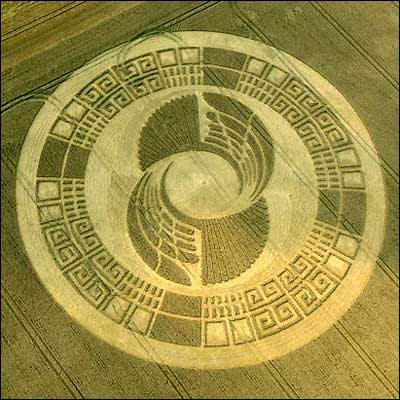 So, I'll meander with this, because this is a mystery, serpentine by nature, as all "earth mysteries" are. What I remembered as I was listening to Freddy's lecture was an experience I had many years ago, something I always wanted to share, but didn't know how to, or what it meant.** I have had a few real visions in my life. By that I mean, I was not asleep, I wasn't dreaming, I experienced an "altered state of consciousness" that was lucid and visionary. When this occurs, I consider it big, something I've been graced with. One of the most extraordinary "visions" occurred in the spring of 1989, when I pulled off the interstate at a rest area near the Blue Ridge mountains of Virginia. At the time, I owned a little red Toyota truck. I shut my eyes, and immediately found myself in the back of my truck.....which much to my surprise, began to fly! Looking tentatively over the side of the truck, Virginia was gone, and I seemed to be flying above a misty, very green landscape with rolling hills. Below me I could see a circle of standing stones. They were really more like a kind of spiral that culminated in a circle. Up the hill came a procession of people, most clad in white clothing, and many carrying flowers and baskets; they seemed to be preparing for a ceremony of some kind. 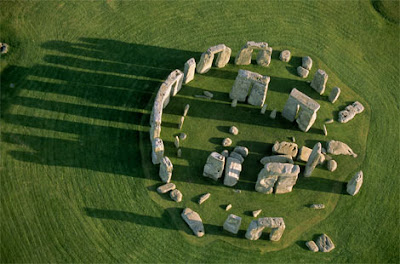 Then I was peering down at an entirely different kind of landscape, as my magical truck transported me to a Southwestern terrain. The red earth had bluffs and mesas, and as I looked, I could see that there were many, many layers of petroglyphs within the rocks - they seemed to recede infinately into both human and natural patterns. 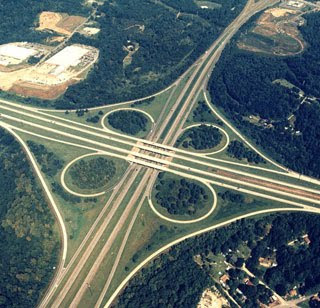 Then I was flying high over Los Angeles, where I grew up! Below me was a familiar, vast pattern of freeways - and as I watched, they formed the "figure 8" infinity sign. And then I opened my eyes, seated at the wheel, pulled over at a rest area, with a map on the seat next to me. The whole experience was too vivid to have been a dream, nor did I have any memory of being "sleepy" before it happened. What does it mean? I don't really know, even now, but seeing those crop circles, I remembered this vision, and thought of it's message of pattern, language, deep within the processes of the earth, the speaking, dreaming earth. Deep within the past, universal human language and ritual and art, deep within us even in our contemporay world. I still find this vision somehow encouraging. We stand on the razor's edge, poised for global community and maturation as a species, as well as in dire danger. To me, the freeways that formed an infinity symbol across the land could mean that, even in our ignorance and hubris, the mind of Gaia still speaks beneath and through the works of our hands and minds - there is a larger pattern, an evolution we participate within. The pattern, the template, Earthmind. *** 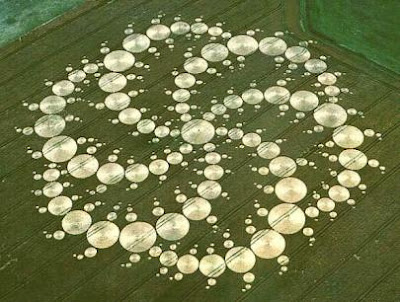 *** EARTHMIND: Communicating With the Living World of Gaia is a book by John Steele, Paul Deveraux, and David Kubrin (1989) that I highly recommend. It was another one of those "paradigm shifters" for me. **There is so much I have said in the past about the shamanic function, the visionary function, of art - something we so little understand, and yet is basic to the understanding of archaic and indigenous cultures.
Posted by Lauren Raine at 7:38 AM

I, too, am drawn to crop circles... I recently watched a short film about them at cropcircircleclay.com - I'm coveting a couple latte mugs from this potter with crop circles and personalized with my words like - dream, imagine, create...etc.

Amazing vision story... its all such a grand mystery!
And lovely eye work... wonderful.

A week ago, I wrote a post on my own blog about some coincidences involving Macondo:
http://weavingandmagic.blogspot.com/2010/07/macondo.html

The name comes from a book about gypsy magic.

In the story, Macondo is swept away by 'four years of continual rain'.

And then I saw this reference to '16 million tons of rain' in the first line of your post.

Completely independently, just yesterday, someone mailed me suggesting I might be interested in a Japanese Anime film called 'Wolfs Rain'.

'It focuses on the journey of four lone wolves who cross paths while following the scent of the Lunar Flowers. They form a pack and decide to seek out the Flower Maiden in order to open the way to Paradise.'

I might say that I find these images of Stonehenge quite fascinating. There's something about them, that I haven't put my finger on. But I'm thinking about it!

thanks for your comments! I'll enjoy reading your links, Robur.

Love the post. Crop circles are just fascinating! And thank you for the story about the pliers! What an odd synchro/spirit contact.

Lauren, you are my voice. I found this blog because Grandmother Spider gifted me with Her wisdom and now I thank her for gifting me with You! I have also researched and honored the Goddess for many years. Finding and doing ritual with an Earth based Spirituality group has brought me great peace and joy. As a mother and grandmother still deeply involved with time consuming practical matters of day to day 'living,' your voice transcends, lifting me to a higher spiritual level and helps me remember. Blessed Be!!!