Syncronicity and the Butterfly Man 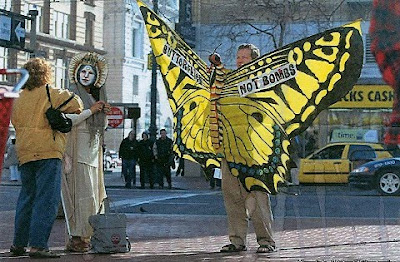 In the process of researching something, I ran across these photos from 2003 in my file, and felt like quickly sharing this lovely synchronicity story before I forget it.

I used to be friends with the inspired, visionary, and very eccentric, founder of the Butterfly Gardener's Association in California, Alan Moore. Alan is the one who got me so interested in Butterfly syncronicities, which seem to be a world-wide phenomenon, and we shared a number of events together, including marching together in San Francisco against the war in 2003 (there were 300,000 people in the streets, just like I remember it was in 1970, when I marched against Vietnam. An amazing thing to see, if sad to see it repeated. And Alan, I, and his lady friend, Nicole, were fortunate to be right at the very front of the march. Once again, with 30 years between, I heard Joan Baez sing. )

I wore the Mask of Sophia, Goddess of Wisdom, whose emblem is the dove. Alan brought his "Butterflies not Bombs" banner. The picture above was from the San Francisco Chronicle, where we appeared with our "Icons". What makes this a synchronicity is that Nicole (with her back turned to the camera) was locally famous as well for her "Cosmic Cash", which she created and passed out to everyone wherever she went. It says "One Love, One World" on the other side.

Notice the "cash" sign on the right of the photo at top? I think Nicole's "Icon" was in the Peace News that day as well.
Posted by Lauren Raine at 12:13 PM

I remember those marches against Vietnam. How little has changed, but so much time has gone by. Terrific post. Love the butterfly guy.

Your's is the first 'favorite' I pull up when I am away from the computer for a few days. You have led the life I would have loved to have participated in. I am blessed to be living and 'reliving' it vicariously through your blog. Thanks, Gail

Thanks to you both.........you keep me writing with your encouragement! Alan the Butterfly Man is a character all right........

I am in fact the daughter of the butterfly man. He is indeed a character!