"Sedna" and a syncronicity 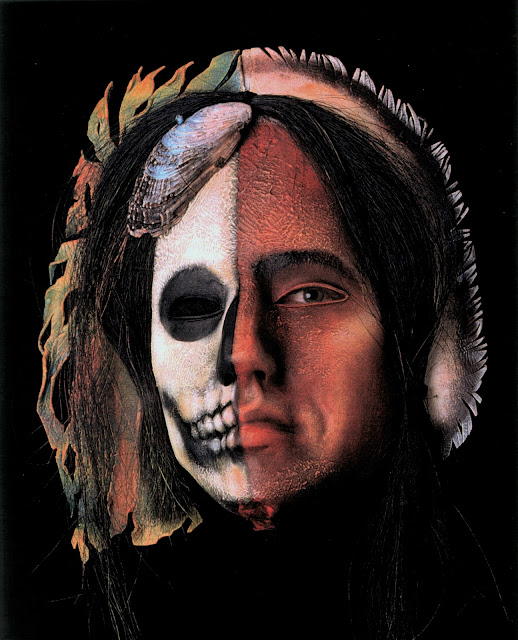 "In the archaic universe all things are signs and signatures of each other. Inscribed in the hologram, to be divined subtly."

Every time I sit down to write, I always feel like it entails constructing articles complete with footnotes and addendum.......which is one of the reasons my articles have been not very inventive or prolific lately. Having said that, I'm going to loosen up, maybe make a few subjective statements and meandering surmises, and stop feeling I have to write as if I was defending my ideas at a podium.

Currently I belong to an online group that meets once a month to share and discuss synchronicities, or meaningful coincidences.  Because of that, I've been wanting to collate or review some of the many synchronicities I archived in this Blog.  Below is one from 2012 that involved a good friend of mine, the sculptor Georgia Stacy who lives in Nogal, New Mexico.

In 2009 I sent out an email about an article to be published in   Coreopsis : A Journal of Myth and Theatre    for their Summer/Autumn Issue of 2009.  The theme for that edition was  ironically themed "Mask, Mirror, and Muse".  My article was about my ritual theatre event/performance at the former Muse Community Arts Center:  "Restoring the Balance: the Mask of Sedna" .

I'm proud of that article. Restoring the Balance was the last event I personally directed using the Masks of the Goddess collection, although they did travel to other producers.  It was also an event wholly infused with, for lack of a better word, a kind of numinous presence, and synchronicities abounded in it's production.  I even found myself after the event with spirit photographs!

I have always felt I had a responsibility to document and share the stories participants created, told, or re-told with the masks.  Not just the ever-evolving myths themselves, such as the "Story of Sedna", Inuit Mother Goddess of the Ocean,  but also the stories of the rituals, the performances, the insights that arose for those who were involved in the productions.  In the hope that those archives may inspire others to carry on the work.  These were collective re-mythings: prayers and celebrations of the multi-cultural Divine Feminine through the medium of story, performed within the liminal landscapes of ritual, theatre and sacred space.

As members of the neo-pagan Collective Reclaiming used to say when a Circle was cast for ritual work:

To be "between the worlds" is to be in that zone between the secular and the sacred, a circular "wholly" place that is fertile and imaginally fluid. ("Imaginal cells" is the actual scientific term for the cells that are responsible for transforming a caterpillar, immersed in its chrysalis, into a butterfly. They are alchemic agents of biological change.)

"I think many artists feel they are weaving some form of energy into their work. It's what psychometrists see when they "read" objects. There is an aesthetic psychometry each person does as they look at a work of art. Artworks are like batteries - if we're receptive, they can charge us. My idea of reality is that there are many, many interpenetrating dimensions." .....Alex Grey

"What happens between the worlds", fashioned with individual and collective intention, occuring with or without the form of conscious ritual or pilgrimage,  is a generative place, ripe with syncronicities, because therein the  boundaries lessen.

So, what this is leading to is an email I received, after forwarding my article about the Myth of Sedna, to Georgia in New Mexico. Recently, Georgia has begun to include whale flukes instead of wings in her wood sculptures. Here's a new piece from that series and an email she sent me back. 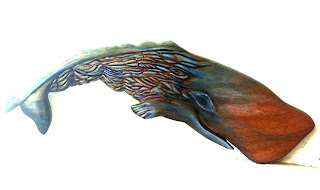 Lauren, This is more than a coincidence. I was reading the "Inuit Imagination". When I came to the sculpture carved for Sedna, with a whale fluke, I cried for the second time. I cried the first time I heard the story, many years ago. But, the clincher...right before I turned on the computer to find your email, a friend called and wanted to read me the story of Sedna, because I had just finished a sculpture with bones for arms. Life is so interesting.

Why this confluence of syncronicities?  I personally, having worked for years with myths as an artist, and with Collaborators who are "activating" the myths through art and drama - I personally believe that the archetypes are alive in our collective consciousness, within the "dream body" of humanity. The story of Sedna is a very important story for our time.  It is about the suffering and sacrifice of the  Sustaining Mother, what happens when Mother Earth is disregarded and abused,  and the rites of at-one-ment the Inuit did to regain balance and good relationship with Her. It recognizes the interdependency of all beings, and the need for honor, and Balance.   It is also about the suffering of women at the hands of men, the imbalance that occurs when the feminine is not honored, and what must arise in order to restore the Balance.

It's about exactly what we lack in our industrialized, climate imperiled  time: a deep ecological understanding of reciprocity with the living Earth and all the mutually inter-dependant beings we share our lives with.    The "Story of Sedna" is an old myth that belongs to an indigenous people most Americans have never heard of - yet it is a myth that has universal and contemporary significance.  The telling that occured in our event was ripe with synchronicity because it was a story that needed to be told again.

Interestingly (synchronistically)  "Restoring the Balance" was produced at All Nations Hall at the Muse Community Arts Center  on April 9th, 2004.  I did not know it at the time, but just a few weeks before that NASA announced the discovery of a new planet beyond Pluto which astronomers named "Sedna".  *  (I learned about the new planet shortly after the event.  It seemed, to my personal poetics, like a synchronistic and grand metaphor for the concerns of our time, and I thought of my fascination with another indigenous Goddess, the "midwife of the New Era", Spider Woman.**)

When we step inside the magic Circle "between the worlds", when we enter the "fissures", we find we are not alone. Here's another quote from Alex Grey, in an interview I did with him and Allyson in 1989:

"If you reach down far enough, we're all made up of the same archetypes. Joseph Campbell talked about what he called "core myths". As did Jung. If you go deep enough into yourself, you find yourself in a noisy place with a lot of other people. And if you draw symbols from there, you plug into a collective form of consciousness."

Well, back to the studio now, and hopefully, the Cracks will continue to open, even if I'll never understand why.

"There's a crack in everything - that's how the light gets in."

* "March 15, 2004: NASA-funded researchers have discovered the most distant object orbiting the sun. It's a mysterious planet-like body three times farther from Earth than Pluto.

"The sun appears so small from that distance that you could completely block it out with the head of a pin," said Dr. Mike Brown, California Institute of Technology (Caltech), Pasadena, Calif., associate professor of planetary astronomy and leader of the research team. The object, called Sedna for the Inuit goddess of the ocean, is 13 billion kilometers away. Sedna will come closer to Earth in the years ahead, but even at closest approach, about 72 years from now, Sedna is very far away. Then it will begin its 10,500-year trip back to the far reaches of the solar system. "The last time Sedna was this close to the sun, Earth was just coming out of the last ice age. The next time it comes back, the world might again be a completely different place," Brown said.

Mysterious Sedna: Astronomers have discovered a mysterious planet-like body in the distant reaches of the solar system.

** In some Pueblo mythologies Spider Woman (Tse Che Nako, the Thought Woman) is a Creatrix Goddess.  She also is a Midwife to each new Age.

"The end of the Hopi calendar, and entry into the "5th World", is thus also about the "Return of Spider Woman", the cosmic weaver who is also, in the Pueblo mythological universe, the midwife who guides the "new people" through the Sipapu (or birth canal) in the sacred Kiva, offering a thread (or a ladder) to rise up into each "New World"...... I reflect that in the Circles I've participated in, there are 5 directions: North, South, East, West, and Center. The Center is that which unites everything, the breathe, the dark space, ecological interdependency, the Web.  Integral."

"Every atom of your body is connected to every other atom in the universe, as it exchanges energy and information with the vacuum"...Nassim Haramein

Synchronicity has been around for a very long time. This is a good one!