The World According to Monsanto: A Terrifying Look

They say that all evil really needs is enough good people who say nothing, and I think the amazing passivity with which Americans are allowing Monsanto to change, own, and modify our food source is terrifying.    I posted previously about the "Monsanto Protection Act" that was just passed, and feel, in good conscience, that I need to post further for the benefit of any who may not know.  Below  is the   documentary "The World According to Monsanto".   Having watched it, I BELIEVE EVERYONE NEEDS TO SEE THIS FILM.  This is truly monumental, and frightening, whether we're hearing a French scientist report that the universally used weedkiller Roundup "provokes the cell division leading to the formation of cancer", to the almost complete  loss of independent farms and  biodiversity in Uruguay.

In India farmers are being driven to suicide because they can no longer, due the fact that Monsanto completely controls the cotton seed market,  afford to plant their traditional crops (Monsanto and the Seeds of Suicide)........(see also "The World According to Monsanto" below to understand the problem).  As a result, they are falling deeper and deeper into debt, losing their lands, and being displaced from traditional homelands. 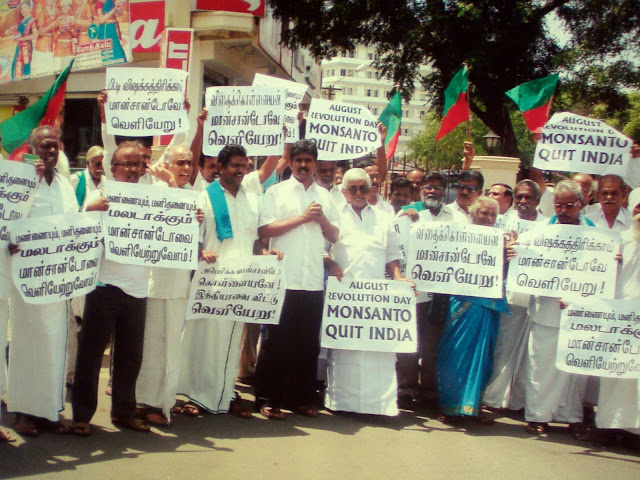 As a mythologist,  I cannot help but reflect that the two most popular Epics of the 20 years was "Lord of the Rings" and "Harry Potter", both about a "Dark Lord" intent on sacrificing everything in the pursuit of power.  When I think of forces in the world like the arrogance and soul-lessness of Monsanto, I think of these films, reflecting the shadow of our crucial time.

"Monsanto's talk of ‘technology' tries to hide its real objectives of control  where genetic engineering is a means to control seed.  These are the promises Monsanto India's website makes, alongside pictures of smiling, prosperous farmers from the state of Maharashtra. This is a desperate attempt by Monsanto and its PR machinery to delink the epidemic of farmers' suicides in India from the company's growing control over cotton seed supply - 95 per cent of India's cotton seed is now controlled by Monsanto."......GMOs are failing to control pests and weeds, and have instead led to the emergence of superpests and superweeds.   The highest acreage of Bt cotton is in Maharashtra and this is also where the highest farmer suicides are. Suicides increased after Bt cotton was introduced - Monsanto's royalty extraction, and the high costs of seed and chemicals have created a debt trap.  As Monsanto's profits grow, farmers' debt grows........Monsanto's seeds are seeds of suicide."

Thanks to Janie Rezner for article.

Wow, they really are the dark lords, aren't they? This film is on my watch list!

Yeah, Monsanto has always been evil; check out their history (http://www.gmwatch.org/gm-firms/10595-monsanto-a-history)! The tactics they use in their “patent-infringement” program against U.S. farmers is legendary – it’s nothing but a monumental shakedown reminiscent of Mafia type stuff, pure extortion. Many farmers paid settlements simply because they didn’t have the money to fund a legal fight. I don’t care for Monsanto and these big corporations who give genetically modified crops such a bad rap; they’re criminals and should be treated as such. But then Wall Street is made up largely of criminals whose actions recently led to the near collapse of the World Economy and what really happened with that. Thanks to Antonin Scalia and his little group of bitches for validating the subtle contradiction: Prohibitively Expensive Free Speech. We live in an oligarchy . . .

But I still support GM crops due to their problem solving abilities. For instance “golden rice” (http://www.goldenrice.org/), a genetically modified seed which has proven to be a better delivery system of vitamin A than spinach – and the seeds can be re-planted, unlike the Monsanto stuff. From the website:

“Those most in need of this new seed-based technology are those who can least afford buying an adequate diet, rich in essential nutrients. This has been taken into consideration by the creators of Golden Rice, Profs Peter Beyer and Ingo Portrykus, and the crop protection company Syngenta (http://www.syngenta.com/global/corporate/en/grow-more-from-less/caseStudy1/Pages/choices-on-the-farm.aspx), who have worked together to make the latest, improved version of Golden Rice available for humanitarian use in developing countries, free of charge.
The Golden Rice Humanitarian Board encourages further research to determine how the technology may play a part in the ongoing global effort to fight Vitamin A Deficiency in poor countries. While Golden Rice is an exciting development, it is important to keep in mind that malnutrition is to a great extent rooted in political, economic and cultural issues that will not be solved by a technical fix. Yet Golden Rice offers people in developing countries a valuable and affordable choice in the fight against the scourge of malnutrition.”

Maybe it’s all just hype but I don’t think so. You can peruse the websites and decide for yourself. You know, it seems there always has to be a few bad apples spoiling the bushel . . .