"The object isn’t to make art,
it’s to be in that wonderful state
which makes art inevitable.”

Sometimes I wake up  with a strange, often annoying,  song playing in my head.  Usually one that won't go away until I sit down and think about it.  In the past I' ve had songs from  the Beachboys, commercials, and Peter and Gordon.  Recently it's  Olivia Newton John - three days of:


"Got to believe we are Magic,  nothing can get in our way"

So.........what could this mean?  Is there something  I need to pay attention to, mediate on, or do I just have a loose synapse stuck in the 70's somehow? Considering I just wrote about Monsanto as comparable to Voldemort,  perhaps one meaning is that we must not allow such corporate Black Magic to sap our hope.  We can create change.

The Dictionary defines magic as "the belief that  things, people or events can be affected through supernatural forces".  Starhawk defined magic as a verb,  proactive:


"the art of changing consciousness at will"

Perhaps, viewed as a verb rather than a noun,  "Magic" is a way of  "changing consciousness at will" in order to more consciously and  creatively engage with the co-creative universe, with Flow*.  That's where we become "Sorcerors", seeking an active connection with  "Source".

In the painting I did for the  "Magician" Card, from the Rainbow Bridge Oracle  (it's actually a portrait of my ex-husband, who is also an artist) the  Magician is, making the universal gesture of Invocation.  I never saw the classical Tarot card as about  "commanding", but rather, using skilled attention and the various tools available, he is opening himself, inviting, the cosmic White Light  to work through and with him in order to create, to manifest on the material plane. 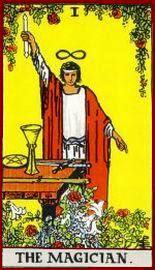 He draws the white light of universal energy ("the Above") through his hand, through his will and and his willingness to create (to "handle").  But the light must move through is heart, his desire, inspiration and passion, in order to  manifest on the physical plane ("the Below").  Tapping into "Source", his creative energies manifest and unfold, and are broken into the "rainbow" components of the physical world in all of it’s  diversity, it's vast spectrum of form and expression and evolution.  From the One, the Many.   The Mage is an artist in every sense of the word, for his magic arises from  understanding and respect for the tools he has to work with,  and a realization that ultimately all things are one, connected to the infinite realm from which all manifestations originate.

The card, read in my own deck, urges the persons being divined to remember that they are artists - the  Magicians of their lives.  We each can  "invoke" our  potential through wise use of will, vision and inspiration.   Reversed, the card can indicate an inability to manifest (create)  due to any number of conditions, including lack of self-esteem, discipline, or necessary education.  The Querant may also be rendering his or her  "power" over to others, and the card may indicate the presence of an individual displaying an  egotistic abuse of  power, or an  urge to manipulate others, that lacks both spiritual understanding and contact.

Perhaps this is a hopelessly idealistic thing to say, but ultimately, all enduring creativity has to come from love.  We become Sorcerors when we draw from the the Source.   I also love the word "enchantment", which comes from the Latin root word "chanter", to "chant" or to "sing".  Thus to  "en-chant" is to join with the chorus,  to  be "within the Song".

Everyone knows the magical word "Abracadabra", which stage magicians exclaim just before they pull a rabbit out of a hat.  But not everyone knows that (from Wikipedia)  variations on the word were used as a magical formula by the Gnostics of the sect of Basilides in invoking the aid of beneficent spirits against disease and misfortune. It is found on Abraxas stones which were worn as amulets.   Subsequently, its use spread beyond the Gnostics into popular usage.  Abracadabra is probably derived from the Hebrew or Aramaic language "Avra Kadavrai" (אברא כדברי) meaning "I will create as my words".

"I've often heard words and songs as I work.  I felt an underlying pattern or rhythm.  I wanted to include that sensation, to make it part of the structure.  "Singing" seemed important.  The creation myth of the Australian Aborigines involves the idea of "singing the world into existence".  I wanted to feel a musical time in the work, as if I was walking and singing.  Again, here is that relationship between figure and land:  I saw rhythm reflecting consciousness walking across the land, the walk of consciousness.

Dreams frequently precede what happens in my work.  It's like what I was saying about the poem being not so much a reference, but a part of the work.  The dreams are a part of the work as well, there's no separation."

Caroline Beasley Baker, discussing her installation "A Magic Spell For The Far Journey" (1989)

Great post. And wow, what a powerful depiction of the magician! Maybe the magic in your dream is simply addressing a need for magic in daily life. I try to find something magical daily. Doesn't always work...but when it does, my day certain unfolds more smoothly. Wonderful post.