Happy May Day to all!

Since Beltane (May 1) is an auspicious day with a truly ancient precedent, I can't resist a bit of his & herstory to honor the day, and a few May Pole pictures.   May the  RITES OF SPRING quicken the weary sap of all, may you find a bonfire to dance around, may the May Queen bless you!

The birth of spring on May Day in Elizabethan England would send villagers into the woods to collect flowers and boughs, and then they would wait for the sun to rise as it brought the fully opened year flowering into spring.   A few years back  I was fascinated with the origins of the famous legend of "Lady Godiva" in Coventry, England.........with the kind help of scholar and gardener  Robur D'Amour, who wrote a fascinating article about Lady Godiva,    I learned that origins of this legend are probably to be found in the ancient pagan  ride of the May Queen to the sacred tree ( the Maypole), the "coven tree". 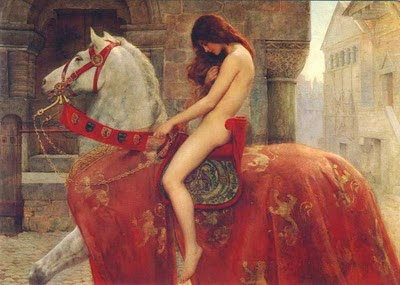 
"The official etymology of Coventry is that it means Cofa's tree. A tree owned by Mr Cofa!  A very early spelling, 1050, is Couaentree.  I found, by chance, a reference to Coventry as bring a rebus for 'a coven round a tree'. Well, it is undeniably a rebus. But that doesn't mean anything conclusive.  There was a widespread practise for dancing round a tree on May Eve, which is the maypole. Perhaps there really was a tree that was used for festivities."

"The story that Lady Godiva was protesting against taxes is untrue.  Apparently, at the time the procession dates from, Coventry was a village, and there were no taxes.  The procession is actually a May-Eve fertility procession, many of which are found across Europe. There is even one at Southam,  a few miles from Coventry, which is no longer celebrated.  What happened at Coventry, was that there was a Benedictine monastery there. The Christian monks did not approve of people watching the fertility procession, and so put some 'spin' on the procession, and invented this story about taxes. "

The origins of the May Queen, the young Goddess, and agrarian celebration of the Rites of Spring throughout Merrie Old England and Europe are very ancient indeed, and probably go  back to the "sacred marriage", whereby a couple, representing the young Goddess and God, would make love in the fields, encouraging and participating in the fertility of the world.

In villages throughout England, a procession would bear flowers, all the while capering around the new Maypole chosen for the celebration. Only unmarried girls would be allowed to plant the phallic Maypole into the fertile Earth........a lovely dance and ritual based upon pagan practices of sympathetic magic.   In other words, "the world is waking up and making love, so we too wake up and make love, and all will bear fruit".

The planting of the May Pole, and the union of the May Queen with the May King (or the Green Man) probably has its origins in very ancient traditions of the Sacred Marriage, going back as far as Sumeria and the marriage of Inanna and Dumuzi - or probably farther even than that, into unknown origins in prehistory.   In ancient times, the spring ritual union of the King with the priestess (representing the Earth Mother) was a very significant rite; in later times, even in Christian Europe, church morality may have been suspended for Beltane, as couples went out into the fields to participate in the ripening fertility.

This celebration of the fecundity of Spring no doubt made many of the early churchmen nervous. In the late 19th century,  May 1 became associated with the growing labor movement, and since then many countries have celebrated May Day as International Workers' Day.  In 1955, Pope Pius XII instituted May 1 as the "feast of St. Joseph the Worker" with the intention of emphasizing the spiritual aspect of labor.........I'm sure the advent of this secondary meaning to May Day came as a belated relief to the Catholic Church, along with Lady Godiva's famous ride becoming folk legend.

For myself, I think the re-sacralization of sexuality, in tandem with the blossoming of the world, that was the original meaning of May Day.....is a wonderful Holy Day, and am often surprised by how little people today know of it's origins.  This  has to do with the de-sacralization of sexuality that has followed closely behind the monotheistic Judeo-Christian-Islamic God - it seems the One God does not approve of sex, or the raucous  turning of the natural year that becomes spring's fertility.   Not a bad argument for polytheism, where, when there is a multiplicity of Gods and Goddesses, things are a bit more tolerant.

Traditionally, the Maypole was hung with garlands and streamers. Dancers took hold of the ends in a weaving courtship dance.

Boys would dance in one direction and the girls in another, and so flower-clad ribbons were woven around the pole in the form of a braid. There might also be a procession led by Jack O' the Green (a variant of the Green Man), fantastically arrayed with flowers, leaves and ribbons, and followed by Morris Dancers with bells jangling on their ankles. Last, there would be the choosing of the May Queen. 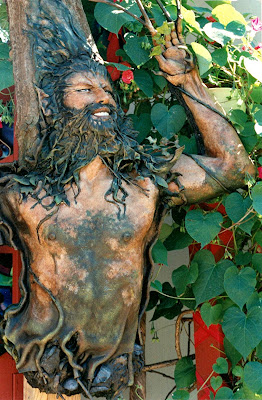 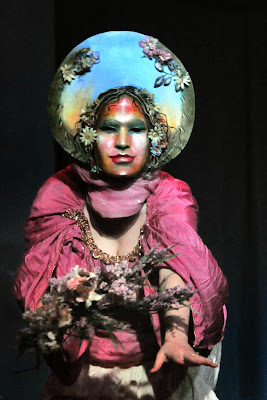 Flora was the Roman Goddess of Flowers and it’s not surprising that her festival was held on the first day of May. The May Dance festivals of Europe have many of their origins in the ancient “Feast of Flora”, the ecstatic Roman Rites of Spring.


"Whitman says, "And your very flesh shall be a great poem."............That is the message I'd like to offer on Beltane.  Our flesh is a symbol, a microcosm of the earth we inhabit. Our flesh is what connects us to the seasons; it is where we feel the cold of winter, and -- more and more in the Northern Hemisphere -- the warmth of the sun. It is in and through our flesh that we experience our emotions. We feel love in the flesh; anger in the flesh; exuberance in the flesh. The body is a treasure trove of sensation, and our sensations inform our temporal existence. Sensation may not be all of what life is, and the experiences of the flesh may be subjective and passing. But subjectivity and impermanence do not make a thing meaningless. Flowers bloom for but a short time, and when they do they are beautiful.  We bloom, too.

We are a body full of color and fragrance. We are a cycle of life unto ourselves, and we have good cause to celebrate our body -- our flesh -- for we have no knowledge of what is to come beyond this moment, this life, this body. We are here, alive, and we can, on the day and in the season of Beltane, choose to celebrate the life that we are living. We can choose to honor our flesh, and honor the flesh of others.  (What a world we would live in if the flesh was not seen as evil, but rather a manifestation of something holy and worthy of respect. I wonder if violence would be so commonplace if we recognized the flesh as sacred.)

Love the body you are in! Love your flesh! Celebrate this High Day with a fullness of being!!"

Thank you for the reminder! Not too many years ago, I read a novel that entered around beltrane. Now I need to recall the title!

Beltane Blessings to you, Lauren! We're lagging behind here in the forest, with only a few flowers out and needing some rain.

Beltane Blessings to all of you as well! Not to fear, Valerianna, your flowers will come soon, just as mine are all drying up in the coming desert sun............