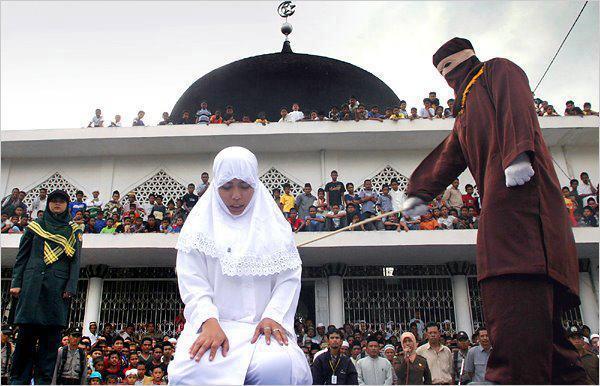 It is hard to imagine this is the 21st century.  When I look at this picture, it says a lot more to me than what the BBC wrote about. I see not only a tragic young girl, but I also see the very source of life, and by extension, our Mother Earth bending beneath those lashes. How many times will we have to shout, over and over and over, whether it's a rape victim in India, or old men trying to take away birth control from young girls here, or this horrific picture of a crowd of men enjoying the suffering of a little girl raped by her father..............?

"Women are the universal scapegoats, rivaling Jews, gays, Gypsies, et al for that horrific honor. Excuses are rarely needed to put women in psychological and physical chains...........Since scapegoating is a group or collective phenomena, the very fact of gender scapegoating is something of a mystery. Women make up more than half the world’s population. ." Arthur D. Colman

Maldives girl to get 100 lashes for pre-marital sex

A 15-year-old rape victim has been sentenced to 100 lashes for engaging in premarital sex, court officials said.  The charges against the girl were brought against her last year after police investigated accusations that her stepfather had raped her and killed their baby. He is still to face trial.
Prosecutors said her conviction did not relate to the rape case.  Amnesty International condemned the punishment as "cruel, degrading and inhumane".  The government said it did not agree with the punishment and that it would look into changing the law.

Zaima Nasheed, a spokesperson for the juvenile court, said the girl was also ordered to remain under house arrest at a children's home for eight months. She defended the punishment, saying the girl had willingly committed an act outside of the law.  Officials said she would receive the punishment when she turns 18, unless she requested it earlier. The case was sent for prosecution after police were called to investigate a dead baby buried on the island of Feydhoo in Shaviyani Atoll, in the north of the country.

Her stepfather was accused of raping her and impregnating her before killing the baby. The girl's mother also faces charges for failing to report the abuse to the authorities. The legal system of the Maldives, an Islamic archipelago with a population of some 400,000, has elements of Islamic law (Sharia) as well as English common law. Ahmed Faiz, a researcher with Amnesty International, said flogging was "cruel, degrading and inhumane" and urged the authorities to abolish it. "We are very surprised that the government is not doing anything to stop this punishment - to remove it altogether from the statute books."

"This is not the only case. It is happening frequently - only last month there was another girl who was sexually abused and sentenced to lashes." He said he did not know when the punishment was last carried out as people were not willing to discuss it openly.
Posted by Lauren Raine at 12:22 PM

Stories like this sicken me. They are all too common, this belief that women are chattel, that they are subhuman.

GrrrrrRRRRRRRR. What else can one say? Its all been said and the scapegoating continues. Infuriating.