Two Interviews, One with Janie Rezner on 3-11

I feel very honored  that I'll be interviewed by Janie Rezner for her "Women's Voices" radio program on Monday, March 11 at 7 pm Pacific Time (8:00 my time).  I'll be talking about masks, the new Numina collection, and the evolution of Ann Waters and Mana Youngbear's community performance "The Awakening".

You can listen in at  90.7 Philo, 91.5 Willits and Ukiah, and 88.1 Fort Bragg.    The interview can also be   heard live at www.kzyx.org  7 pm Pacific Time.  As with all of Janie's programs, the show will also be archived at www.radio4all.net under  Janie  Rezner, MA  Programmer KZYX.


I find that I am often reticent to "promote" myself, so I often don't announce things I'm doing on behalf of my work, such as interviews, articles published, etc.  I'm very proud of these masks, and absolutely delighted that they are being animated and filled with story by these talented and dedicated people.  So in thinking about this upcoming interview,  I looked up another interview I did a few years back with Joel Le Blanc from New Zealand, Editor of  Wildberries Journal .  Reading the interview again, I felt like sharing here (I've edited it a bit for brevity).

Now to not be too nervous on Monday!

Joel:    How has your art evolved over the span of your career?

You know, I don't know how to answer that. Our art is about our lives, and if we're fortunate enough to do great art, then we've touched something universal, and our art is also, somehow, about many lives as well. Art process is the residue of life, its record, exploration, archives, memory, and sometimes, its future memory as well. So, looking at my work, I see two things:   I see something that has always been there, something intrinsic to who I am., and 2., I see my maturation as a human being, the art reflecting that growth.

How has mythology and folklore influenced my art? At this point, it seems to be pretty much everything! Whether working with masks for individual customers, or pursuing "The Masks of the Goddess" project, or my current interest in the native American mythology of the Spider Woman, mythic mind seems to be my chief source of inspiration. Mythology, and the archetypes that undermine and "over-view" any given culture, are deep, rich, and alive, once one allows oneself to 'activate" them within your imagination. When you align yourself with myth, you align yourself with the mythic continuum, or "symbolic history", of the culture you live in.  Since we are now becoming a world culture, this continuum has expanded to include all of human culture.

Joel:  Do you feel mythology and folklore is still relevant to people living in today's modern society?

The great mythologist, Joseph Campbell, has been my personal muse and mentor. I met the artist Alex Grey ("The Sacred Mirrors") in NYC years ago. We were talking about the series of talks Campbell did with Bill Moyers (The Power of Myth) in the '80's, and Alex commented that Campbell was the "Avatar of artists". Myth and art are intimately connected.  I feel that myth is more important to todays evolving world than it has ever been. Mythology is one of the ways that human beings organize information - it is intrinsic to consciousness, and to how human beings have transmitted information from generation to generation. We think and comprehend and communicate through story.

The poet, Muriel Rukeyser, famously wrote that “the world is made of stories, not atoms”. Stories are at the center of our human nature, and our creative intelligence evolved from the tribal stories we told in our attempt to understand the mystery of the world. Story, myth, is our essence. Religions are also based on mythology, and for those who study the evolution of mythology, one begins to see the evolution of culture within the religious myths. They are threads that make the weave, and weave into present time from very ancient roots.

For example, "Jesus died for our sins". I know this may be hard for a fundamentalist Christian to consider (and I am by no means negating the profundity and variety of Christian theology)......but this idea is a myth that  derives distinctly from pre-Christian Hebrew "Scapegoat" rituals. I don't believe it was ever meant to be literallized as it has become.  When times were hard in Hebrew tribal societies, the priest would gather the people and there would be a litany of all the troubles, as well as broken taboos that might have offended the gods.. Then these "sins" were symbolically loaded onto the back of a goat, and the goat was cast out into the desert, to literally "carry away" the sins. This was an important mythological/ritual process with a great deal of practical psychological use for the tribes........and it made its way into the later development of Christianity, along with ancient tribal customs of sacrifice ("the Lamb of God"). Same with the re-birth of the sacrificed God in the spring, the resurrection of Osiris, a huge myth throughout the Middle East for several thousand years.

So the question we have to ask is "how are the old myths serving us?" Are they still useful, or not? And if not, what kinds of new mythologies do we need? That's where artists come in.   I think, for example, of the recent film "Avatar" by James Cameron........ how gorgeous a work of art and myth making, and how entirely appropriate for our time.

Joel:  You often refer to the "Spider Woman" of North American mythology, and you have even titled one of your blogs after her. Who exactly is the Spider Woman and how has she influenced your work?

The Spider Woman creatrix myth is ubiquitous throughout the Americas, and remains a profound metaphor to re-discover for our time. Grandmother Spider Woman is revered by the Navajo, for example, as a great teacher, and to this day midwives rub a bit of spider web into the palms of infant girls, so they will "become good weavers." Pueblo peoples called Spider Woman “Thought Woman” (Tse Che Nako), the goddess who spun the world into being with what she imagined. I find the Spider Woman myth, or archetype, utterly relevant to contemporary ecology, human community, and contemporary science, including quantum physics, which now suggests that we live in a “thought universe” wherein all things are interconnected, entangled, and responsive.


To the Hopi, as well as the Navajo, weaving is a spiritual practice, an act that uncovers a pattern already there. A good weaver aligns herself with Spider Woman, and seeks to work with the deep patterns. I suppose it would be hard, at this point, to say how Spider Woman has influenced my work.........my 2007 community project, "Spider Woman's Hands" sought to imply that our own hands are also the hands of Spider Woman, weaving the world into being together with the "stories we tell and dream".

Joel:  As a multi-media artist, do you have a current favorite form of artistic expression?

No, not really...........I think we find different ways of expression for the same idea. Because I've trained as a visual artist, that is what I'm most comfortable with, how I think, in images.

Joel:  What place does blogging and the world wide web have in your career and art?

Well, the Pueblo people of the Southwest believed that it was Spider Woman who led the people, at the disastrous flood that signalled the end of the 3rd World, up into the new world (the 4th age). It is now, according to the Hopi (and Mayan) calendars, the end of the 4th World. There are a few prophecies that, as in the past, Spider Woman will return, perhaps, to lead us once again into a new world and a new age. I kind of like to think of the the Internet as Her latest appearance.

Joel:  What are some of your upcoming and future projects?

My question now is: "How do we speak with the Earth?". I hope my journey (to Glastonbury)  reveals some answers.

Joel:   Now for an obvious question: do you have any advice to offer for budding artists and writers out there?

Nothing "practical" in a world that values money to the loss of soul. Art making, in whatever form, can be viewed as a spiritual practice that can reveal you to yourself, and can be a form of prayer or invocation. And artists are the myth makers and transmitters of cultural story......a very important task! I think it's important that artists, young or old, value the significance, personally and collectively, of our amazing worldwide artistic legacy, and the evolution and contribution each artist makes to that "Grand Conversation". 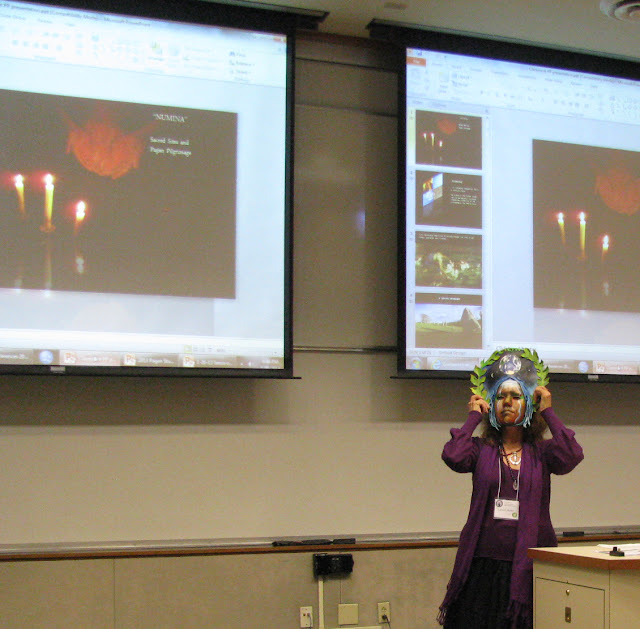 You'll do great! Radio is fun. You can do it in your pajamas!

Lauren, you are amazing! I am who I am today because of you.