The Feast of Samhain 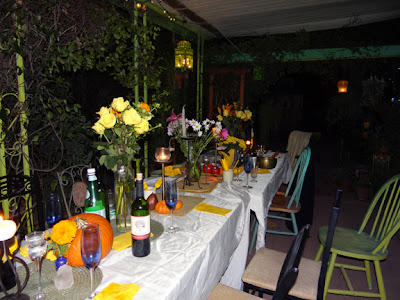 We just celebrated "The Feast of  Samhain' ( a table of 12, with the 13th seat, the Guest of Honor, reserved for the Beloved Dead)....... candlelit night of sharing stories of those who have passed away but are in our hearts.

And of course I remember always the Spiral Dance, which I participated in a number of times in San Francisco, and brought to Tucson in 2000 with the help of Macha NightMare. I've copied a video of the Spiral Dance below from UTube) .  When one has danced the Spiral Dance with 2,000 people, and come face to face with each of them in the course of the dance, you leave changed.

This is the sacred origin and meaning of Hallowed Evening. Spirits, coming close to this world to join the feast, sometimes like to play tricks, hence, "trick or treat"..........it's not good, of course, to fail to leave a place at the table, and a little single malt,  for Uncle Angus on such a high holy day! And of course, the "Witch and her broom". The Broom is associated with many folk traditions of "sweeping away the old bad energies" - purification rituals for the home and Hearth (Heart). Traditionally this was the time to celebrate the "Witch's New Year", the last of three Celtic Harvest Festivals before going into the dark of Winter.   It is the closing of the old year,  a time to honor the ancestors, the harvest, and the gifts of the year past.  When I lay out the Feast, I always imagine ancient  communities laying out the last fresh apples, the treasured honey mead reserved only for special occasions, and toasts raised  to the invisible ones,  their plates heaped high as well. Inherent in this celebration was a profound respect for the Spiral wheel of the year,  cycling the natural cycles of death and re-birth.

Here is my gratitude to the year that is soon to pass away, and to all of those who have passed away from my life as well, people who have gifted me and created with me and loved me, and I them.  Blessed Be!

Sometimes we don't realize, because things manifest through time, the ways that our wishes have often been granted.  Thinking of the Spiral Dance, and Reclaiming, I remember another one of those stories of Grace and Magic, and want to tell it, although, as all true stories are, it's part of a much larger story that is woven into the fabric of my life, and lots of other lives.  I think when we tell  these stories we get a glimpse of how seamless "reality" really is.  And Magic is always afoot, although I don't believe it has anything to do with wands.  I think it's much more about Weaving and being Woven.

When I was in graduate school, I began reading "The Spiral Dance" by Starhawk.  It was such a revelation, the way she spoke about the Goddess, and a theology of Immanence.  It became the central inspiration for one of my shows while in Grad school.  When I graduated I went to live in New York, and married, and then in 1997 got divorced.  My ex and I were very involved with the Pagan community on the East Coast, and when we divorced I felt like I lost my community.  With the bitterness that often accompanies a divorce, I decided I was done with the pagans, and spiritual things in general, and I also decided I would leave the East Coast and live somewhere else.  In those days I was doing Renaissance Faires, so I just packed up my van and became a nomad.

I had a booth in the fall of that year at the Maryland Renaissance Faire, and I happened to hear of a holistic health practitioner who also did shamanic work and "soul retrievals" in the area.  I figured it couldn't hurt, so I made an appointment.  We lay down on the floor, he "journeyed" for me, and "blew my soul pieces" back into my chest.  I didn't know what to think, but as he described his impressions, among them he told me that there were two things that would show me that the struggles of my divorce, and my old life, were over.  One was a magenta flower, a Cosmos.  The other was a little terra cotta female figure, like an angel or something.

In November I packed up and went to Arizona to spend the winter in my trailer at the Renaissance Faire there.  By March I was really wondering where to go next.  I had recently discovered the Internet, so I looked up just about everything I was interested in - Goddess, ritual, mask theatre, transpersonal psychology, etc.  Every single time it came up Berkeley, Marin Country, or San Francisco!   The clincher was when I was looking for the email for something called the Center for Symbolic Studies near New Paltz, New York.  I knew Stephen and Robin Larsen, and wanted to get a recommendation from them. Up came the Center for Symbolic Studies in Berkeley, California!  And the Center was the creation of a Jungian psychologist named Robert H. Hopcke  who had just written a book called There Are No Accidents: Synchronicity and the Stories of Our Lives!

Well, that was enough for me, so I packed up the van when the show ended, cat in the back, and headed west to California, back to the Berkeley I remembered so well but hadn't seen in over 20 years.  I decided I would sleep in my van if I had to, until I could find a place to stay (and fortunately for me, I had no idea of how hard it can be to find a place to stay in Berkeley now.....)

Arriving finally, I looked around for a familiar landmark, and found the Cafe Mediterranean.  I didn't know anyone anymore in Berkeley, but for old times sake I parked the van nearby and went in for my first Cappachino since the 70's.  As I stood in line, someone tapped me on the shoulder and said "Are you Lauren Raine?"  It was my old friend Joji!  I couldn't believe it.  He bought me a cup of coffee, asked me where I was staying, I told him I had just arrived and planned on moving back to Berkeley, and he invited to stay at his house where he had an extra room. Voila - I didn't have to sleep in my car for even one night!

And when I went to his house that evening, in his living room was a big, framed close-up photograph of a magenta Cosmos.

When, two months later, I found a room to rent with Judy Foster, the first thing I encountered when I walked into her house was an altar with a terra cotta angel.  And as it turned out, Judy was one of the founders of Reclaiming and the Spiral Dance, and a close friend of Starhawk.   The universe put me exactly where I needed to go.   Thank you Judy.........you are missed.