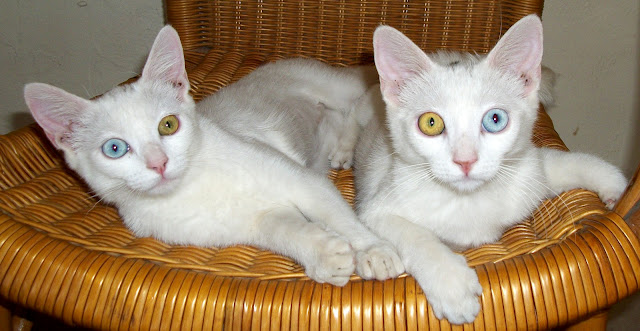 Lately I've been having lots of synchronicities around Turkey, which is strange, since I've never been there and have no plans to go.  But the best is to learn recently that my feline friends, Lulu and Lucy, are actually scions of an ancient line of cats from the great Turkish Lake Van. Van Kedisi cats are white, and very often have one gold eye and one sky blue, which legend has it is because they reflect the sun setting on the blue waters of the lake.   So valued are these cats in Turkey that they are not allowed to be taken out of the country , particulary if they have two colored eyes. Lucy and Lulu, the famous Van Cats!

The city of Van is situated  on the eastern bank of Lake Van. The largest lake in Turkey is an inner sea that covers 1,433 sq miles.  In the region, there is a  rare and ancient breed of cat called “ Turkish Van Cat ” (Van kedisi). All over the world the "Van cat" is recognized as a white cat with auburn patterns on the top of the head and a faintly ringed auburn tail - however, this is a breed that was created about 150 years ago from the original Van Kedisi stock.  In Turkey they breed  the real  " Van cat" which has a pure white coat. It can have both blue, both amber or one blue and the other amber eyes, but is especially famous for their mysterious two-colored eyes. This strong cat is beautiful, friendly, intelligent, faithful and lively. A surprising, and documented,  fact about these cats is that the Van Cat likes to swim in the lake, and is the only known cat that will willingly enter water.