Well, it is almost Halloween, and I've been doing some life review.  I've been making masks for 30 years, and I think it's about time I honor the "Spirit of the Mask" for blessing me, a lot of people who've worked for me over the years (or copied me)  and now have businesses of their own, and all the people who've used the masks, their dances that I never saw, the energy of the masks going on beyond me.  THANK YOU!  BLESSED BE!

Back in the early 90's, when I first began to make masks,  I belonged to a women's group, and a member of the group did something called "Re-Birthing".  We lay down on the floor, and with eyes closed did rapid breathing while she coached us.  The result was a visionary experience for most participants, and for myself, I had a vivid vision of myself looking at a kind of fissure in the earth from which emerged a mask (I remember it was red and pinkish, very elaborate).  As I "watched" the mask rapidly turned into another mask, and another, and another...............one after another, constantly changing into brilliantly colored masks!

When we gathered in a circle to discuss our journeys, I told everyone that I had just met the "Mask Deva".  And all these years later, I think I did, and perhaps I've been able to "uncover" a few of those masks that were revealed to me.  What a blessing!  So I felt like sharing a few along the way here....................... 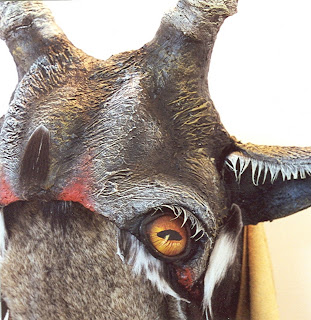 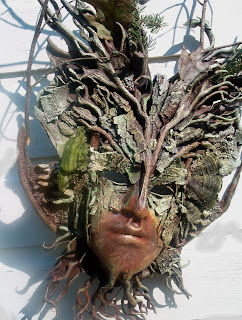 "Gaia" from a wonderful Solstice Residency at I Park in Connecticut, and the Goat Mask for Tragos, a film by the brilliant Antero Alli.


I used to tell people, "Give me a story and I'll make you a mask for it", but in this cynical world, most people didn't believe me.  Yet stories, and the collective stories that are called Myths,  are what fueled my imagination.  Give me a story and perhaps we can find its Face............. 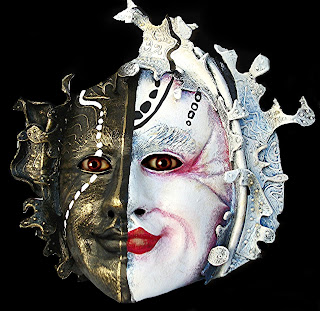 One of many "Heyoka" masks.  You can't do ritual theatre without the Liminal Heyoka circling, reminding us of the chaos and humor at the borders of "reality".  And have you ever noticed that there are some people who are just born for the job? 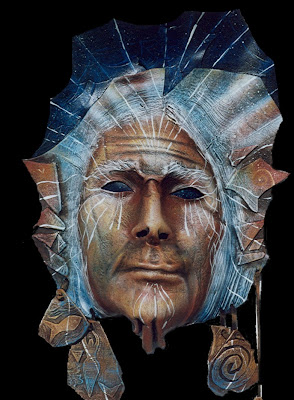 Another "Spider Woman" mask.  I was inspired by a science fiction story I read (alas, I don't know by who) in which the author described a person with eyes that were full of stars. 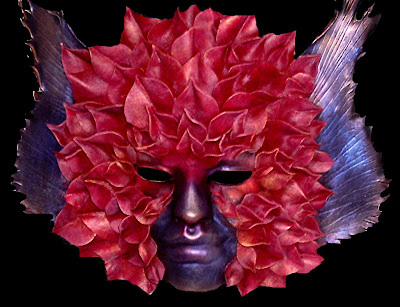 I love this mask, which was inspired by a creation of another mask artist I saw.
It's "The Deva of the Rose". 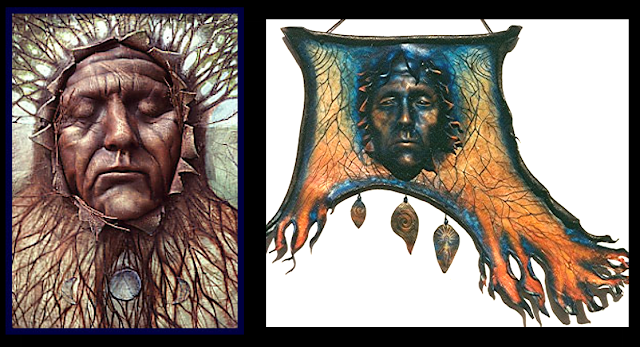 Two "Shields" I did with my former husband, artist Duncan Eagleson. 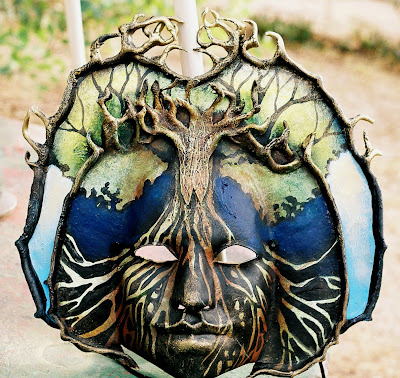 One of many Gaia masks. 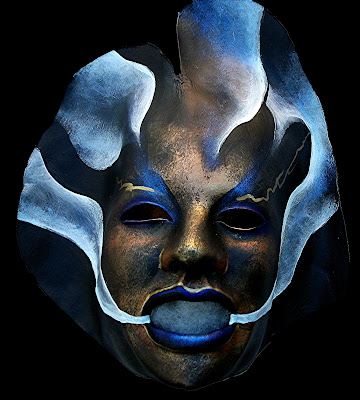 People have suggested that I put eyes in the masks so they are more sculptural, can be "hung on the wall".  But I'm always telling people that that's not really what they're for............they are in their very essence collaborative, and metaphorical of human multiplicity of being as well.  I like having the open eye holes, because they invite exactly that, collaboration with others.  The Artform is open, the eyes are open, and the mask always has the possibility of someone else putting it on, telling a new story, dancing a new dance.

And the open eye holes suggest the mystery and eternally changing formlessness behind the face we see, or think we see, the face that is ever changing........... 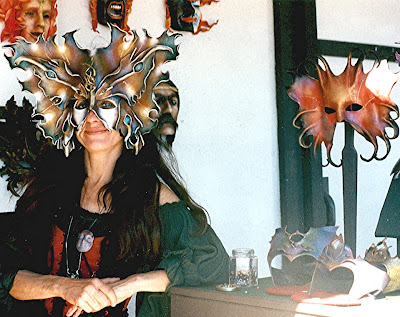 In one of my Renfair booths.  I don't know what's next, to be honest..........the "Numina" masks bubble and perk in my imagination, unformed as yet, and await those who will give them life and story.  Sometimes I have to wait for the story to turn up.  But for now there's a lot to be grateful for.

Your sharing has made my life so much richer!

These are breathtaking, Lauren. Your work plunges into such deep archetypal levels that language breaks down. These masks speak to the soul.

Thanks so much.......you never know how much encouragement you give.

Of course, most are for sale - I duplicate them sometimes if the original has sold.

HI was wondering if you are interrested in selling the Samhain ritual mask, the Crone aspect of three?

Thanks for your interest. That mask was sold long ago, but I can make another that is similar. The cost would be $250.00

Ahh okey. Was something about that mask that caught my attention. Beautiful work on all your masks btw.I dont want to pay for something that isn't finished and i dont expect you to make one so i can see it before i buy either?.

Ahh okey. Was something about that mask that caught my attention. Beautiful work on all your masks btw.I dont want to pay for something that isn't finished and i dont expect you to make one so i can see it before i buy either?.