Drop your suit or I'm dropping your store


Actually, going to Michaels is just fine with me from now on in.  By the way, is there anywhere in the Bible where Jesus says that women not have access to birth control?  What's next, a new Inquisition? 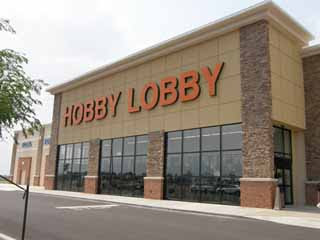 Hobby Lobby, an arts and crafts retailer founded by evangelical Christians, just announced that it's suing the government over certain women's health provisions of the Affordable Care Act--mainly, they don't want to have to provide their employees with insurance coverage for some forms of birth control, like IUDs or the morning after pill.  If they win, the result could be devastating for women, enabling other businesses to deny female employees birth control.

We've got to speak up. Hobby Lobby is a business like any other, and depends on its customers and good public relations to be successful. If enough of us speak out and show Hobby Lobby's Chief Executive David Green that the public is outraged by this move, they might have to back off, and it might make other companies less likely to try the same thing.

"All women deserve affordable access to birth control and its a woman's personal, medical decision on which form to use. I won’t be shopping at your store until you drop this suit, and I’ll be telling my friends to do the same."

Please sign and forward petition:
http://act.weareultraviolet.org/sign/hobbylobby/?referring_akid=183.99468.B6OdTr&source=mailto
Posted by Lauren Raine at 6:58 AM

I'll be signing this one, for sure. An inquisitions seems to be underway already!

I signed this. Thank you for sharing.