"Butterfly Woman mends the erroneous idea that transformation is only for the tortured, the saintly, or only for the fabulously strong. The Self need not carry mountains to transform. A little is enough. A little goes a long way. A little changes much. The fertilizing force replaces the moving of mountains.  Butterfly Maiden pollinates the souls of the earth: It is easier that you think, she says. She is shaking her feather fan, and she’s hopping, for she is spilling spiritual pollen all over the people who are there, Native Americans, little children, visitors, everyone. This is the translator of the instinctual, the fertilizing force, the mender, the rememberer of old ideas."
Clarissa Pinkola Estes, "Women Who Run With The Wolves"

I had a strange synchronicity that has personal meaning for me, although I am not sure I can convey it well to others.  When things like this happen I consider them not to be dismissed as  if i get that "ah ha" feeling. The power of the message has to do with what is going on in one's life at the time, as well as one's personal symbol system.  Interpreting synchronicities is much like interpreting dreams to me, both universal and very personal.  I've written about this before. This one, for me, is a reminder.

In 2003 I started gathering materials for my book about the Masks of the Goddess, their travels throughout the U.S., and the stories and people who told them and danced them. I was writing about two masks, the  amazing story of the Cornmother mask, and another mask I made, Butterfly Woman, based on readings of Clarissa Pinkola Estes about the Hopi.  I remembered that Christy Salo  (whose story is below) told me that she had, in the course of gathering materials for her performance as Selu, met a Hopi woman who was visiting Isis Oasis, and that she had given her some 300 year old sacred cornmeal to bless her performance.

I wrote to Katherine** in 2003.  She has worked with Hopi elders and activists, and founded a non-profit in San Diego called "Touch The Earth Foundation" back in 1993.  I hoped she would tell me more about why she felt moved to offer that corn meal, and also hoping she would tell me about the Hopi Butterfly Woman.  I never heard from her, and the book was eventually finished. And then, out of the blue, almost 10 years later, she answers me!

(I have to add that I just closed my AOL email account, and if the email had come a month from now it would have bounced back to her.)

Reading Katherines words about her foundation work just today (I knew nothing about her other than that she gave corn to Christy and was Hopi) I was surprised to see that she wrote about "rainbow hoop" work with diversity groups - and her  logo is at right.  That concept of the "rainbow corn", like the coming "rainbow tribe"  was why I painted a rainbow on my mask.....but until this month, I have never seen her logo or read anything by her.   I feel heartened by this, because it remembers me to the interwoven threads that connect us all beneath the surfaces of things. It encourages me in mythic work, and that of my colleagues, women and men.  And I thank the Goddess, in all of Her many forms, for weaving these messages through us all.
Corn Mother (Selu to the Cherokee) sustains us. Butterfly Woman  bears the important job of pollinating the corn so that it will bear fruit and feed and sustain the next generation......(traditionally she was performed by an old woman, because it was believed that a woman with experience and "weight" was suited to do the job.  I like that....) 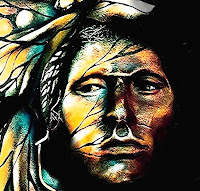 Butterflies are not only ephemeral creatures that embody the perfect metaphor for transformation. They are  the final life stage of the caterpillar, responsible for laying the eggs that will ensure future generations of butterflies. They are  generators of the future, because as Pollinators  they must also see to it that not only caterpillars, but many other kinds of life are able to have a future. Just as diminishing populations of honey bees threaten the food crops, so too are these creatures potent.
What is the pollen?  The pollen that generates new civilizations, and new paradigms......that pollen is made of stories.

"And here too come visitors to the dance, some of whom are very starved of their geno-myths, detached from the spiritual placenta. They have forgotten their ancient Gods. They come to watch the ones who have not forgotten."

In  "Women Who Run With the Wolves", Estes tells of  the Butterfly Dancer, slow, sure, with her traditional tokens of empowerment.

"Her heavy body and her very skinny legs made her look like a hopping spider wrapped in a tamale. She hops on one foot and then on the other. She waves her feather fan to and fro. She is The Butterfly arrived to strengthen the weak. She is that which most think of as not strong: age, the butterfly, the feminine."

"She is La voz mitológica" Estes reminds us, the "Mythic Voice". 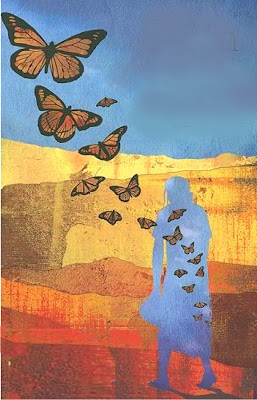 What's a mask?  A mask is a way to invite a persona, or to "invoke" (join with) an archetypal being, to  express within oneself and within the collective experience of ritual and theatre.  In the early days of theatre, whether in Greece or Japan,  all actors used masks.  To wear a mask that is deeply archetypal, such as the mask of a Goddess or God or an animal power (as contemporary participants did with the masks in my "Masks of the Goddess" collection) is, within indigenous traditions, to "bring the deity to Earth" to bless, prophesy, and instruct, to tell the sacred stories and legends, and to enliven and "seed" the imaginations of those present.
So back to my book about masks, and my 9 year old email to  Katherine,  just now answered. 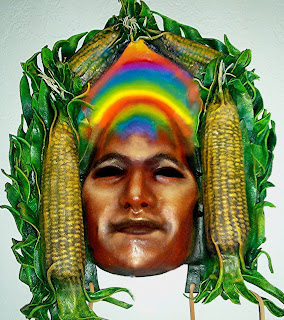 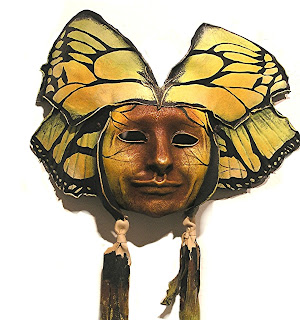 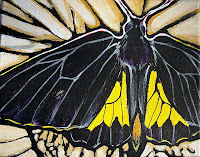 Touch The Earth Foundation was founded in 1992 to provide education and instruction in cross-cultural customs and beliefs.
"When we open a door, such as a “Medicine Wheel”, we must be mindful that the spirits are of our pure intentions; they are gifted and hosted with corn meal or tobacco in some parts of the world. Then, after the ceremony, give thanks and close the door behind you so mischief will not change your intentions of Universal Balance and Peace. Think of  Brothers from Tibet, they often make Mandalas and often they take many days, even months, to accomplish. And after the ceremony the prayers and divine message and Mirror to the Universe is destroyed and returned to Mother Earth as the Reflection is already in the other worlds. We live in the world of temporality and so it must be destroyed so the intention will not be misused or become stagnant."

I think of you, Lauren, every time I see a butterfly. To me, they are the most transformative of creatures, magnificent in the instant you see them, flitting about, wings luminescent in the sunlight, and then suddenly they are gone. I would love to see one of your mask performances.