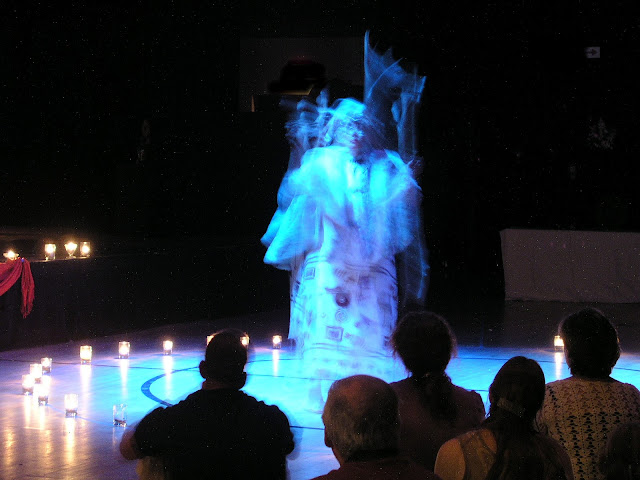 We call on you now.
Rise up from your roots.
Hear us, our voices of pathos.
See our dancing feet,
With our hearts, we drum you back.

I've been doing  energy work  that is about 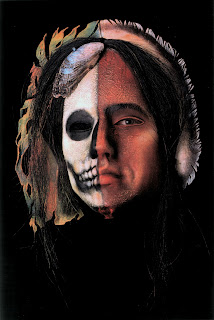 the ways we block ourselves with negative patterns....not just as ideas, but as unconscious fields, "resonance".   I don't know how to describe the work, to be honest, except to say that it's come to me in a rather miraculous way.  I thank Lonnie for her generosity!

This past week she gave me some "homework".  We were working on the way that I have, in the past ten years, shut down much of my psychic sensitivities, because of being in an  unsupportative environment (family) as well as some negative experiences in the past. Living in a field of "unbelief" creates unbelief.  But now it's time to open again, so that I can be  more integral in all aspects of my life.  Filtering experience through what we "believe" has a lot to do with what we actually experience (remember the old saying that to a thief, the greatest saint in the world is just a set of pockets?).

Homework was to do something that "takes back power from not believing".  I  said that I would share my spirit photos, because they are one of the most extraordinary affirmations I've ever received.  Taken at a performance/ritual called "Restoring the Balance" by photographer Anne Beam in 2004, I've always felt there was a reason they happened, and  they were meant to be shared because spirit had something to say. But I've received all kinds of negative dismissals from people about them, including people who think I, or Anne, "photoshopped" them.  I didn't, and I know Anne didn't either.

To read about the performance, and the way it came to be, there's an article on my website:  "Restoring the Balance - a Celebration of the Great Mother".  It's too difficult to show these photos with the entire context without re-writing the article, but in brief, different masks from my collection were used to perform stories of the Goddesses.The event was inspired by my meeting with a Native American storyteller, Grey Eagle, who spent  years among the Inuit in Alaska as an activist, sharing their stories and rituals.***

We used the "Story of Sedna", the wounded Earth/Ocean Mother of the Inuit, and their rituals of atonement and attunement as the focus for our performance, which was above all created as a ritual for the same purposes of Earth Honoring and Healing.  Synchronistically, as we were rehearsing the performance, we learned that a new planet had been discovered beyond Pluto, which had been named "Sedna".  The photos were taken by Anne of that performance/ritual on April 9th, 2004.   So here goes:

In this photo, Erica Swadley is performing the role of "Sedna's Shaman".  In the rituals that are done for "restoring the Balance", prayers and confessions are "gathered" by a female shaman (Grey Eagle told me this), who then takes them to the suffering Sedna deep in the depths of the ocean.  She brings the prayers and "promises to create a better life story" to her, and cleans her body from the filth that has fallen down upon her.  She combs Sedna's long hair, and brings to her the love and regrets of her people, asking her to forgive them, thanking her for food and life,  and to restore the balance.  Erica, I believe, chose this role because she herself is an experienced shamanic practitioner and healer, as well as a poet.  The photo shows her before the story begins, doing a prayer dance to invoke Sedna.  Notice the strange, but beautiful, overlay of two faces in this photo.  Erica is a white woman in her early 60's. The younger face, that seems to have white stripes painted on her cheeks, looks distinctly non-caucasion to me.  It's not Erica's face, and I don't believe she was praying/dancing alone.

The "Invocation to Kali" was done by another prominent shaman in Tucson, Quynn Elizabeth.  Quynn had ritually worked with Kali in the past, and the Kali mask was a good fit.  Here she is in the dress rehearsal with the mask - note that her costume is black.  And here she is dancing at the performance itself.  There were theatrical lights on her, but nevertheless,
notice how she seems to "disappear".


This is the most striking photo.......you can see the back of Quynn's head and her back, and there is a "figure 8" shape, and in front of that what Anne and I decided had to be a goat.  That seemed pretty bizarre, but later I thought about how in India goats and sheep were sacrificed to Kali when devotees went to pray.  Perhaps, symbolically, Kali was accepting our "Offering", and provided us with a "goat".
THE VISITOR

Anne called this photo "the visitor".   It's the end of the performance,  all the cast has emerged and is circling in a dance just before the music stops and everyone takes a bow.  You can see the audience and the dancing cast, and between them a white form that looks like a head and shoulders.  Here's the photo after I put it into negative:
It looks even more like a face with high cheekbones.

My favorite photos from the performance are those of dancer, Tarot instructor and Wiccan Priestess Morgana Canady performing the role of Spider Woman.  I used the story of Spider Woman, the great Weaver, to demonstrate the truth of interdependancy and interconnection as she wove a web (literally) with the audience from many cords that came from a "sacred hula hoop" she held around her waist.  For that brief while, as the entire room chanted "All One, All One" everyone there was connected to threads that were held by cast and audience, extending to the last aisle.  Morgana, aspecting Spider Woman and acting as a "filiment" at the center to raise the energy with the audience that will release the prayer/intention of the ritual, also seems to disappear in light. 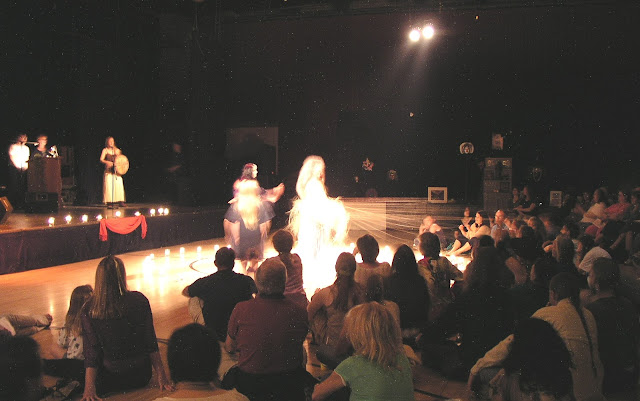 Here's the Web made of strands of cord being created with the audience. 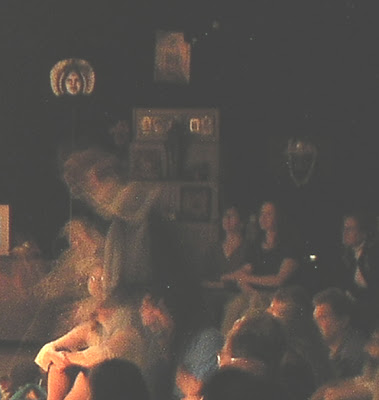 Shapes that obscure a shot of the audience during the "weaving" segment - looks a bit like a hand to me. 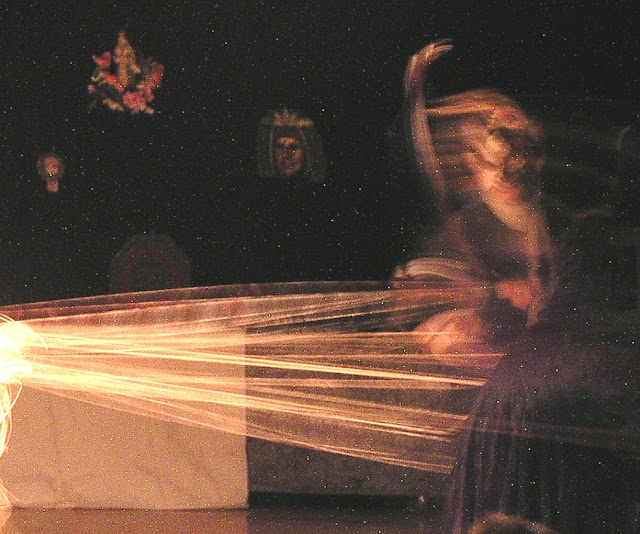 My favorite photo - "Spider Woman's Hand".   The cords are from the "web" Morgana is weaving, cords the audience is holding and extending back.  The black blob on the right is one of "Spider Woman's assistants", who is wearing a black cape.  We have no idea what the little white spots all over the place are, perhaps they are like orbs, energy forms.  Just above the black caped shoulder is a hand that is weaving!  That hand cannot be explained, except that it is, for me, who has written about Spider Woman for many years, a hand of blessing and of  affirmation.  (And, interestingly, I went on to receive a fellowship at the Aldon Dow Creativity Center in Michigan in 2007 for a community arts project I called "Spider Woman's Hands".)

Why were we given these spirit photos?  I believe because Spirit wants us to know that we don't create sacred performance, ritual, or art alone.  We are given "invisible means of support".  Also, because the message that Grey Eagle (who passed away in 2006) gave us about Restoring the Balance with Mother Earth, and the return of the Divine Feminine is profoundly, profoundly important.  They want us to pay attention.

So, there's my "homework" Lonnie.  And as before, I am truly grateful for all the support I have received in all ways.  Blessed Be on Mabon, the Autumnal Equinox.

*** Whenever I touch on this work, it always gets very synchronistic.  As I was beginning to write this article this morning, out of curiosity I googled "Restoring the Balance Ritual" to see if my previous article came up quickly on the internet.  My article came up number one, and after it a native American based site called "Earth Mother Crying" (http://www.earthmothercrying.org/Prophecy.htm)  (remember that the story of Sedna concerns Sedna crying and suffering beneath the ocean, and her Shaman going to comfort her).  If that wasn't enough, there is a rather long quote from a teacher (I want to investigate who he is further) called "Grey Eagle" on the page above.  He talks about the "5th Hoop" ..... which gives me insight into my long art project, the Rainbow Bridge.  And whoever is writing in the site talks about the importance of the return of the Feminine, and says that a great healing is going to start in Alaska!

Ok, my attention is fully engaged now, and I'm going to pursue this more in the future.  But for now, I need to close, but copy below a few words from the site above, which has provided me with such a splendid synchronicity. 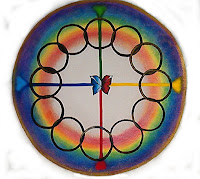 "They say that this is necessary to help keep the balance of Mother Earth. And that there are keepers of this balance that are around the world like us.......In moving into this time of the World of the 5th Hoop, it is going to be a time of great healing.....and the Hopi say that it is going to start in the North. I have learned just recently that it is going to start in Alaska.....................
The signs of this time of healing that is to start are: When the children bring back the spirit to the village; when the young start speaking with the wisdom of the elders; when the leadership energies start shifting to the feminine side; when this hoop of the 100 eagles feathers gets completed. And when the White Bison shows up. These are all the signs of the movement from the 4th to the 5th Hoop.


Your intuition is going to tell you what I am saying is true. The world for the last 4,000 or so years has been stuck in the male energy side. The male energy is thinking from the brain. It is a management from the top down. It is more aggressive. It does not use intuition or feelings from the heart. It is a different kind of energy. It is not a bad energy. It is just different than the female energy. Female energy is healing, nurturing, loving, caring, touching, sharing. The world spiritual leaders know now that these energies have shifted to the female side.


The center of the top of the energy entrance to the Earth Mother is here through Alaska. The spiritual leaders say that a host, hosts of angels, are coming through Alaska-- spreading out throughout the world for this healing to take place.

Notes:  I found the  "Grayeagle" above on a few other sites.  This is not the Grey Eagle I met, of course, but I am fascinated by this synchronicity:

"Blue Thunder, Teacher from among the Eastern Shoshone people, sent this significant message from Grayeagle from the Yukon Territory of Canada."
http://www.manataka.org/page1724.html

These photos are phenomenal! Just love them. Many years ago, I worked for a pathologist, developing photos of cells etc in a dark room off the morgue. There were so many spirits passing in and out of there and sure enough, some of them showed up on the photography paper. I have no problem believing these photos are real.

Thanks Trish.........I am glad I took Lonnie's "homework" and posted them. The synchronicity is interesting as well. I do feel they were meant to be shared, for a number of reasons, and now I've done that.