Urgent: Stop Censorship of the Internet before 1 - 24 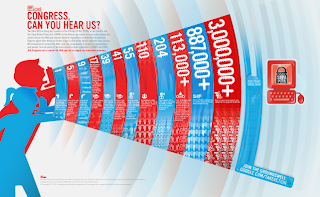 We've seen many erosions of our democracy in the past decade. And to control the media and transmission of information is THE most significant way to control people.  Millions of Americans oppose SOPA and PIPA because these bills would censor the Internet and slow economic growth in the U.S. Two bills before Congress, known as the Protect IP Act (PIPA) in the Senate and the Stop Online Piracy Act (SOPA) in the House, would censor the Web and impose harmful regulations on American business. Please take the time to understand how misleading these bills are, and how they could be used to control and censor the Internet in disatrous ways   before it is too late.  Here's where you can sign a petition sponsored by Google:

Supporters of PIPA and SOPA:

Opponents of PIPA and SOPA:


Here's how you can sign a petition by the American Civil Liberties Union (ACLU):

Corporate supporters of Senate 968 (PIPA) and HR 3261 (SOPA) demand the ability to take down any web site (including craigslist, Wikipedia, or Google) that hurts their profits -- without prior judicial oversight or due process  -- in the name of combating "online piracy." PIPA and SOPA authors and supporters insist they'd only go after foreign piracy sites, but Internet Engineers understand this is an attempt to impose "Big Brother" controls on our Internet, complete with DNS hijacking and censoring search results. Incredibly, many Congress Members favor this idea.


Tell Congress you OPPOSE Senate 968 "Protect IP Act" (PIPA) and H.R. 3261 "Stop Online Piracy Act" (SOPA):
Where does your Member of Congress stand on PIPA and SOPA?  PIPA and SOPA Are Too Dangerous To Revise.....they Must Be Killed Entirely .
Congress needs to hear from you, or these dangerous bills will pass - they have tremendous lobbying dollars behind them, from corporations experts say are attempting to prop up outdated, anti-consumer business models at the expense of the very fabric of the Internet -- recklessly unleashing a tsunami of take-down notices and litigation.   Don't believe it? Monster Cable has labeled craigslist a "rogue site," earmarked for blacklisting and full-takedown under PIPA .

**(Note:  Are we ready to lose Craigslist so Monster Cable can improve its profits?)

There is still time to be heard. Congress is starting to backpedal on this job-killing, anti-American nonsense, and the Obama administration has weighed in against these bills as drafted, but SOPA/PIPA cannot be fixed or revised -- they must be killed altogether.   Learn more about SOPA, Protect IP (PIPA), and Internet Blacklisting:
As Bill Moyers has famously pointed out (you can see him speaking about Media and Democracy on Link TV at:  http://www.linktv.org/programs/special_moyers) democracy is not possible without freedom of information and speech.  Below is an excerpt from his  2007 speech on media and propaganda.

thanks for posting this!