I had a dream the other night (it was rather graphic) about getting together with an unknown man with the aim of becoming pregnant.  He was quite obliging.  Weird......but I suppose, in symbolic terms, it's a good sign.......... 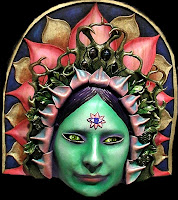 The day  before I went into surgery in November, I received an email from Prema Dasara, who wanted to knowif  I was still interested in creating the 21 masks of Tara we had discussed in previous years - they were to be made in Bali, a collaboration with Balinese artists.  I felt very much encouraged by this synchronicity (I often  pray to Tara for healing), and said (to Prema and to Tara) that I would be most glad to do it if the results of my surgery were positive.  And so they were!


But Prema has had to cancel the project for this year.  I reflected on how many women have requested the use of the "Masks of the Goddess" Collection, which was sold at a benefit auction for the Independent Eye's production of The Descent of Inanna in 2008 (I'll write about this powerful play in the future).

So I decided, since Prema's project fell through, that I would make a new collection of 21 masks of Goddesses, which I would hold in trust for all those who wish to use them in the future.  To get the funding I'd need to buy the time and materials to make the masks a friend suggested I use Kickstarter.

But I seem to be having the hardest time getting myself to post and start the 7-week fundraising process. I have to feed the cat, or take a nap, or watch Poirot......my video is good, my writeup is good, my "rewards" items (what people will receive as gifts for donating to the Project) are excellent (among them, the ceramic "Gaia's Hand" Icon above.)  I guess it's like turning on the ignition and beginning a trip that will take you across the country.  Or taking that first step toward the airline check-in desk.  This might be a long trip......


The Road goes ever on and on
Now far ahead the Road has gone,
And I must follow, if I can,
Until it joins some larger way
Where many paths and errands meet.
And whither then? I cannot say.
J.R.R. Tolkien

I guess I just have to close my eyes and take the plunge.  Synchronicities have clustered around the idea almost before I began.   Almost simultaneously, my friend Macha NightMare (Have Broom Will Travel), who I've collaborated with in the past,  proposed a first "inaugeral" performance at the Women and Mythology Conference in May.  Something very close to my heart, ideas I've been wondering and wandering about ever since I walked among the Stones in Avebury, and felt the living presence of the Springs in Avalon last summer - the Spirits of Place.   Here's Macha's Abstract:

"Ritual studies scholar Ronald Grimes suggests that relearning of ritual ways can help us re-attune to the environment at a time when the ability of our Earth to sustain our lives is imperiled.  “The surge of popular interest in the ecological possibilities of ritual is fed by a rich, publicly consumed ethnographic literature, some of which depicts rites as a primary means of being attuned to the environment.”  Artists, ecological restorationists, and composers are exploring the use of ritual to enhance our understanding of our interdependence and our responsibilities as a species to attend to maintaining of a healthy Web of Life.
Around the world natural phenomena and spirits of place have revealed themselves to us in anthropomorphic forms.  These encounters generated stories that were told over the ages.  Employing the use of sacred masks especially created for this event by Lauren Raine, using rhythm and chant, narrative and movement, and current scientific knowledge (physics, geology, biology, ecology, climatology, et al.), we propose a ritual performance that offers all celebrants encounters with these goddesses, as they have been known in the past and as they exist today."

She invites story/voice and ideas from others in the evolution of this piece.  I touch the violet amethyst pendant I found in an apple tree in Glastonbury, which I wear around my neck feeling very much that it was a gift from the Lady of Avalon, and try to imagine how I might tell that story..........and what voice the Desert Goddess might have as well.............Well.  Time to take the plunge, pull out the threads and start weaving, re-weaving, and spinning. 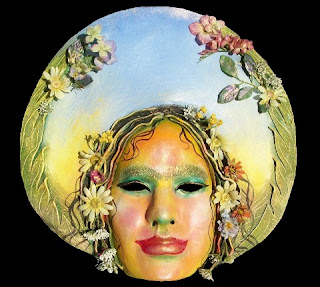 I'll begin my journey with the only Goddess mask I still have, Flora, the Roman Goddess of flowers, and originator of May Day celebrations (at least in Rome). Florence is also my mother's name, and Flora was the name of my great grandmother.  The mask spent the past 6 months with a woman who lost her son, and wanted the mask for healing.  I'm sure she has infused the mask with the beginnings of story..........Flowers are a good place to begin, they represent beauty, and the invitation to new life.

Fertility it is, insemination, all that. As far as that dream goes.......at 62, I'm way beyond May Queen.  Sometimes I feel more akin to Miss Marple.  But Symbolic it is. 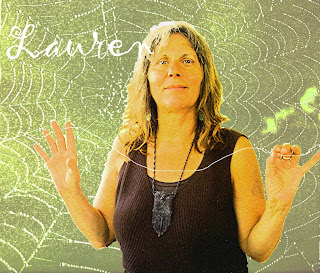 ** This is interesting!  When I went to "Preview" function before posting this, I noticed that there were many links (viewed only on Preview) to a blog called "Dakini Dreams". As I understand it, Dakini's can be seen as angelic messengers, muses, and spiritual guides or workers of energy, although the meaning in Tibetan Buddhism is much more complex and complicated.  But it is interesting that this otherwise "invisible" link always comes up, and is usually the only link shown,  when I check out "preview", or look up comments from my Blogger Dashboard...... I've never thought much about it, but here's a recent example of how it comes up, although it doesn't show in published comments, etc.:

Great Synchronicity, no?
Posted by Lauren Raine at 9:30 AM

A GREAT ritual proposal!! I know what you mean about the kickstarter thing. I've been toying with that idea to help pay the rest of what I owe the builder for my new studio. The grant covered most, but not all. I am thinking about indiegogo - you might check that out, supposedly they're a little more flexible on some things. Don't know why I'm in "frozen" mode... good luck with this all!

Thanks Valerianna...........well, I'll start tomorrow. I just know another collection needs to be made and available. So we'll see how it goes!