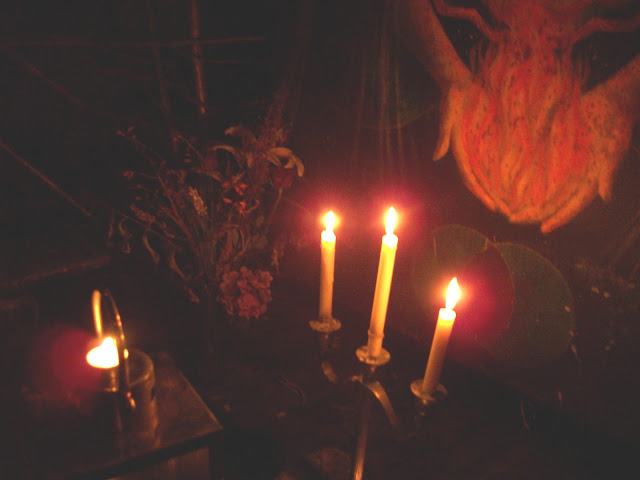 "The deepest spiritual energies of the Red Spring relate to the future:  to the emergence of a reborn and rebalanced divine masculine energy that can complement and eventually conjoin with the Goddess energy that is so venerated in Avalon.  This last stage of the alchemical work, involving the balanced union of a rejuvenated solar king-god with a goddess-queen in a symbolic heart centre, such as the pool in King Arthur's court, has long been delayed by our deep neglect of the divine feminine.  Since the recent cleansing of the White Spring, the spiritual and healing powers of the two springs can now manifest in a more balanced way."

Nicholas Mann and Philippa Glasson, "The Red and White Springs of Avalon"


I seem to be unable to leave Glastonbury.......my plans of travelling to Scotland, and then Cornwall, are frustrated by the fact that it's high tourist season during the month of August, and virtually everything is booked up, and the price is also doubled!  I haven't been able to find a B&B, a hostel, or a hotel that had a vacancy, or that  I could afford.  Yet I have kindly been offered a spare room here by a priestess from the community.  Many circles of my life seem to loop and complete here.....so I feel certain that Avalon is where I should be, and the Lady of Avalon has something to stir in me.
This has been a pilgrimage place for countless years...........from the Stones of Avebury to the great ruined Abbey of Glastonbury, people have come here, and they continue to come, many  I suspect, not really knowing why, but drawn nevertheless.  They come to touch the Holy Places that have  their ultimate source in the body of the life-sustaining, mysterious, creative, deep powers of the Earth.  It's good if you can do it in a sacred manner, if you can approach with reverence - but when confronted with the beauty and magic of these places, I don't know that it's necessary.  You leave changed.

Yesterday I walked to the White Spring, one of the two Wells of Glastonbury. The Red Spring is the Chalice Well, and it's waters carry red iron oxide.  The White Spring leaves a white calcium residue where it runs.  The White Spring is underground, and illuminated only by candles, which were tended, when I was there, by a young man who reverently changed them and kept the space.  I thought of the Roman term for a priest/priestess - the "Flamenalis", the one who lights the flames, and tends the sacred flames, holds the space for others.

I entered the dark blind, and only gradually saw the interior with the help of candlelight.  Ah, the intensity of that space, the sound of the running water coming from the underground spring, the big dark stone pool illuminated only candles, the whisper of a few "pilgrims" actually taking their clothes off and quietly climbing into the pool.  People have set up different shrines in niches of the (large) underground enclosure, and a little Black Madonna figure is enshrined just over the Spring head.
There is a shrine for the White Lady of the Spring, who also seems to me to be the Lady of Avalon - she greets you as your eyes adjust.  I don't really know that.........the painting could also be offered to Bridget, from whose name the River Brue probably derives, and also, perhaps, the very name of the British Isles, Britannia.    Bridgit was the Goddess long before she became a Saint.

But I was drawn to a shrine created from twigs and branches, in the center of which was a candle lit painting of a  Goddess with offering, open hands.  I sat down within the shrine,  and truly felt as if I sat beneath the roots of a tree, deep in the Earth.


"She will Rust us with Blossom
She will Seal Us with Her Seed."

I think, in that place, the Goddess, by whatever name you may conceive of Her, can speak to you, and in with a gentle voice that sounds like the sound of water.  I used to write poetry, and the wellsprings of that seem to have dried up in me, but that, I think, would be the truer language to use when speaking about that hour of sitting within the Well.

**I have to add that I returned today (Sunday) and the space was a bit different experience (nothing could take away the sacredness of the Well), but the gracious and humble young man had been replaced with a caretaker  who was possessive and proprietary, immediately informed me in an aggressive manner that photos were "not allowed", and, to make things worse, kept flitting back and forth singing what I assumed she thought were inspiring sounds for the entire 40 minutes I sat within the Shrine.  She didn't shut up once, and finally, thanking the Waters, I gave up on my meditation  and left.  Oh well, maybe that's part of my meditation too. 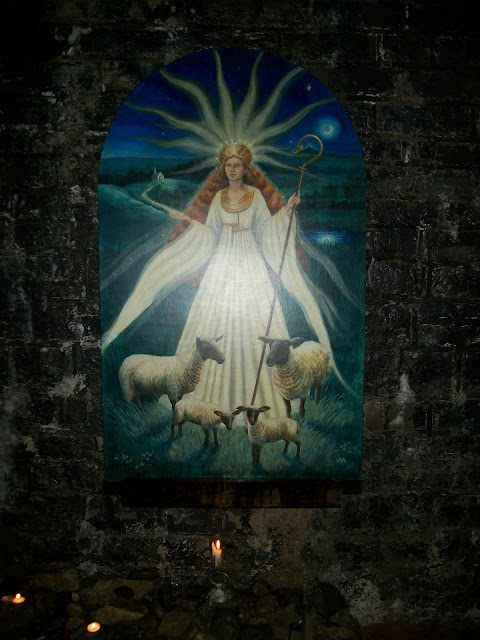 Labels: Goddess of the waters, sacred springs, the White Spring of Glastonbury

beautiful. so interesting to think of entering a dark space lit only with candles. love the root shrine.

Beautiful! I wait for the day I can visit there!!
I love that root-shrine, too. What a gift that the woman wasn't there when you took photos - wonderful - and too bad that she was tending today!

It all sounds just fantastic. Love the photos. I suspect the singer was part of the meditation, too!

Hi Trish, well there is something here they call the "Glastonbury Effect" - sort of comparable to pulling out your shadow for a bit of examination and balance in the course of becoming "en-lightened". Lack of patience is certainly one of my shadow qualities!