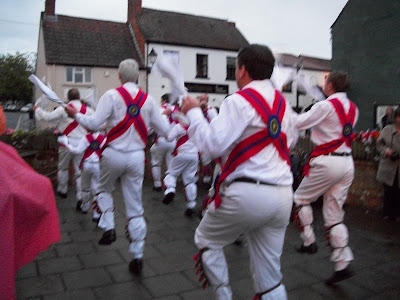 Here's a jolly group I literally ran into while having a drink at a Pub - the Chalice Morris Men. Here's what they have to say about themselves: 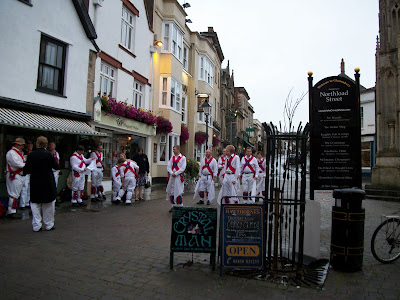 "Nobody is sure of the origins of Morris dancing, but we believe that it was based on pre-Christian fertility dances.  It has elements of circle dancing, resurrection and death and ritual combat deriving from our earliest pagan forebears.  The fertility dances (necessarily male) would have taken place on such ancient feast days as the first day of spring, the solstices or midsummer's day.  When the Christians took over the old festivals they would have danced on "high days and holy days".

During the 19th century, when most villages had their own Morris side, the custom started to wane.  This has left only a few places with an unbroken tradition of dancing.
In 1989 Cecil Sharp started to collect and record Morris dances after seeing the Headington Quarry men dance.  Although most of the dances that you will see were collected by Sharp, they, and the music, have evolved over the years.  The world of the Morris is clearly indebted to Sharp and his work.
People always ask about the bells, sticks and hankies.  the bells and waved hankies are supposed to ward off evil spirits while the sticks represent ritual combat.

Wow, love it! What fun you're having and thank you for sharing it with us.

What an interesting post and so is your blog. Great subjects!

Hi Lauren, thanks for the kind comments, I feel I must point out the slight typo. re: Cecil Sharp, it was actually 1899 not 1989, that would have made him 140 years old!
Thanks again.