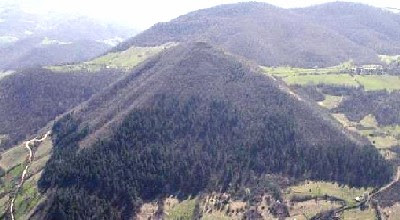 Here's something else I encountered at the Glastonbury Symposium - I had never before heard about the controversy concerning a possible pyramid complex (3 aligned pyramids, with the "Pyramid of the Sun" being the largest).  If, indeed, these are, as a number of archaeologists think, man-made structures, then this is the largest pyramid in the world,  far exceeding the Great Pyramid of Egypt.  For anyone who has not heard of this, it's fascinating to contemplate.  Here's a great article about the "Bosnian Pyramids".


http://www.philipcoppens.com/nap_art4.html
"Visoko is within the catchment area of what Lithuanian–American archaeologist Dr Marija Gimbutas (1921–94) labelled "Old Europe", a civilisation also known as the Vinca culture. This culture is dated to roughly 6000–3000 BCE, and many believe that it inspired other cultures, including the Sumerian Ubaid period. Examples of Vinca statues have been found as far west as southern France. As recently as November 2007, archaeologists excavating a settlement in southern Serbia, believed to be at least 7,000 years old, announced that this civilisation had great expertise in creating bronze artefacts—a discovery that requires a radical re-dating of the Bronze Age.

Still, few have heard of the Vinca culture, and here, too, western bias might well come into play. Indeed, the old pyramid paradigm is not merely being held in place with sticky tape, but the notion that Sumer and Egypt were the cradles of civilisation is one that should have been thrown out of the history books many generations ago. In this instance, the personal crusade of Australian-born archaeologist Vere Gordon Childe (1892–1957) forced the Vinca culture to be seen as an outlying cultural entity influenced by more "civilised" forces. Childe's dogmatic stance and clout meant that the Vinca culture received only scant attention and today remains largely unknown. 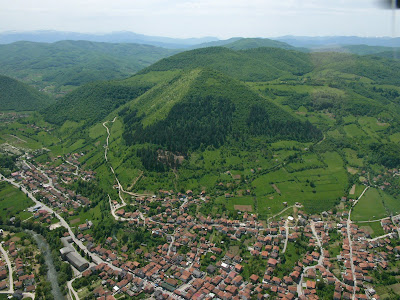 So, what is the Bosnian Valley of the Pyramids? The Pyramid of the Sun, which dominates the skyline over Visoko, has been the main focus of investigations. The structure does not merely look man-made, but with a height of 220 metres it is much higher than the Great Pyramid of Giza and thus would be the tallest pyramid in the world.

As is the case with the Great Pyramid, each side of the Visocica Pyramid of the Sun is perfectly aligned with the cardinal points. Indeed, as one approaches Visoko, it is hard to believe that it took until 2005 before someone seriously pondered the notion that the hill could be a pyramid. The bottom of the Visocica Pyramid has been built upon, and the streets of Visoko are extremely steep. Most interestingly, Osmanagic was told early on in his research that several home-owners in Visoko had wanted to build cellars but could not because of a cement-like layer hidden approximately one metre below the surface. During the civil war of the 1990s, it was reported that the hill resonated when hit by artillery fire: whereas artillery impact normally produced a sound that lasted one to two seconds, when it hit the hill it created a type of echo that lasted five to six seconds. It was clear that the hill had something unusual about it.
Philip Coppens 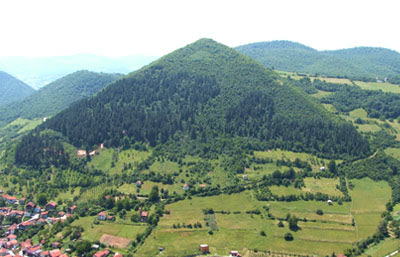 Wow, fascinating. It sure does look like a pyramid to the naked eye. Cool, just what we need, a new "discovery" to shake up our world view and bring us to humility again!

Your trip is unfolding with such beauty! These photos remind me of the lost city i Columbia - kogi indians. Maybe not as high in altitude, but certainly as high in knowledge.