I was going to delete this article from my website (I wrote it in 2005),  but just didn't have the heart to.  Recently I drove by where the Muse used to be, and as always, sigh.  Since it was torn down in 2005, and whatever deal was made fell through, ironically, it has remained a city block wide, fenced hole in the ground.  A big hole.  That kind of says it all. 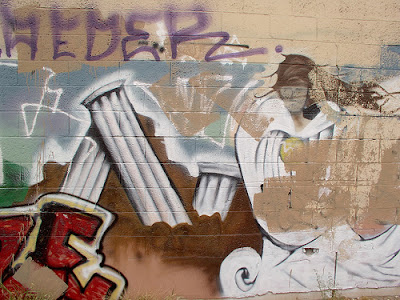 Farewell to the Muse. You will be missed.
Copyright Lauren Raine 2005
**As i write, that's no longer seemingly so true.  The recession has been pretty good for artists, at least, art spaces seem to be re-appearing.
Posted by Lauren Raine at 10:15 PM

How very sad to see this destruction and to hear the attitudes of the entitled.
Where I live artists and creatives always have space and respect.However along the beach front, McMansions have replaced the old shacks.So very sad to see the old places go and I wish I'd documented them. Fortunately a Starbucks 30kms away had to close from lack of interest..we like real coffee!